On their seventh album, Taking Back Sunday are more fearless and ambitious than ever. Tidal Wave is the damn proof that they’re a band of with their own sound, own standards and own attitude. Adam Lazzara told to us all about it and there was still time to go back in time and talk about their turning-point 2006’s album, Louder Now.

Before getting deeper about your new album, Tidal Wave, I want to mention your album Louder Now, which was released 10 years ago and it was definitely a milestone in your music career. How do you look back to that album and what do you take from that now that’s been so long and you are still going strong as a band?
First of it, it’s hard to believe that’s been so long since we released Louder Now. I think during that process, it was the first time we worked with Eric Valentine and then for us I think we were at a point where we wanted to try to set ourselves aside as a rock’n’roll band and that’s something that we’ve kept with us throughout the whole rest of the journey so far.

“MakeDamnSure” is probably one of my favorite songs by you guys and it was the first single of Louder Now. Do you still remember how was it like to write that song?
I remember that we had a starter kind of a much faster when we first wrote it and then it wasn’t so fast when we demo it a few times. We just kind of decided to slow it down a bit, which is still up-tempo, but it’s not that fast, and that’s when everything started to fall together as far as the melodies and other things coming out for it.

What was your favorite track off that album?
It’s hard for me to pick one. I think there’s something very special, exciting and unique about each one and that’s why I like the record as a whole.

So, back to Tidal Wave. It’s your seventh record and it’s quite impressive how you guys keep on innovating and expanding your sound and approaching new ways of exploring it. This album is so energetic, dynamic, diverse and ambitious. What was your mindset while going into work on it?
For us, with Tidal Wave being our seventh record, we understood that we were kind of fork in the road… Normally with other bands or artists, by the time they reach their seventh record, they’re very set in what they do and we’ve just never wanted that for ourselves. We wanted to try the best we could to keep evolving, to keep moving forward and just kind of take it through snapshot of the people that we are right now. I think that we’ve accomplished that with Tidal Wave. It’s always scary going to any recording process, both because you want to impress your bandmates, but also you want to impress the listeners. I couldn’t be happier with the way this came out.

I read that this was the first time that you guys wrote in the studio as you recorded. How was that experience and what benefits did it bring to the band’s dynamic?
It actually works out great for us and then after this process we kind of realized that’s just the way we’re gonna write for a while. The thing is typically it’s the same when we wrote for any other record, the only difference is right after we were done like of working on a part or learning something new, we could put our instruments down and immediately walk into the other room and listen to what was there. When you do that, you can automatically hear what it is working and what it isn’t working, so it’s safer a lot of times of arguing basically because you can just go in and hear it right there in real time. It kind of gave us a new perspective, not only as a song as a whole, but also the digital part and being able to develop that as well. 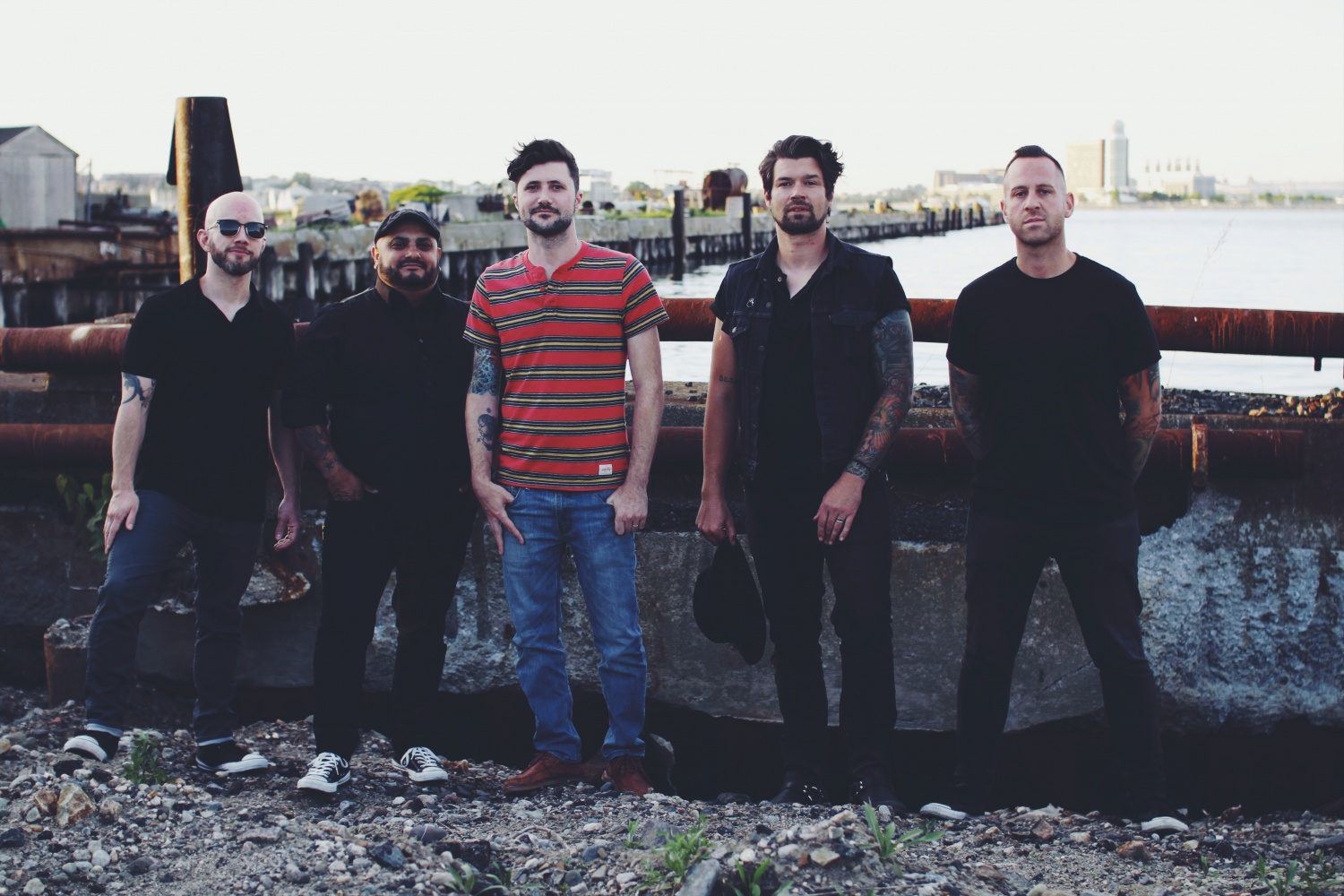 “We wanted to try the best we could to keep evolving, to keep moving forward and just kind of take it through snapshot of the people that we are right now.”

The title track has this vivid Ramones vibe and it’s just awesome. How did that song come about?
Yeah! [laughs] Well, John [Nolan, guitarist] had this idea on an acoustic guitar and it was very folky and he basically just had that first line for the song that is “So what’s gonna happen when the old man goes”. We were all sitting around and he played it for us and then our drummer Mark [O’Connell] said to John “We should make a song out of that, that could be great”. Then about a month later, John came back with that and said “I made a song out of that part, let’s try it out”. At first it was very folky kind of singer-songwriter stuff and then once the band got a hold with it that’s when it kind of turned into this Ramones kind of Clash inspired song, which was also one of the first songs that really got the ball rolling for the recording and writing process. I think it’s the first time we realized that it’s ok for us at this point to wear influences right under our sleeves, you know? I guess in the past we were worried about that, but through realizing that it was something that was really freeing for us. It opened a bunch of doors.

Musical wise, were there specific records or bands that highly inspired you guys?
We all have very different tastes in music and I think that’s one of the things that makes our band work, but also there’s certain common threads. With this record, I think everyone was bringing in their individual things and their individual influences, which kind of made up for this grand collaboration of all the music that we listen to now and what we listen to since we were kids.

There’s this sense of home in some of the songs, like the tracks “Call Come Running” and “Homecoming”. Was your hometown in some way an important reference to your writing process?
It was! For this record when we started writing, John was expecting a second baby – he’s born now – and so we were looking for a place to write that was close to our homes. John and I live in the same city, and so that way he could be home to help. Once we got into the studio and started writing, we just liked that place so much that we decided to record the whole record there. We all live in different places – two of us are in New York, two of us are in North Carolina and one of us is in Ohio – and so normally when we get together a lot of us are staying in hotels or unfamiliar places, but with this record the guys either stayed at my house or at John’s house. There was a big sense of home and community during the process, which insert its way into the record.

The new album was produced by Mike Sapone (O’Brother, Mansions) in Charlotte, NC and mixed by Claudius Mittendorpher (Weezer, Drowners, Ra Ra Riot). What did they bring to the recording sessions?
It was great! We’ve known Mike Sapone for a long time and he has this ever expanding and growing musical taste, so there’s a lot of examples and things that he brought up to studio that just got our brains think differently than just how they typically do, which was a big help because then if you got stuck on a part or on a song, he would suggest something that was way out of that field and that got everybody thinking differently. All of the sudden we realized that the possibilities are endless and we’re no longer stuck. That was one of the things I like about working with Mike. And then Claudius was just great. He has his way of making things sound quite larger than life. He mixed Happiness Is (2014) and that’s why we wanted him mixing this record as well.

Regarding tour plans, you guys have just announced a UK/European tour for February 2017 with Frank Iero And The Patience. What can we look forward from these live shows?
Frank is always great to watch! For us we’ve been so wrapped up in this record that we just worked so hard that we’re really excited to get out there and play it for people. The idea that we can travel that far from home and still have that connection with people is something that just blows my mind anytime we’re able to visit and play over UK and Europe. I think for anyone who’s going to the show, you can expect 100% from us because that’s not the kind of thing you can take for granted.