With a legion of fans all over the world and always releasing impressive records, Blessthefall take another step forward with their latest record, To Those Left Behind. Inspired by the period of time he was away from his family, frontman Beau Bokan take on the band’s new record is way more personal and he told us all about the concept behind it, plus how they keep reinventing themselves as a band.

To Those Left Behind completely exceeded our expectations and by the fifth record you managed to deliver yet another rad album! How have been the reactions about it?
Right now we’re playing four songs live in our set and usually when we put out a new record we play one or two just to kind of test the waters, but the feedback was so good for all the songs on the record and we’re like “Ok, so what will we play?” [laughs] It seems like everyone really enjoyed the album and I think it’s also an album where every song has something special to offer, so you can listen to the whole record and not just three or four songs. I think it will take a little bit to really grow on people and give them a chance to sit and listen to all the songs. So far, the response has been great and when we play the songs live, it’s so cool to see people singing the new songs. It’s just makes you feel like you’re accomplishing something. [laughs]

As a band and as musicians, how do you keep reinventing yourselves and keep moving forward with each album released?
It can be pretty difficult in every record to improve on your instrument, but I think that’s just what we try to do, just improve in our own instruments. I try to become a better singer with each record and Eric and Elliott better guitar players, and so on… I think with that we just push ourselves to improve and naturally you’re gonna write better songs if you push yourself as a musician, so that’s kind of what happens. There hasn’t been a big jump or change in our sound, you know? I think it’s just our sound is evolving slowly, which is awesome. We’re trying new things with every record, but we’re not giving you an album of a totally different band. [laughs] I think that’s the important part.

Was easy the transition from Hollow Bodies to this new one, To Those Left Behind?
With Hollow Bodies we kind of found a new sound, especially going with Joey Sturgis who kind of turned what we were doing and made our sound bigger, massive and strong. I think going back with Joey we wanted to continue with that and with this new record, I think we wanted to explore some of the more ambient and softer side of things as well and kind of balance the record. I think there’s a little bit more creativity as well on the new album.

The title of the new album suggests that its theme is dedicated for some people in specific, so who are ‘those left behind’?
It kind of describes the theme that’s going on throughout the album. I took from personal experience, like the things I went through. It stands from leaving for tour and leaving my family – my daughter and wife – and that anguish that I kind of went through. I was obviously able to talk with them on the phone, but I couldn’t be there for them so it kind of felt like I was a ghost. I wanted to write a story about something about someone who’s left this life and moved on to the next life, but hasn’t left completely. He’s trying to connect with the people that he still loves. It kind of gets a lot of metaphors and it’s pretty cool. It got pretty cool visuals and so that’s where that title came from.

Like you were saying, being away from your family while on the band duties was something that inspired the lyrics for the new songs. What can you tell me more about the writing process for your lyrics?
Like I said, I really wanted to kind of tell some cool stories, but keep it based on things I was going through in real life. I was also inspired by a lot of movies and TV shows like American Horror Story, The Walking Dead, The Crown… All of my writing is based on things I’m inspired by and things that I love in life. [laughs]

What’s great about this record is your ability to write dynamic, brutal songs. Tell us a little bit about how was your take on this new effort and what’s new this time around.
We started writing a year ago. We spent months and months, we had all this time to write. [laughs] We had a bunch of ideas and then also we wanted to try something different. Basically between Blessthefall and my old band, I’ve written five albums worth of lyrics and melodies, so on this record we wanted to try to work with some cool writers, to bring someone in as like a sixth member of the band. There was one guy named Erik Ron from LA that we started working with and he’s just an amazing guy. He has some amazing melodies and ideas. He and I just got along really well and he was kind of my partner in there. He helped me writing and we came up with really awesome stuff. It was the first time we’ve ever done anything like that. 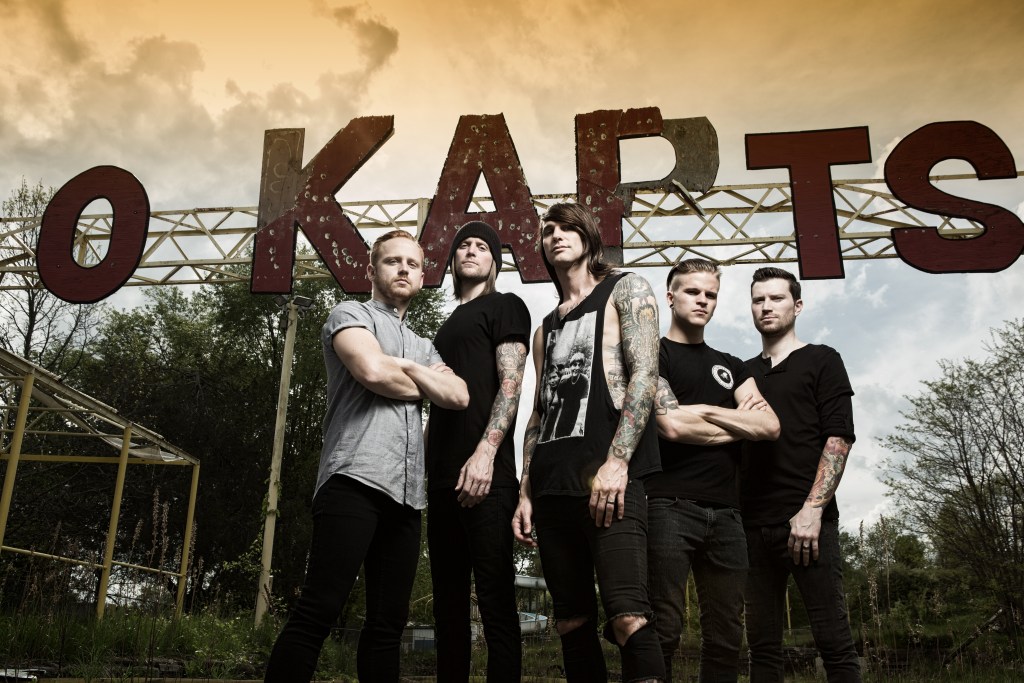 “…we wanted to explore some of the more ambient and softer side of things as well and kind of balance the record. I think there’s a little bit more creativity as well on the new album.”

You guys worked with producer Joey Sturgis – who has worked with bands like Asking Alexandria, The Devil Wears Prada, Of Mice & Men. What did he bring to the mix and how was it like to have him on board?
Joey is a mixing master. He really can take something that’s very simple – like recording a guitar, some drums and stuff like that and he just has his way of mix it and produce it to make it sound huge and right in your face, you know? I think a lot of other producers try to copy him and emulate his sound because is so unique and so powerful, so I think going with him was a great idea. [laughs]

“Walk On Water” is probably the heaviest song on the record and the music video for it, directed by Raul Gonzo, is beautifully chaotic. How was it like to shoot the video for such intense song?
“Walk On Water” was one of the songs that we were really like “Ok, that has to be a single. This song is insane.” [laughs] We were on Warped Tour, we were playing “Up in Flames” already and so we were like “We need to do a video at some point.” It was very last minute and we picked Raul Gonzo to shoot the video because we had a day off in Northern California and he was there. He had about a week to prepare and he’s great with visuals and very artistic. We wanted a more artistic approach to this video in particular. As you know the other videos were a lot of performance, running around and doing crazy shit. He created something really awesome with what we had. Elliott is kind of yelling at the end, he’s very desperate. His ranging screams while under water are really powerful, especially with the lyrics and stuff. It came across awesome and it didn’t take very long actually. [laughs] It was really fun.

What’s the song that stands out the most for you and why?
Oh, that’s hard. [laughs] As far as just a song that stands out the most, I think “Keep What We Love & Burn the Rest” just stands out because it sounds like a R&B song, you know? It sounds so different than anything we’ve ever done and I think that it was really fun exploring that side of music and that side of my vocals. It was actually pretty cool to just step outside the box with that song. I think it’s something that we might explore even further, maybe on a next record or maybe have a couple of songs like that. That song and “Dead Air” is actually one of my favorites and stands out too. It’s just a big, epic song and there’s no heavy breakdowns or anything like that. I think we always have a couple of songs like that on each record like “40 Days…”, “Hey Baby, Here’s That Song You Wanted” and “Bones Crew”. We listen to everything. We love metal, but we love pop songs, we love R&B and stuff like that… We want to really lead that influence on to give us more and on those two songs we show that.

It’s really awesome that you guys explore and listen to other genres besides metal. What bands are you currently listening to?
I really love Purity Ring, I listen to them a lot. Just cool melodies and really amazing sounds. There’s another band called Broods that my wife showed me and it’s kind of a mix of Purity Ring because it has a female singer. It’s kind of digital, but not totally digital. It has some Ellie Golding kind of vibe. I’m pretty drawn to female singers, I don’t know why. [laughs] I just feel that the female voice and those melodies are so much more appealing to my hear I think and it’s very comfy to me. I get influence by that too. [laughs] Those two bands and a band called Pvris that we’ve toured with. We toured with them and I got to watch them live. Lyndsey is amazing and everyone in the band is amazing. What they’re doing is really cool, because every time when there’s a female in a rock band, everyone just immediately assumes that they are all Paramore and so they’ve kind of broken away from that mold and they have a really cool dark vibe to it. She has a different approach to her vocals, kind of bluesy and soulful. I think it’s awesome.

TO THOSE LEFT BEHIND IS OUT NOW VIA FEARLESS RECORDS