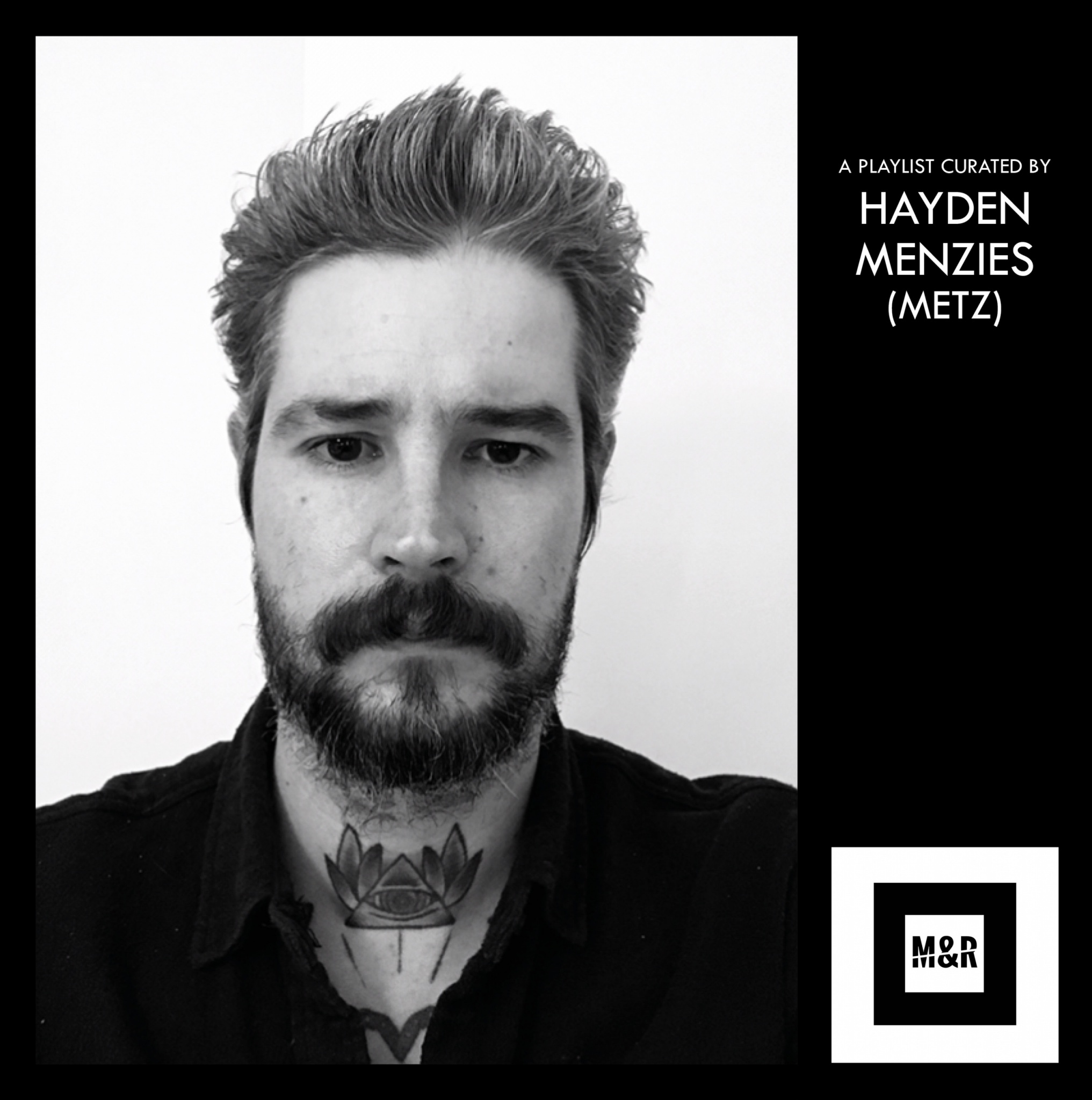 We’re asking musicians what music they’re currently listening to, and this curated playlist comes from Hayden Menzies of METZ.

Automat was released last year and is a collection of METZ non-album singles, B-sides, and rarities dating back to 2009, available on LP for the first time, and including the band’s long out-of-print early recordings, out now on Sub Pop.

Below you have the tracklist, the playlist and Hayden comments on every single track, enjoy!

(Union Of ) URANUS – “Believer”
“This band was a big deal right around the time I started going to shows in Ottawa. They were so heavy and really tight. I was floored every time. It was bands like this that made me want to start a band of my own. They had legit gear, a van, booked their own shows and practiced a lot. That’s all I needed to know. I was hooked.”

CIRCUS LUPUS – “Unrequited”
“A hand me down CD from one of my older brothers and I loved it. Punk could be weird and catchy at the same time!”

SWEETBELLY FREAKDOWN – “Victim’s complex” *
“I can’t remember how this one got into my hands, but it was around the same time as The Monorchid and Circus Lupus were on heavy rotation.”

SUPERCONDUCTOR – “There goes Helen”
“This was a Canadian band that my oldest brother said had 9 guitar players. That probably meant that they had a lot of guitar players come and go, but I heard as “ 9 guitar players at the same time!”. I always envisioned that stage.”

RORSHACH – “Pavlov’s dog”
“Cool mix of metal and hardcore. The singer’s vocal approach changed a lot between 2 of their records. It may have been related to a health issue.”

OTTAWA – “Holy of holies”
“I think I liked the sample at the beginning of this song better than the actual song at first, but it rips.”

NATION OF ULYSSES – “Shakedown”
“A classic example of style as well as musical inventiveness and proficiency. They were the full package and spared no expense making their shows, their songs, their artwork all fit their overall aesthetic without coming across as a gimmicky.”

THE MONORCHID – “Midget housing” *
“Really got into this band and still play it from time to time at home. They had a cool snotty, arty but gritty sound compared to what other bands were doing around them.”

LUNGFISH – “Put your halo on”
“Admittedly, this band was over my head when I first heard them. When I finally got a clue, I was pretty smitten. Their repetitive, minimalist, poetic style was very earnest and direct and they seemed so committed to serving their songs as one entity that it was inspiring.”

HOOVER – “TNT”
“Hoover was the first show I ever went to. Ever. It was at a punk house/venue called 5 Arlington in Ottawa. I know it gets said a lot, but it was life changing. They had groove and discordant, angular songs and they scratched this itch I didn’t know I had. They’re still one of my favourite bands.”

HEROIN – “Meaning less”
“Another fraternal hand me down. I liked their name.”

POISON IDEA – “Just to get away”
“Yet another brother suggestion. I think it was in a skate video too. They always sounded tough.”

ICONOCLAST – “Wit’s end/Nevermore” *
“This band was the prime example of what was going on in some sub genres of post hardcore in the 90’s. It was heavy as shit, but had rototoms and Jazz time signatures. What the fuck?! Cool.”

DROPDEAD – “Bullshit tradition”
“This band scared me when I saw them live. They had to just drape the bass player’s guitar over his shoulders for him. When they started playing, he was lightning fast. They were super nice after the show and I recall them saying they built their own trailer for that tour and it was “sketchy” to drive with.”

CLIKATAT IKATOWI – “Science Fiction reality”
“Loved this band. Their name, their album art. It only helped that the incredible Mario Rubalcaba played the circles in this band. I just thought they were the coolest thing.”

THE CROWNHATE RUIN – “Late arriving rock dudes”
“An extension of my love for Hoover as it shared members. Pretty sure this was the band that the drummer (Vin Novara) nailed his kick drum to the floor when I saw them.”

BARKMARKET – “Peacekeeper” *
“A producer “supergroup” project. I didn’t know what a producer was at the time, but it sounded heavy.”

BORN AGAINST – “Well fed fuck”
“I’m not sure exactly why, but this band become a favourite between my brothers and I, much to my parents’ chagrin. The ‘9 Patriotic Hymns for Children’ record was played pretty much every time we got in the car together. They were clearly a pretty charged group of people in this band and they were scrappy, sarcastic, poignant, abrasive. Perfect.”

* tracks not available on this playlist, Spotify has a lot of gems but not all… sorry!

Automat is out now on Sub Pop.