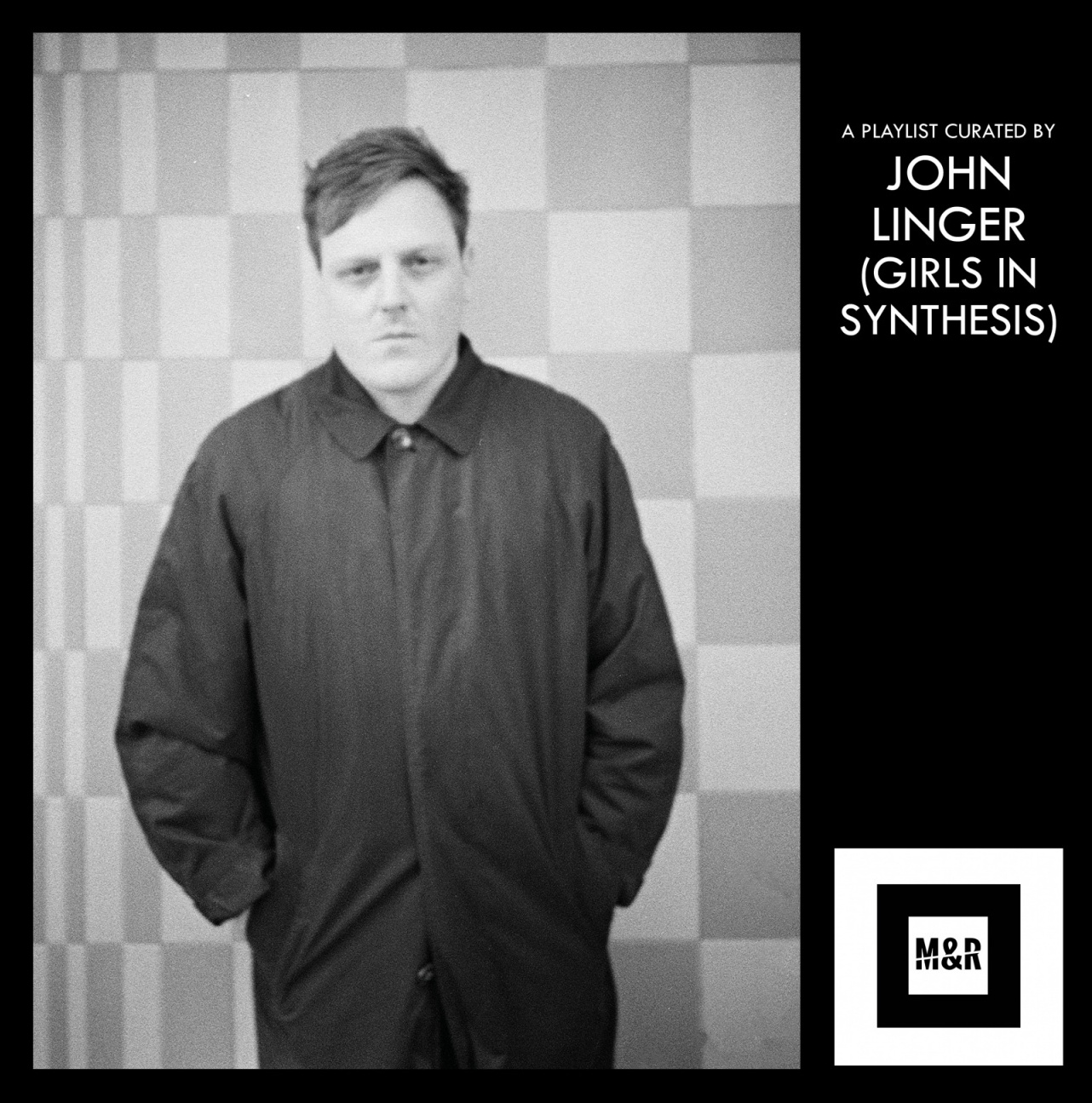 After a deserved break, we’re back on track…

Here’s another curated playlist created by John Linger of Girls In Synthesis. Now Here’s An Echo From Your Future, the long-awaited debut album from London-based experimental punk trio Girls In Synthesis, originally scheduled for release in May but put back due to the current pandemic, is out now via Harbinger Sound.

Below you have the tracklist, the playlist and John comments on every single track, enjoy!

“They were very much an influence during the formation of the band… they obviously had more of a fun way of making music, but the sounds are pretty harsh and unforgiving. The guitar sounds like an electric tin opener. We sort of stole that sound a bit. We bumped into Jowe Head (S.M’s bassist) in the elevator at Gun Factory Studios during our second rehearsal. Spooky…”

“We don’t listen to a huge amount of punk or guitar music. There’s something a bit sinister about only listening to music that resembles your own… this is an obvious choice for a dub track, but it’s an absolute killer. Our drum and bass parts are hugely influenced by dub. And disco.”

“I never used to like Wire, but it was a band we bonded over while travelling to play shows. I now think those first three albums are quite brilliant, really. You can feel that their influence has seeped into the more “arty” end of contemporary indie or post-punk. There was a detachment that was initially off putting for me, but those early records truly do sound like nothing else.”

“Amazing British jazz funk… you can say what you like about disco and jazz funk, but there’s so much rawness and repetition in some of it that I see it as a parallel to punk, and especially post punk, in many ways. That relentless, groove based repetition. Love it. Again, a huge influence on our rhythmic foundation.”

THE VALENTINOS – Sweeter Than The Day Before

“There’s something amazing and raw about those mid 1960s soul records. When in the hands of a great singer, that pure, visceral emotion is so direct and the lyrics feel like they’re addressing you alone. That’s how we try to connect with our audience… a lot of people can’t understand what we’re saying/shouting sometimes, but they get the gist of it. Hopefully.”

“I’ve chosen a live version of this song because although the sonic quality isn’t as good as the studio version, you get a real insight into how intense a live band they must have been during this period. I would say that The Fall were a foundation in the formation of GIS, but I don’t think you can really hear it musically. It’s more of an attitude thing, a work ethic thing. The Fall seem quite a trendy band for people to ape these days, but I think they take the wrong elements from it. It’s no use trying to be Mark E Smith, it’s a futile gesture. But you can learn a lot if you actually listen…”

THE MAD LADS – Ten To One

“It could be posited that reggae, and Jamaican music in general, is one of the most important musical progressions of the modern age. Again, we go back to that rawness… creating music as beautiful as this with limited funding and hand-me-down recording equipment is a triumph against adversity. The rough edges aren’t polished off, and that’s the appeal in a lot of music from that era. The imperfections make it perfect.”

“Thought I’d try and be a bit more current… we don’t listen to many contemporary bands, we like to focus on what we’re doing, but here are what I consider to be the best band in the UK at present. Off of their self titled debut album, it made a huge impression on me when I first heard it, and it’s nice to know that ever as you get older you never stop having these awakening moments. Everything they’ve released so far has been great, so get on it if you haven’t heard them.”

“A great disco track by what I understand to be a sort of cabaret band from New York. Anyone I’ve ever played it to has loved it. It’s another tour van classic. Not matter how noisy or aggressive our music gets, we always want it to be danceable to some degree, so this type of music very much informs what we do. There’s a bit of a psychedelic vibe to it. You can tell they’re white, but I think that adds to the oddness of the track. It’s quite unlike anything I’d heard before, although there is a good late 1960s track, ‘Mirrors’, by a US band called Fire and Ice which has the same ‘cabaret/showband’ type strangeness to it.”

“It’s always really exciting when I see people buy this record… obviously the A-side was a massive UK hit single in the 1970s, and it is a good version, but the dub b-side is a killer. We very much took a lot of influence from this, and also Dennis Bovell’s Pop Group/Slits production, for our own dub remixes. We’ve tried to do as many as we can, the recent singles have dubs, but you have to really be in the mood to do them. It’s about reducing our huge wall of sound to something more minimal and bare. It’s a hard task.”

Now Here’s An Echo From Your Future is out now on Harbinger Sound.