What good advice would you give to yourself? That’s probably what Basia Bulat asked herself while writing her new album, Good Advice, and the outcome is songs full of great advices. Basia told us delightfully what inspired her for this effort and how exciting her live shows supporting it will be.

How’s 2016 starting off for you?
Pretty good! I’m in New York right now. We’re doing a bunch of radio sessions and things like that, just getting ready for the record to get out which is really exciting and I’m enjoying it. [laughs]

It was back in 2013 that you released your amazing album Tall Tall Shadow. Between back then and now, what did you take from those last years as a musician?
It has been happening a lot. [laughs] Tearing that down into two sentences could be the whole interview… I think I realized that there’s so much to learn and I wanted to keep pushing myself to do things that scare me or seem different or seem like maybe I don’t belong in anything that I seem to feel like a little bit of interpretation is what I want to explore. I need to go with whatever things that seem a bit uncomfortable, figure out why and then work on that.

Good Advice is another distinguished work of yours and it’s obvious that you went through something deeply heartbreaking, which inspired you to write these new songs. What can you tell me more about that?
The record had really coming out from a period of big changing in my life and I had a lot of questions and not a lot of answers, and that’s kind of where all the songs have come from. The funny thing about the title of the record is that I don’t think it really has a lot of good advices in there. [laughs] But I think it does exist. I’ve definitely been the recipient of some very great advice from a lot of good friends, but at the same time it comes a period of time in your life when maybe you can’t really ask anybody. Nobody else can give you the answer, you’re the only one who has your own answers, so that’s kind of where it comes from.

What good advice did you give to yourself while writing this album?
Just to listen. I think not just emotionally, but even as a musician… I think something that a lot of people talk about in terms of making music writing is an expression and getting things out, but I think another big side of it is listening. A big part of writing is just listening to what other people are playing, like when you’re in a room working on something or if you’re by yourself listening to what really comes out instead of just constantly trying to express. Sometimes there’s a lot of good that comes out of just listening.

For Good Advice you bring all these little details on the melodies creating bright pop songs, and the backing vocals give an impressive significance to your words. Musically, what was it like to write for this album?
In the past, I came from a much more kind of folk background and I was really interested in the idea of documentation as recording. I really love documenting what it’s happening in the studio and I love a certain era of recording in a certain era of music that kind of comes from that world. But because of necessity the recordings were documentary, but now I’m really getting interested and with this record it made me interested in using the studio as more of an instrument itself also and kind of lending the tunes and still capturing the feeling of the people in the room, but also being able to play with it and using the studio and the technology that’s available now to make something that feels new and that feels like now, but still doesn’t ignore where I come from in terms of loving the sound of a band playing together in a room. I’ve always loved having backing vocals. On all my records I tried to have a lot of backing vocals and that’s the other thing that I really want to keep on the record. Anything I do, I think it will always gonna have a lot of girls singing really loud and that’s something that has been really important to me. [laughs] I always wanna hear a lot of girls singing. [laughs]

You said that “Pop songs can take all those big statements and those big feelings that you have. You don’t need to necessarily have everything so detailed because everybody understands. Everybody understands those feelings.” That’s a great way to put it and it fits with the whole album. When you were working on this album, did you know that you wanted it to sound it that way?
Oh yeah, I think in part of it I was writing it and I wasn’t really aware of what I was exactly writing. It was just coming out because I was listening to whatever was coming out. [laughs] And then I realized… I mean we’re so influenced by the best and big form of art sign, I think it’s because the world is so diverse now and everybody is able to connect from all over the world, everybody is able to get in touch with each other from across oceans. The kind of manouche of what we feel or like the particulars and obviously life is very complex, but there’s still kind of like certain emotions at core that everybody can kind of connect to you and sometimes you can put your own selves into whatever you’re hearing. A big part of whatever you’re hearing or whatever you’re feeling is coming from you and not necessarily from the song, so that’s what I kind of like about the form that you keep using it as a channel. You’re not telling people what to feel or what to say. You’re kind of giving people a bit of a medium from which they can have themselves in the song. 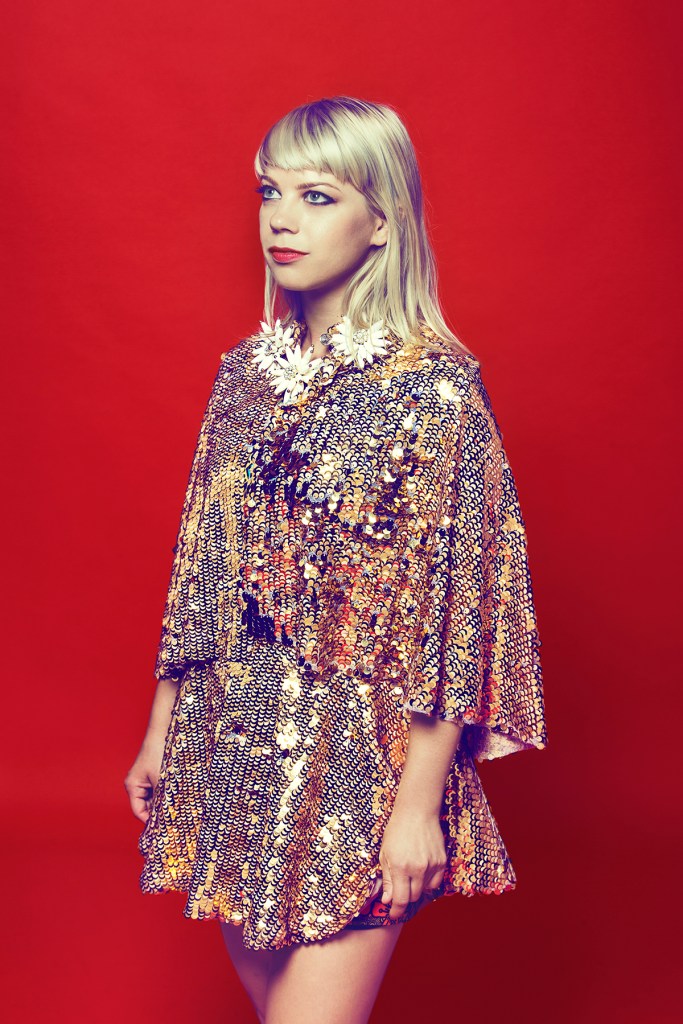 You collaborated with Jim James (from My Morning Jacket) in Louisville, and it was your first time recording an album outside of Montreal. How did you get together?
We met a few times over the years like touring and we ended up becoming friends, and I ended up asking him if he would be interested in working and producing a record or working on something with me. I sent him some songs and he was very excited about it and suddenly was like “When can you come down?” [laughs] It was really fun. It all happened really fast and really naturally.

Good Advice was created during three visits to Kentucky which is a long-drive. Was it liberating for you to do these trips to a different place away from home?
It was really fun and driving down to Kentucky was kind of part of it, because it’s a long drive but it’s not that long. It’s about 9/10 hours, maybe a little longer if you’re stuck in traffic and maybe you can do 12 hours. [laughs] It’s a long drive, but you can do it in a day. You get up early and you drive, and at the end of the day you feel like pilgrim [laughs] or some kind of track. It made a big part of it. It made me feel like… There’s something really good about getting far away from home and then you feel like “Ok, now this is my time to work” and then eventually it became another home to me. It was really quick! I mean, it’s a very close music community and I got to know a lot of people. It’s a really special place.

The whole record is remarkable and cohesive, but the closing track is just phenomenal and magic. A beautiful way to end the record. What can you tell me about the track “Someday Soon”?
Every single interview I’ve done for this record has mentioned this song to me, every single person I talk to about this record so far and they say that’s their favorite song. It’s incredible! I’m shocked by it, I keep thinking that I should put out this song first. [laughs] It’s nice to see that everybody is listening the whole way to the end to get there. I think the song is really coming from a place where I wanted to reflect everything that I was going through. Yes, I was feeling a lot of pain and a lot of sadness about the end of important relationships in my life, about big changes and I had a lot of fear of the unknown and the fear of being alone, but then I also felt like so grateful for this time I spent with somebody who changed my life. I wanted to be a real message of love or peace or something of letting go.

By the way, which song off the record stands out the most for you?
It’s funny, I don’t like to have a favorite. I’ve been listening to the record a bunch, but right now I’m trying to work on arrangements to play them live and I’m really loving “The Garden” because I’m gonna try to do something really special with it for the concerts. It’s such a free form kind of lowing keys and I really love the saxaphone on it, so I’m gonna figure out a way. Maybe it’s gonna be a little of a surprise in the show. We’re gonna see. [laughs]

In February you hit the road for a handful of live shows through Canada and the States. What are your plans to make a visit to Europe and what can we expect from the live shows?
I’m planning to come in the spring to Europe and I’m really looking forward for it. A major feature of the record is this one particular very cool 70’s piano keyboard that is called RMI electra-piano and so first of all I’m trying to figure out a way to get it over to Europe that I can afford. [laughs] It’s a really cool piano from the 70’s. A lot of the prog-rock bands used that piano. It’s a really interesting instrument and it feels like is from space. It’s all over the album and so I really want to play this keyboard live. We’re doing a little bit right now in New York. We carried for the radio stuff we’ve been doing in New York and it’s really funny because it’s really, really heavy, but it takes a couple of people to carry it and everyone is like “Oh! This thing is so heavy.” We all agreed that we have to take it with us everywhere we go, it’s such a special keyboard. I’m pretty sure that we’re gonna make it across the ocean to Europe and go on stage. It will be fun. [laughs]

Lastly, what records or bands have you been listening to lately?
There’s a lot! I really love U. S. Girls. Meg Remy is such an inspiration to me. She has become a very dear friend and she is somebody who has really good advice. She’s a brilliant woman and an incredible person. I love her music so much and I love her new record Half Free, so that’s someone that I listen to a lot. I’ve been listening to a band called Twin Limb and they’re from Louisville. They’re two women who sing and play drums and accordion, and their new record is very beautiful which is coming out this year. They have an EP out right now. I’m listening to The Tallest Man On Earth a lot actually. I really love him and his music, so that’s something I’ve been listening to a lot in the last couple of months.

GOOD ADVICE IS OUT NOW ON SECRET CITY RECORDS