For most, a few listens to Corrections House’s debut was enough to certify that beyond the hype and the pedigree, there was something alchemical at work, and with How To Carry A Whip, that opinion has become fact. An avant-industrial monster, it builds on what came before and adds flesh and meat to the bones, and co-vocalist Mike IX Williams tells us what went in to its creation.

It’s good having you back. Did you always plan on a second album?
Of course we knew there was going to be a second record. We’ve already got the basis for stuff for a third record too, we just have to get in the studio and do that. We plan on doing this band for as long as we can. What I’m trying to say is it’s not just a one-off, it’s a full-time band and I think it’s really stupid of people that they immediately go, “It’s a supergroup!” and “It’s a project!” I don’t even know what makes a supergroup; just because someone’s been in another successful band and they get together with someone else in a successful band? We’ve always considered it a normal group.

Had things changed much in how you approached the second album?
Yeah, in a way, but then no. The first album was basically a culmination; we toured before we even had a record out together as four solo acts. That was the whole point. It wasn’t even called Corrections House. We were gonna do four solo sets – me, Bruce, Sanford and Scott doing our own little things, and then at the end we were all going to come out and do one big jam; a noise, improv type of thing. The first album is parts of that put together. Sanford was a big part of laying the basis, electronics and tapes for that. It came together once Sanford got in the band but with the second record, we toured Europe and America twice. We had been over to Europe, did Roadburn and a bunch of shows so we were more of a cohesive unit. The second record became more of an idea to have a band as opposed to pieces put together on a record.

Is there still an improvisational aspect of your recorded material?
Not really – it’s actually the opposite, because we write everything in the studio. The first album, the parts were written but then they were put together in the studio; same with the second record. I wrote a lot of my lyrics in the studio, the day before and right around; a lot of spontaneous stuff. Then I learned the songs from that.

How was it having Sanford resuming production duties?
He’s worked with a lot of people, like Thurston Moore, and he’s a studio guy. That’s why, when he got into the band, he brought it all together. He had the knowledge of the technology and equipment to put the electronics together in a way that I couldn’t do for sure. I’m not all that educated on all that studio trickery so he can handle all that.

Did you come from anywhere different as far as the lyrics were concerned?
Nowhere specific. I’m not one of those singers that goes around preaching or trying to get this big thing across to people, some sort of agenda. I just write what I feel and it’s usually a lot of the same subjects, even with Eyehategod – depression, isolation, society and corruption; all these things; love and hate… There’s no one subject, just an overall feeling to me.

There’s a real sense of dissatisfaction towards society on both records…
I’ve never fit into society; even before I started doing music I never did. I didn’t fit in school or anywhere. Maybe listening to punk rock and growing up as an outcast, a runaway and a homeless kid and a juvenile delinquent, all these things, were just the things that brought me closer to other people like me. It’s all reality. I can’t fit in society; I do the best I can but it’s all a big joke to me. 99% of humanity are just completely ignorant; I don’t claim to be smart at all, but some people don’t even leave their block, or the city they’re in. They don’t have any urge to learn anything of other cultures, and I kind of despise that about society. 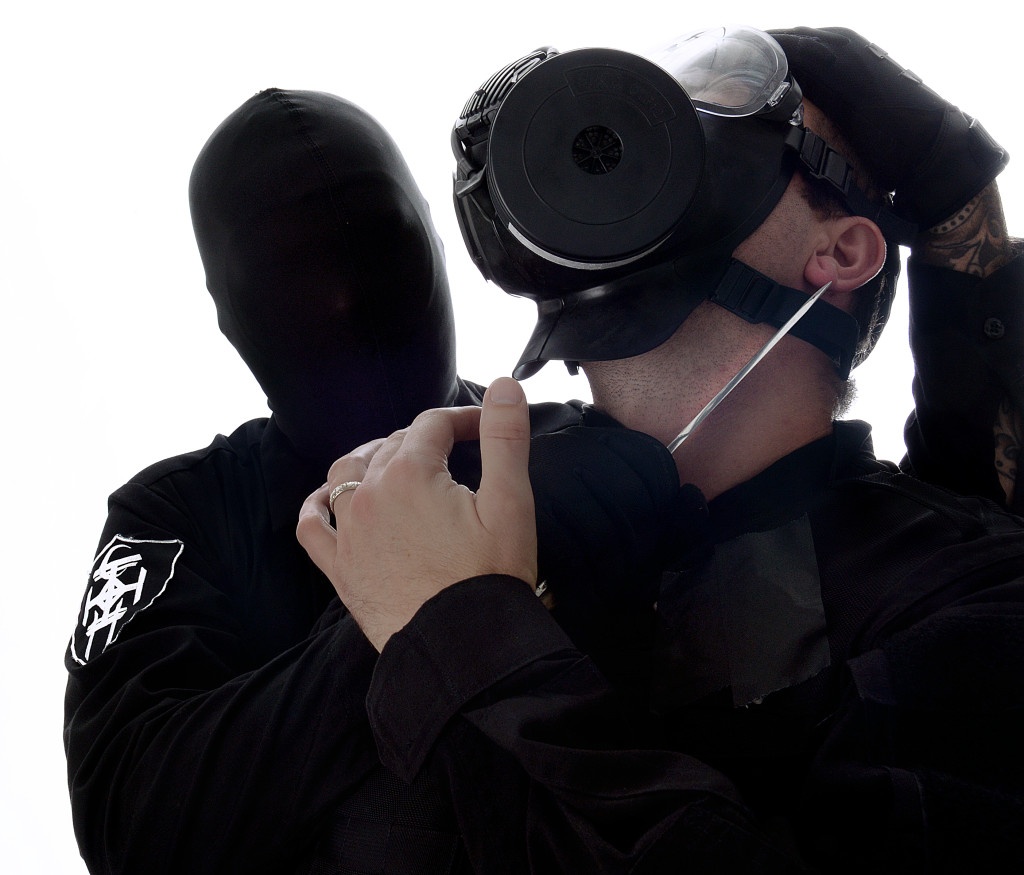 “Maybe listening to punk rock and growing up as an outcast, a runaway and a homeless kid and a juvenile delinquent, all these things, were just the things that brought me closer to other people like me.”

After having spent decades touring the world, has your perception of America changed at all?
It hasn’t really changed my perception of America, it has solidified it even more. Society gets more ignorant every day. It’s ridiculous what goes on, from school shootings and racism to shitty politicians and people with money that have power. Being in tour on America solidifies that, in my mind. You definitely meet people here and there that somewhat agree with the exact same things that you’re saying; there are a lot of intelligent people out there, but they’re few and far between.

Do you still keep a sense of hope, both yourself and in your lyrics?
I think there’s always hope. In darkness, there’s always a glimmer of light, a spark of something positive that can be formed, but I doubt I’m going to see that in my lifetime. We’re only on this earth for 90 or 100 years at the most. People have those many years to do what they have to do or do what they want to do and try to change things, or they can just sit back and work a shitty job and not do anything. I choose to do art because that’s just what I’m good at. Music is art, writing is art. I don’t think I’ll see any changes in my lifetime but hopefully one day these poor kids that are born right now, the children of the world, will have a good future, but who knows.

Where do you think things would have ended up if you didn’t have art?
I don’t ever wonder that, but people ask me it all the time. I see people ask every band that, and most of the people in extreme or heavy music say “I’d probably be a serial killer.” That’s kind of a silly answer. Of course, it could be true, but I don’t think it’s that easy to be a serial killer. I think it would be a hard thing to pull off, but I don’t know what I’d be doing. I’m from North Carolina, which is a whole other state from where I live now. Where I live now, there’s a cultured city full of music in New Orleans so if I hadn’t moved here, or any other cultured city that had music or art, I’d probably still be in the same state that I grew up in for the first ten years of my life and I’d probably be miserable, working in a factory or something. You never know.

There’s a heavier drive on this album towards the industrial side of your sound on this album, both in the electronics and in the percussion. Was there any reason for pushing in this direction?
Basically, it’s the culmination of these four people, just like in any band. It’s the environment that you live in, the peoples’ personalities, but I think we did purposely go into it to make more of a ‘rock’ album. That’s a huge umbrella but I mean more like Skinny Puppy, Throbbing Gristle – not too abstract but more focused on songs this time around.

Will you continue pushing more with this with the upcoming live shows, as opposed to the more improvisational direction in the past?
Of course. I don’t know what we’re going to do live as we haven’t talked about it yet. Everybody’s busy and taking off for the holidays, but I’m sure we’ll get in a little bit of both. It depends.

Did you feel more free in what you were creating with this second album or was it the other way around?
There’s not more freedom – Corrections House is 100% freedom. It’s 1000% freedom! We can do anything we want. We’re not tied down to any sort of genre, but me saying this is more of a rock-based album – it’s still a weird, electronic album, with a lot of weird things that people don’t get. I’ve had a lot of assholes ask me why I’m doing this band. Why don’t you do Eyehategod? It’s because I want to. I like this kind of music. I’m allowed to do whatever I want. With Corrections House, we’re allowed to do straight-up noise, we can do heavy rock, we can do slow or faster, Ministry-style stuff, acoustic… it’s all on the records, and in the live shows, especially. As far as doing stuff live, on a month-long tour we can start with one set and then every single day we might drop something, add something or change a song, change the lyrics. We’ve done that before so it’s pretty easy with this band to improvise and be free with it.

So do you feel a greater sense of freedom within Corrections House than in any of your other bands?
I have another band called The Guilt Of… and that’s similar to Corrections House, but that’s just me and one other guy. We don’t do live shows, but we have around 8 or 9 records out in various formats and that band’s even more different because it has black metal elements, if you can call it that – I just call it that because of the guitar sounds and some of the vocals. I’ve always been into bands like SPK and Throbbing Gristle, Test Department and Einstürzende Neubauten – bands that experiment and do different things.

Do you have any plans for videos to accompany any of the new material?
We were supposed to have a video done already, but some of the usual people we work with were busy or they flaked out. As of right now there is nothing but there will be.

Where did the phrase How To Carry A Whip originate?
I don’t even know, to be honest. There were lists of one-liners and titles and lyrics while we were in the studio and I think Sanford picked it for the record. I was actually wanting to call it something different, I forget what, but Sanford wanted to call it that so he did. To me, there’s not any deep meaning to it.

HOW TO CARRY A WHIP IS OUT NOW VIA NEUROT RECORDINGS