Once a band who were notorious for volume and their mountains-to-valleys approach to tone, Mogwai are today renowned for their finesse, teasing out dramatic acoustic narratives using every tool at their disposal. It has unsurprisingly led to plenty of praise for their ‘cinematic’ approach, but every so often that term has been applied a little more literally, most recently with their work on Mark Cousins’ documentary Atomic, Living In Dread And Promise, an abstract and even-handed look at the nuclear age in all its guises. We managed to check in on Stuart Braithwaite to find out the genesis of this work and his own relationship with the atom.

You just released the soundtrack for Atomic, the Storyville documentary that was released last year. How was that originally commissioned?
We got asked to do the music for the film before they’d actually gotten anyone to make it. There had been this series of archive films – Jarvis Cocker did one, King Creosote did one – and they’d been really good. We really liked the King Creosote one so we were quite excited about it, just interested in the subject matter and when we found out it was Mark (Cousins) that was making the film that was another great thing too because he’s a really talented guy. We just did it last summer.

It’s quite a distinct documentary, very abstract, but the music fits really well. Did you work in tandem with the making of the film?
We were talking to them before they’d started making the film and that was with Mark – he was talking about the plans he had and about his vision for it. We were involved right from the very start with what they were going to be doing with the film.

You’ve stated that some of the soundtrack work you’ve done has been a very smooth process while others, maybe a bit less so. Where does this one fit in?
This was pretty easy, to be honest. I think the tones of the different sections of the film were very distinct because obviously some of it’s quite optimistic and some of it’s quite heavy so it was quite obvious what kind of music would have to work with each element of the film. I think it was just quite easy and it’s a very serious film so it lent itself to our music, definitely.

What is your relationship like with the ‘nuclear age’? You probably grew up with films like Threads showing on the TV.
Definitely, we did and in the ‘80s it all seemed to be dictated by fear – fear of AIDS, fear of nuclear weapons – the fear of nuclear war was a big thing at the time. When we played in Hiroshima about 10 years ago, we went and visited the Peace Park. It was a really big occasion and it made a big impact on us, so when we were asked to do the film it definitely made sense as something that we wanted to be involved with.

Well on the flipside of that, there are the more constructive elements of the nuclear age, like nuclear power. Is that something you support?
I personally don’t because I don’t think it’s safe and there are other ways that we can generate power that are less dangerous, because I remember Chernobyl and incidents in Japan recently as well. I think that the risks are greater than the reward.

The song titles on this record tie in more strongly and literally with the subject matter than ‘typical’ Mogwai song titles. Was this merely matching the themes or was it an attempt to treat the subject matter with more respect?
I’ve actually got a friend who works at CERN that advised Mark and also spoke to us about the film and a lot of the scientific things, so he helped us out with the song titles. As you said, it’s not really the place to have anything daft when it’s such a serious subject.

With Atomic, how much work was done on the original recordings to come to the album versions?
We developed it. We didn’t start from scratch, but we did a lot of extra recording and changed a few things.

Listening to a song like “U-235”, there’s a feeling of the soundtracks of John Carpenter and the like in there. Did you make a conscious attempt to tap into those classic soundtrack tones or is it more that anyone who soundtracks in a particular style is going to be associated with one of the greats – Carpenter, Williams, etc. – at some point?
I think John carpenter is just a really big influence on music, generally. His music, his soundtracks, I almost forget that they’re soundtracks because they’re so good. They’re some of the most powerful creative music that I’ve ever heard so I definitely think that his music’s been a big influence on us generally, not just on the soundtracks that we’ve done.

One thing Carpenter excels at is creating sounds that really evoke the visuals that he’s creating. Do you remember the first soundtrack you heard that had that effect?
I think it’s probably when I was a wee guy, way back to Star Wars. I just remember hearing that music and it just being such a big part of the experience, seeing the film and the whole drama of the story, even going back to other things like Jaws… so many memories as a kid, like E.T. as well. All of that music is so intertwined with the experience of the films.

You also scored the second season of Les Revenants. Did you have the same approach for this season, working with the storyboards in advance?
Yeah, it was the same, although we actually knew the process a bit more and it was a bit easier, but it was the same way of working.

Going back to some of your stranger song titles, one that ended up being quite prophetic was “George Square Thatcher Death Party”. How did you feel when that actually happened?
Well, it sounds pretty bad when you say it out loud, but I think most Scottish people were pretty happy when Margaret Thatcher died, so I think it’s probably the only time that we’ve reflected the mood of the nation. [laughs] 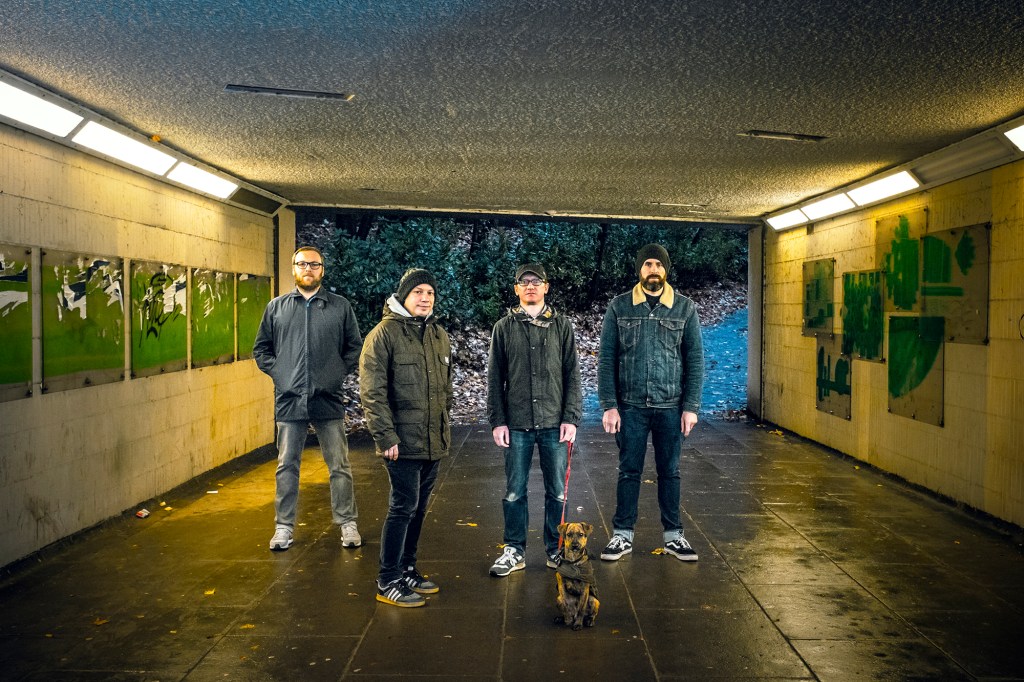 “I find that techniques change with technology, that’s probably the main thing. It’s easier to multi-track in your own house.”

Did you notice a spike in downloads of that around that time then?
I didn’t notice, but I bet there were a lot of people watching it on YouTube because they heard people talking about it. “What? A band called a song that?” Yeah, I don’t think we benefitted financially anyway.

Do you have any plans of a live screening of Atomic, like you did with the Zidane score at Broomielaw?
Yeah, we’ve got a couple announced already, one in Austria and one in Brussels and we’re going to be doing a few over the summer.

How did you feel the live Zidane showing came off, and why was there such a delay between the soundtrack being released and the live show?
I think it was just schedules, really, because it was all music that we didn’t play, we needed to have quite a long time to rehearse it. The person that wanted us to do it was part of the Manchester Festival, which is only every two years. Really, it was talked about a lot, but it took us a long time before we got to the point where we had the time to rehearse it and that was when that festival was on.

You did some really interesting interviews in the run up to ATP last year with some of the acts, like GZA and Doug McCombs. How was that experience, with you being the interviewer rather than the interviewee for once?
I totally loved it, actually. It was such a great experience and those people, some of them are our friends – I know Doug reasonably well – but just talking to Jim Reid and asking him about the early days of The Jesus And Mary Chain, that was great. I really enjoyed it.

The thing with The Jesus And Mary Chain was that they were part of this huge Glasgow scene in the late ‘80s and early ‘90s, along with The Pastels and plenty of others. Now, we have the likes of yourselves and Chvrches becoming huge, so do you think there’s been a revival in Glasgow’s musical popularity?
You know what? I think it’s been a constant ever since we started. There’s always been a lot of stuff happening, there’ve always been a lot of bands and I think it’s actually gotten even better because I think a lot of bands are moving to Glasgow to make music because the city’s got a reputation for it. It’s certainly a major music city now. Before, it would come and go, sometimes there’d be lots of things happening, other times not so much, but I think it’s a constant now. There’s always something happening.

Do you still make it out to many shows yourself? I think the last time I saw you out was at Beastmilk and In Solitude.
I try to. I probably go to a couple of gigs a week, something like that, but I should try to go to more. I do what I can. That was a great gig though, wasn’t it?

As far as writing goes, have you changed much in your approach, as the sound has certainly evolved a lot over the years?
Not really. I find that techniques change with technology, that’s probably the main thing. It’s easier to multi-track in your own house. When we first started, it was just 4-tracks and all that stuff. That had its own charm, but it’s definitely a lot easier to do more sophisticated recording on computers in your own house, definitely.

You obviously were quite a tight-knit bunch, but is it as easy to get together nowadays?
Well, Barry’s in Berlin, but we get together to rehearse for shows or to record. I think the three of us that live in Glasgow are going to try to get together a bit more this year, but it’s a bit tricky getting all of us together all of the time.

What other stuff do you have planned? Any other soundtrack work or anything that you’d like to work on, even?
Well, there’s loads I’d like to work on, but we’re actually just doing the new album now, just sharing demos and trying to get ready for that. We’re recording at the end of the year so just trying to get as prepared as we can and get as much of it done as we can.

As far as soundtracking, are there any other formats you’d like to work on? You’ve already done cinema, television and documentary, so is there anything else?
I would really like to do a regular narrative film. I think that would be really great. We’ve had opportunities, but I don’t think they were ever really right for us.