Since the return of Jesse Leach to the frontman duties in 2012, Killswitch Engage gained a new energy and consistency, and now they have released a new compelling and quite personal album, Incarnate. After the excitement of the album’s release, we caught up with guitarist Joel Stroetzel who told us how the band is at this point of their career.

Incarnate is your 7th LP and it’s another bold and furious effort. How much has the writing process changed over the years for you guys?
The biggest difference is that we don’t all live in the same area anymore and that was the case with the previous record [2013’s Disarm the Descent] as well. Everybody kind of writes songs on the road and then we put them all together and go from there. Everybody writes individually a song or a demo to get as close to finished as they can and then we kind of help each other finishing things, do the editing and things like that. When we feel we have a solid arrangement, we give it to Jesse for him to do his thing with it. That’s pretty much how it goes down. [laughs]

This is the second album released since the comeback of Jesse to the band. How different it was to work with Jesse back then and now?
I think it was really great to have him around from start to finish this time, he stood there to give his feedback on the songs and I think he just felt really inspired and more comfortable this time around. With Disarm the Descent, he had just rejoined the band and we had a lot of the songs already written. It was like “Here you go man, here’s a bunch of new songs.” This time he was around for the whole process. It was a good thing for Jesse in a comfort level.

Since your S/T debut album released in 2000, what do you think it stands out the most about Killswitch Engage’s growth as a band?
I think we got into a point where we’re a little more efficient about things. I think people know how we like to arrange songs and that’s something that sometimes we were criticized for. A lot of the songs could be predictable, we’ve always kind of liked to hear things in our arrangement like rock songs basically, so we’ve never really tried to be like a technical death metal band or anything. We love all that stuff, but I think we sort of figured out what our sound is and how we like it to sound like. We hope that translates to other people as well. [laughs]

Incarnate means “in the flesh” in Latin, so why this word to be the title of this record?
You know? That’s probably more of a question for Jesse. [laughs] He had a lot to do with coming up the artwork and the concept. I think Jesse just wanted to kind of capture the whole idea of “This is who the band is now. This is who we are.” This is the first full-time record where he really had his chance to get comfortable for this current incarnation of Killswitch.

In Incarnate, we see Jesse with an even more personal and explosive approach on his lyrics. What can you tell me about his lyrical themes and approach to this new album?
I think Jesse got a lot more personal and he actually maybe be touched by some darker issues and things like domestic violence, personal anguish, things that really trouble him. That’s one thing that I’ve always loved about his lyrics. He’s very honest, but he has a way of wearing them without necessarily know exactly what direction he’s going. You could probably interpret it in three or four different ways and I think that’s one of the cool things about his writing style. I think this record is especially very personal. 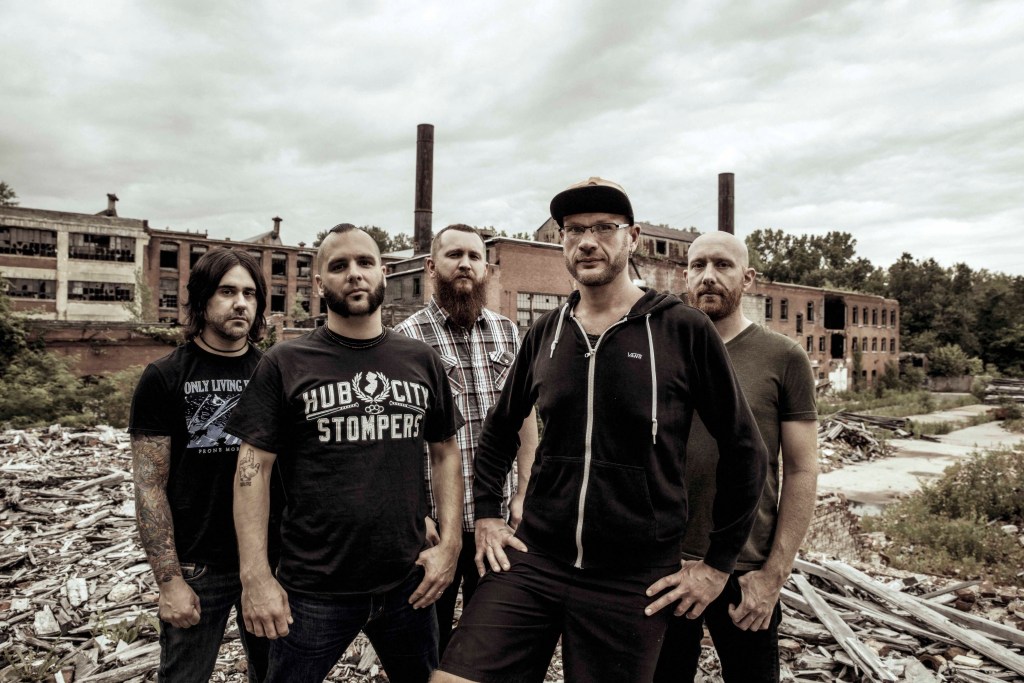 “I think we got into a point where we’re a little more eficient about things.”

One of the highlights of this record is “Embrace the Journey… Upraised” which is such a strong and brutal song. How was it like to write this one in particular?
I think that was one of our bass player Mike D’Antonio writings. We kind of piece it together from a lot of parts he wrote. It turned out really cool. As far as the musical structure, it’s kind of like an old Killswitch Engage song with the fast parts, the hardcore kind of riffs and it has that kind of insane chorus like sing-along chorus… I think this song is a good representation of a little of everything that we do.

Did you find any aspect that was challenging while working on this new album?
Everybody had so many demos and there was almost too many songs. [laughs] I think the biggest challenge was really for Jesse like “Here you go man. 18 songs for you to figure out which ones you like the most and we’ll figure out which ones to record.” I think he and Adam [Dutkiewicz, guitarist] as a producer had probably the biggest challenges, figuring out what songs are going to translate best on the record. That’s a lot of work, because there’s the four of us writing the songs and then there’s only one writing the lyrics and stuff, which is Jesse. [laughs] He really had his hands full.

The record has 12 tracks, plus 3 bonus tracks, so was it easy for you guys to pick up those songs?
That was kind of a tough decision really, because again we wrote too many songs [laughs] which is really a bad problem to have, but as time went on we got attached to different ones. That was up for discussion for a long time. Ultimately, I think we just had to put aside certain ones that you know this tracklisting seems to have the best flow, regardless maybe we’re missing a song or two that somebody wants, but it was for the good of the record, you know? In the end it all worked out really well. That was the toughest decision to come up with a good tracklisting that made sense.

Like you mentioned, Adam produced once again your album, so how’s he like on the other side of the table?
[laughs] It’s funny. He’s such a crazy man on stage, but in the studio he’s very professional and very picky about everything. He really wants to make every picture to get the perfect take on the right time to get the right song. Sometimes I think he’s being hard on us, but I see him recording himself and he holds himself to the same standard. He’s always like very particular about getting things to get clean tracks and good tones. He’s really great to work with. It’s nice having somebody who’s part of the band and gets where we want the songs to go.

You guys are now hitting on the road for live shows. What have you been listening to while on the tour bus?
I always listen to The Clash or whatever we play on the bus. I’m listening to a lot of mellow stuff like Ryan Adams, Radiohead… We do the metal all day, so usually at the end of the night we listen to other stuff. [laughs]