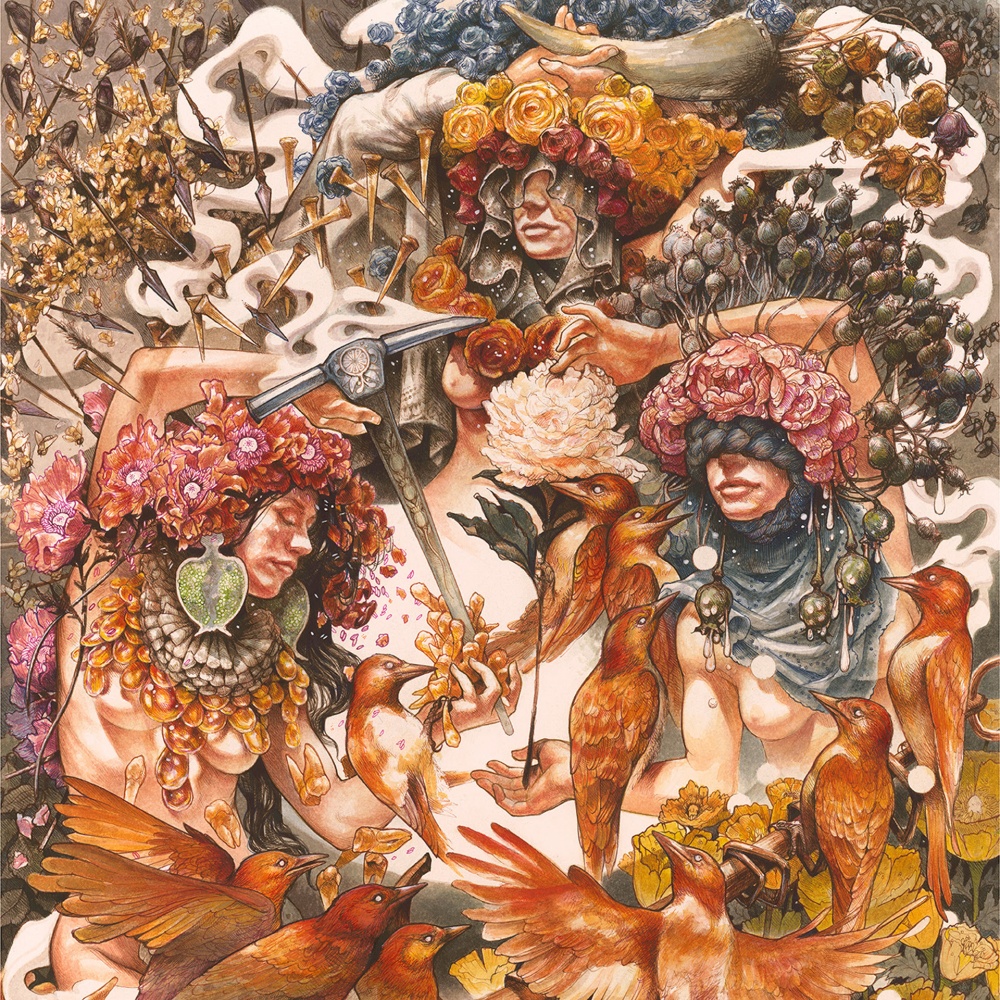 It is truly fascinating to witness the evolution of Baroness’ sound. In a decade and a half of releases, Baroness went from Sludge Metal titans along with Kylesa, Black Tusk and High on Fire, to becoming an explosive and adventurous psychedelic Progressive Rock band. Add in elements of Folk and Alternative Rock, and a notable sense of passion in the band’s performances, and you’ve got a goldmine in your hands.

My relationship with the band started when I first discovered them a few months before they announced the release of their Yellow & Green double-record. The heaviness of the first two albums intrigued me highly, but the two following records opened up the band’s sound and thrust them into uncharted territory, and with Purple I was no longer just intrigued, I was most decidedly a fan. That album’s incredible songwriting, instrumental inventiveness, poetic lyricism and fiery delivery, especially considering it came after a horrible road accident for the band, was mesmerizing. But this also means that, with the critical acclaim Purple received overall, Baroness has a lot to live up to. And while the critics’ consensus seems rather positive so far, yours truly is frankly disappointed for the most part.

Firstly, what you might have heard from other fans is, unfortunately, true: the album’s production is, at times, headache-inducing and borderline unbearable. There were shades of Dave Fridmann’s over-compression being applied to the instrumentation back on Purple, but on Gold & Grey this is intensified to the point that simple drum parts, for instance, sound distorted beyond belief. If one pays very close attention to the instrumentation, it eventually becomes apparent that the band tried to work some intriguing effects and sonic layers into the songs, but these got completely buried in the mix. Other than the production, we’ve got an overlong tracklist that needed a little trimming, especially when it comes to some rather pointless interludes: “Sevens” sounds like the band REALLY wanted to cover Tim Hecker’s “Virgins” in two minutes and change, “Blankets of Ash” adds nothing to the album, and “Crooked Mile” and “Can Oscura” present intriguing motifs that go absolutely nowhere. This collection of 17 tracks has a few tracks too many, including the underwhelming finale of “Pale Sun”, and when you have to listen to John Baizley continuing to sing in a register that makes him sound like he is rallying up troops to battle Orcs in Helm’s Deep throughout most (but fortunately not all) of the songs, it can get tiresome.

However, the album does have its moments of brilliancy. Some entire songs are absolute highlights. “Seasons”, “Throw Me an Anchor”, “I’d do Anything”, “Cold-Blooded Angels” and “Borderlines” are all songs that deserve to become staples in the band’s live setlist, and their sense of adventure remains as heightened as ever: the quasi-Trip-Hop beat in the beginning of “I’m Already Gone”, the blast-beats in “Seasons”, the beautiful intro of “Tourniquet”, the emotional balladry of “I’d do Anything” and the subtle singing in “Emmett – Radiating Light” are some examples of a band constantly trying to challenge itself and deliver something new and fresh. Gold & Grey is also full of unpredictable song progressions that have the listener guessing where things will go next, and even though Baroness’ guitar work has always been one of their strengths, it still feels imperative to point out that the guitars here sound very proggy, melodious and appropriately epic.

Gold & Grey might end up becoming a textbook example of how great ideas and fantastic songwriting can be marred by terrible production and the lack of an outsider’s pair of ears to set things straight. This is one of the band’s most well-written efforts, while being, by far, its worst sounding one. One can only hope that the band can retain this line-up of excellent musicians for more than one record in a row (Baroness has been rather unlucky in this department throughout the years), because they make some great music together, and that they decide to completely change the production style of whatever their next effort is, whether it’s “Orange”, “Brown”, “Turquoise”, “Indigo”, “Lavender” of “Fuchsia”. I don’t mind if they go through all the colors of the rainbow despite constantly saying that every new record will be the last one named after a color. What I want as a listener and as a fan is that what I am hearing reflects the kaleidoscopic intentions of the band’s songwriting and artwork. And that is not exactly the case on Gold & Grey.