Four young people from Norway that have important messages to pass on and their music is their way to bring up those concerns for everyone to be aware of. We caught up with Sløtface that shared with us their thoughts about society nowadays and much more.

First of all, why did you change your name previously known as Slutface to Sløtface? Either way, both names are awesome.
Halvard: Due to social media censorship, we had been shut out of certain opportunities as a band, so we wanted to try and sneak by these old fashioned views and kind of “trick the internet” by changing that one letter. We have in no way changed our political and feminist message, we just hope to reach more people with our lyrics and message. Also, we like the connection to our Nordic roots. It basically means the same thing over here, or anywhere really.

Tell us a little bit about yourselves and how you started this band.
Haley: We’re 4 people between 19 and 22 years old. We like to think of ourselves as pretty nice despite what most people think due to our name. Study wise, only one of us studied music in high school, the rest of us chose the more boring path of regular studies. We’re all studying this fall, and since we’re all pretty different people, it varies from Molecular Biology studies, to Economy, and Music science. We had all played in a bunch of different bands in our teens and knew each other from the various constellations, but none of them really stuck. In 2012 me and Tor-Arne then wrote a few songs we wanted to record demos for, so the four of us kind of picked the most fun people to play with, started playing together, and it worked out really well, so we kept doing it.

Musically, you blend these fierce punk tunes with pop sensibilities. What were your main references while shaping your sound?
Haley: In the beginning, we all had different inspirations, but we could all agree on the ironic cleverness of lots of brit-pop and indie rock like the Wombats, Arctic Monkeys and the Smiths, so these bands shaped a lot of our early stuff. Also, we all really like good strong pop songs like the kind our Swedish neighbours make, like Robyn and Veronica Maggio, so we wanted to combine those things to make music you can sing along to and mosh to.

Your music is fearless and straight to the point, something to praise for in the nowadays music industry, really guys. How do you usually approach your songwriting process?
Halvard: Well, every song has its own way of coming together. But usually there’s someone in the band – often Lasse (bass) or Tor-Arne (guitar) – that presents an idea or demo. Maybe then we jam on it a little while, and if everybody feels it, we start making some kind of sketch or structure, with an intro, and verses and so on. Haley writes all of the lyrics, so she might be working on those, listening in while the rest of us jam, and then we finish up a structure and Haley finalises the melody and lyrics over it.

Your new EP Sponge State is just neat and brave. All the four tracks have an important message and nothing there is by chance. Can you tell us a little bit about those songs and their particular messages?
Haley: The songs on the Sponge State EP are from two different sessions. We wanted our first proper release to be a bit of a manifesto to what things are important to us, so the songs have all pretty serious and heavy messages. The main themes are feminism and apathy. “Get My Own” and “Shave My Head” are very clear feminist songs about us wanting people to have room to take the space they deserve regardless of gender. They are supposed to be a clear voice saying that gender should never be a limitation for what you want to do. “Kill ‘Em With Kindness” and “Sponge State” are more about the apathy and passive attitude our generation has about a lot of things. “Sponge State” is about encouraging people to go out in the world and make change, not just sit around and be nostalgic about previous generations’ versions of social changes. While “Kill ‘Em With Kindness” is about our unhealthy obsession with failure and how it seems much easier for people to criticize than create. Some of our next stuff is a lot more fun and simple, but we wanted our first release to give a very clear picture of some issues we think are important. 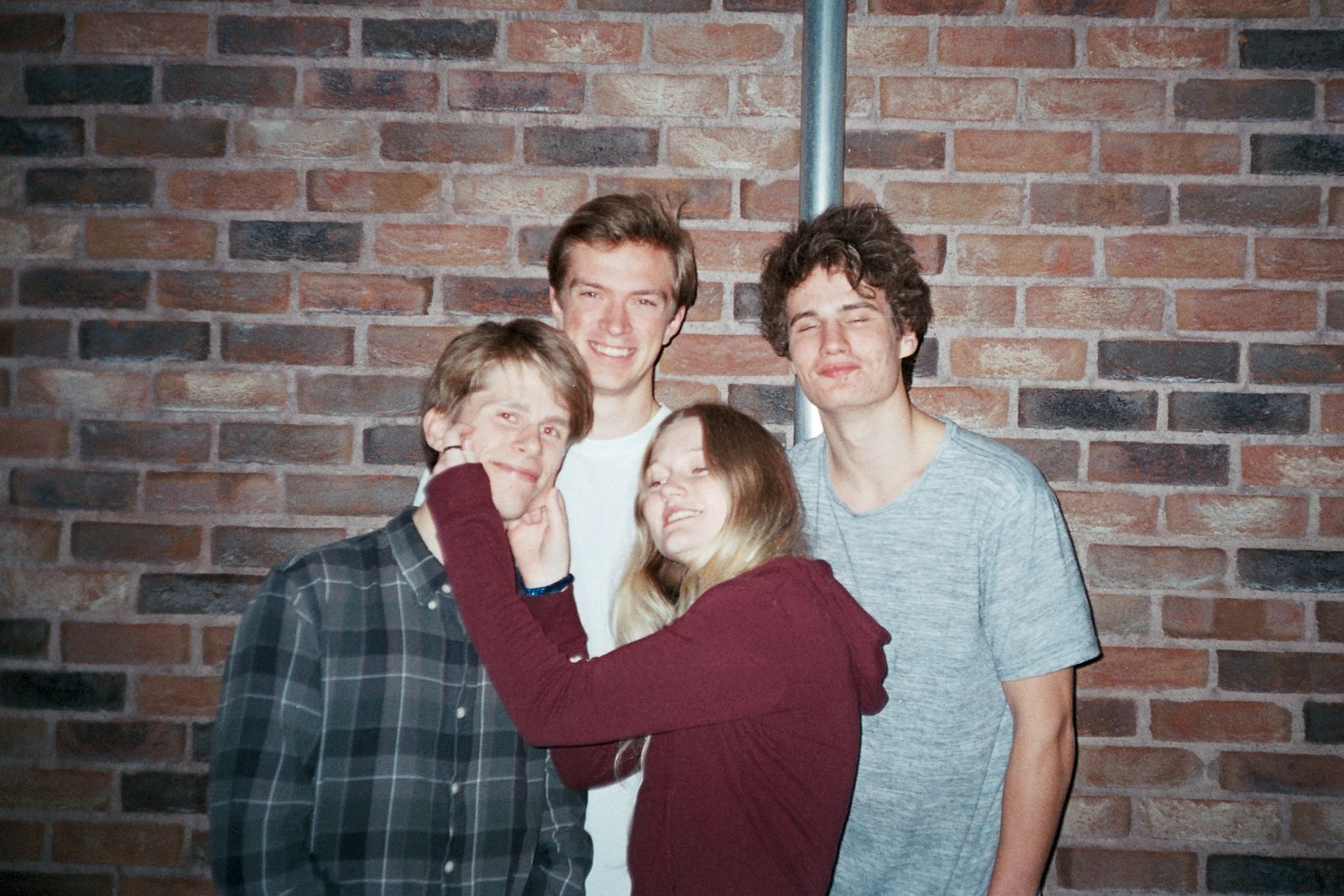 “People that want to become the change they would like to see in the world should really just become more active.”

The video for the song “Sponge State” has such an impactful statement. A friend of yours told you about Natur og Ungdom protests against Nordic Mining in Førde, which he was going to join them. Then you guys went there and played a gig for them joining their cause, which resulted in this music video. How was the experience to shoot the video?
Halvard: It was a really spontaneous project, without any planning really. The film “crew” was just us four and a friend with a camera. Luckily the protesters were really nice and helpful, which made things a lot easier. We wouldn’t have been able to pull it off in such a short time without their help. The actual shoot was freezing and we hadn’t slept for more than a couple of hours the night before, because of the long drive, but I guess it was fine. Since the protesters had been there for weeks we didn’t really feel like complaining a lot about the nasty weather. [laughs] We played the song as many times as we could before our fingers turned blue and we weren’t able to hold our instruments anymore. Our instruments also got their fair share of water and dirt during the shoot so there was a lot of cleaning up to do when we came back home, but it was definitely worth it!

Regarding that song, Haley said that “It is about the fact that making the world a better place isn’t about sharing a post or tweeting… real change comes about by doing things and being an active participant.” We couldn’t agree more with that. What do you think people need to start doing to become more active on major causes?
Tor-Arne: It seems like there’s some kind of nostalgia to the 70s. “It would be so cool to protest in the 70s and be a part of that movement” is like saying “It would be so cool to play in a band in the 90s” and then not doing it. Why not? It’s the same thing it was back then, as it is today. People are still active on major causes, protesting and caring about politics, human rights, and what’s going on around them. All of that didn’t die in the 70s. So yes, people that want to become the change they would like to see in the world should really just become more active. But we mean, if you’re not interested you’re not interested. And that’s okay as well.

With everything shitty that happens in our world/society nowadays, it’s really amazing to have bands like you guys around making a statement with your music. What drives you the most about making music?
Tor-Arne: That’s a tough one. We’ve played in bands growing up, so it’s kind of like playing soccer or doing ballet or whatever. We’ve done it since we were kids, and in our hometown it was somewhat organized by adult musicians and performers. Our friends and family are supportive, so that helps. Also, it’s important to express lyrically and emotionally what it’s like being a teenager from a female perspective in 2016. To play gigs, according to our punk and hardcore heroes from our home country is an ongoing drive when touring.

Are you currently working on new material for another EP or a possible full length? We must say that this EP was too short for our appetite, it just made us want more songs.
Halvard: [Laughs] We need to make the crowd hungry for more you know. We have an EP of 4 new singles which is already done and will be released throughout this fall. But yes, we are also working on an album. This summer we’re recording our debut album, which is all that’s on our mind right now. It will be released spring next year.