It’s probably safe to say that when Terence “Tezz” Roberts and Royston “Rainy” Wainwright formed Discharge in 1977 no one thought how impactful their music would be for the musical landscape. The English d-beat, crust, hardcore punk outfit is still going strong after almost 40 years and their brand new album, End of Days, is the irrefutable proof of it. Jeff “JJ” Janiak, the new singer of the legendary band, talked with us about their latest album and the will the band has to keep moving forward.

We’re exactly one week away from the new Discharge album being released, which so happen to be the band’s first full-length album with you on vocal duties. How do you feel about such significant and important event?
Looking forward to it. I think people are excited about it. So far the songs that have been released have been getting pretty good feedback. We’ll see how it goes, but yeah I’m definitely looking forward to the release of it. I haven’t personally even seen the album yet. [laughs] Can’t wait to see it.

It’s been far too long since we’ve had a full-length album by Discharge, eight years to be more precise. Are you aware of the reasons that made the band took that amount of time to get back to release another album?
Basically that was when Rat [Anthony Martin, former vocalist] was still singing in the band. Basically it kind of got complacent, really. Busy just doing gigs all the time. I know Rat was living far from the rest of the band so there wasn’t as many rehearsals and what not. I guess you can say it got lazy. I think they were just content playing shows and playing festivals. That’s what they did for all that time.

You join Discharge in 2014, a band which the legacy can hardly be described in mere words. How much pressure did you feel during the creation process of End of Days? And I’m also curious to know the pressure that you might have putted on yourself.
As far as writing the album I didn’t really feel a lot of pressure. We just did what we do, you know what I mean? I know the stuff we were doing live was going down really well. So as far as writing new stuff, we just really wanted to keep the album very simple, very basic, short songs, and just keep it Discharge really. Not trying to outdo ourselves. Not trying to top this album or that album. We just went in the studio and did what we do.

Correct me if I’m wrong, but you were accepted by the fans right away. I think I read somewhere that there were some fans that even ask you to continue in the band.
Yeah, it was pretty crazy. When I was asked to join the band I wasn’t really sure that I was going to do it permanently. I told them that I would just fill in for the gigs they already had booked – because after Rat had left they didn’t want to cancel the gigs – until they found someone else. Next thing you know there’s the videos that came out from the gigs that I did play and once that went public I just started getting emails from Discharge fans around the world like begging me to stay in the band just because they loved what they heard on the videos. When I started to get all these messages from all these people… Maybe I better stay. [laughs]

I know you guys basically produced the album yourselves and it was recorded in analogue. How was the process like?
It wasn’t a huge process this album. It was basically book ourselves into this like shithole practice studio for a couple of hours a day, come up with a couple of riffs, come up with a verse-chorus-verse type thing and just get one song together. By the end of each session we would have at least one song and once we got the song together it was basically quick… like get up to this tape recorder and we would record it so we don’t forget. The lyrics were added last because I don’t really write lyrics until I hear the music. When we actually went into the studio to record the album most of the lyrics were just literally written minutes before I went into record the vocals. At that point I just had maybe the name of the songs and the choruses. Most of the verses were literally written just minutes before going into the recording. We didn’t go into some big, fancy studio. It was just only a local studio. Actually, pretty miserable looking. [laughs] We didn’t have any producers or anything like that. It wasn’t really a big event for us. It was done for a couple hours a day over a period of a week. I think the longest process was the mixing. He had some issues with the bass and we ended up sending it off to Peter Tägtgren [Hypocrisy, Pain, former Bloodbath vocalist] and he ended up mixing for us in the end because it was sounding a bit like a compilation. Some of the mixing was all over the place and he kind of made it sound like an album that was recorded together sort of speak. He balanced it all out pretty good. 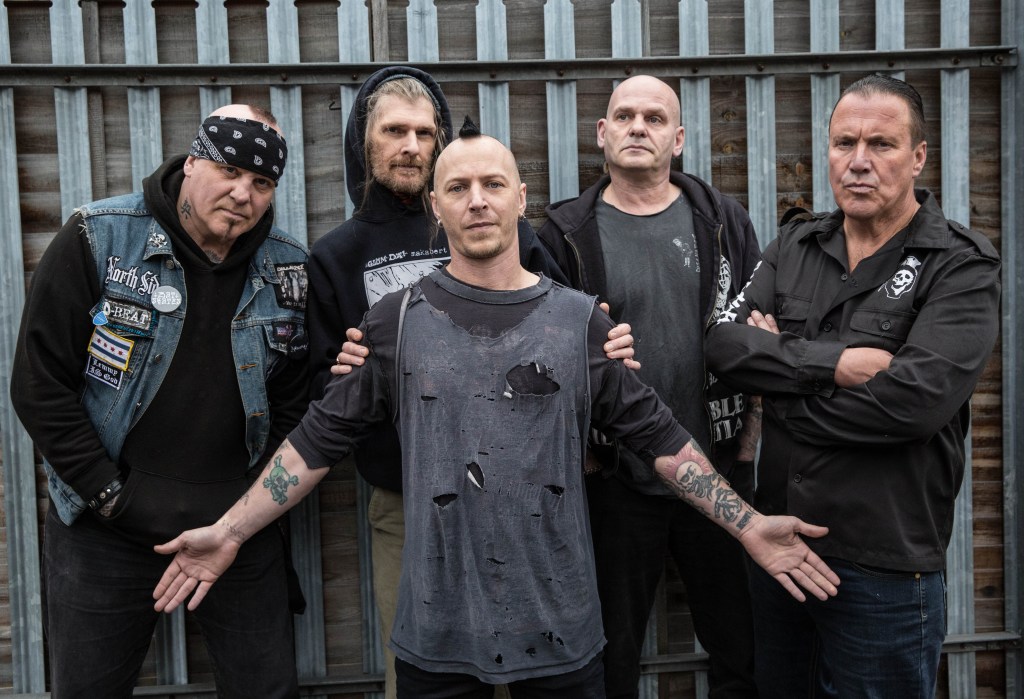 “I always liked the darkness that surrounded the band. The black and white. The general feeling of the music and what was all about. It’s something I connected with.”

You’ve said that most of the lyrics you wrote literally minutes before you to record them and you had the choruses and the song titles. It made me think… Perhaps you started working on the songs, on the lyrics, before the band started working on the album. Like, by yourself, in your head. Was that the case?
Yeah, definitely. I had some ideas. There are some things that I thought I would sing about it was just a matter of which songs will it fit. It’s just a reflection of what’s going on, really.

As with most things in the creative areas you can find different interpretations to the same thing. What’s behind the title End of Days and what did you want to specifically convey with it?
It’s just like a prophecy, what can happen. The all reason for that title was because the day we went into the studio there was this blood moon… Everyone was talking about how the blood moon is a sign of the end of the world, the end of days. We were hearing it on the radio, on the TV, which we don’t really believe in, but it was just an appropriate title giving the lyrical content of Discharge. As far as lyrics with that song is what can happen.

The unrestrained capitalism, greed, and criminal behavior by the powers that be are often subject of your lyrics throughout the entire album. If we’re not already at a critical point we’re at least very, very close to reach it. It’s unfair me to ask but… do you see or do you believe to be a light at the end of this smelly, nasty, grotesque and unbearable tunnel?
Not anytime soon, no. I would like to think that, but ever since the band started it just seems that things get worse. [laughs] I don’t really think things have improved much since the beginning of Discharge.

There’s a line on “Hatebomb” that probably represents well the work Discharge have produced throughout the years, “Don’t want to be part of your system, represents everything I’m not.” Do you feel that to be the one of the roots of our problems, the fact that many people kind of keep accepting and cope with the situations they’re put in? That kind of weird survivor instinct that’s in us.
Yeah, that’s it. People are afraid to speak out about things and people just kind of fall in line and do as they’re told. It makes it easier for them. And I suppose it’s easier that way. Being outspoken about things or even being a non-conformist can be hard sometimes.

This time around Discharge recorded an album as a five-piece. How that ended up happening and what did that, in your opinion, bring to the Discharge table sort of speak?
Tezz [Terence Roberts] was the original drummer and he came back in the band but he didn’t want to play the drums anymore. He hasn’t really played the drums in a long time. He’s a good guitarist and he ended up being on the second guitar. As far as the improvements that has brought… live it just sounds way better. Just fills everything out, closing all the gaps. Tezz and Bones [Anthony Roberts], they kind of balance off. Where Bones lacks Tezz kind of fills in, and what Tezz lacks Bones kind of makes up for. It’s a good balance really.

Not often I have the chance to interview a band member that was first a fan of said band. What specifically about Discharge music and message did attract and excite you as a listener?
As a fan it was the general sound of the band, you know what I mean? The general dark sound and the vocals. The vocals were the type I was in to when I was younger and I used to like bands like Negative Approach and stuff like that that had a kind of hard type of vocals. I always liked the darkness that surrounded the band. The black and white. The general feeling of the music and what was all about. It’s something I connected with.

It’s funny. There’s all that darkness surrounding the band, but there’s also a tone of light and love too.
There is. We love all our fans and we’re friends with all our fans. There’s a big family atmosphere that surrounds the band and we get a lot of dedicated followers that come to almost all our gigs no matter where we play. We just sing about the darker part of society.

Next year the band will be celebrating 40 years since it was created in 1977. Do you know how Tez, Rainy, and the rest of the band feel about such landmark?
Yeah… [pause] I was talking with Bones yesterday and he was just saying that he would never have thought that he would be doing it for this long. The thing is, he loves to play and he said that if he didn’t love it so much he wouldn’t be doing it now. As far as celebrating 40 years… yeah, it’s a great achievement to be a band for that long, but I think the band also tries to not stick on the nostalgia aspect too much. It’s nice, but the important is to keep moving forward and not focus too much on the past.