Gatecreeper have arguably put out the most impressive death metal release of the year—and it’s their first LP. Sonoran Depravation’s hellacious 31 minutes are familiarly old-school, but every element is perfect. If you pine for the days when Obituary were young, here’s their desert reincarnation. I sat down with vocalist Chase Mason before one of their show in Pensacola, FL to talk about the tour, the new album and fortuitously signing to Relapse Records.

What do you think you guys are doing differently than anybody else?
I think that we’re recording, or we’re writing, songs that are memorable. I think that’s something that gets lost a little bit in metal, so we’re trying to make songs that get stuck in your head.

They do, by the way. This is one of my favorite albums of the year. I just started writing reviews, so I’ve listened to a lot this year and I was like, that is SO good. Okay, so this tour right now. This is one of your few off dates, even though you’re still playing a show you booked on your own. How is it going so far? I know it’s only been a few days, but…
It’s going great. Everybody’s great on stage and off. We get along with everybody. We’ve toured before but this is our first package tour with a bunch of bands and I think it’s a great experience and I can’t think of a better tour to start off our first experience like this.

You have one off date in 22 days, so how do you keep that going?
I don’t know, I mean none of the other bands booked anything on their off dates. They’re just like, we need time to rest. But we figure if we’re already out we might as well make the best of it. I guess how I prepare or manage it, like today we’re all staying at the same hotel—all the bands—even though we’re the only band playing here. Everybody else was hanging out, partying or whatever, and I just went back to the hotel and slept for a little while. I mean, because I don’t drink, but I still would like to hang out with everybody and have a good time but I was like, well this is my only chance to kind of rest. So I think it’s about doing that and taking advantage of the time you have to be alone so you don’t go insane.

That’s always nice. So, your album comes out in 4 days. How would you describe it as a whole?
I’m not sure. I think it’s a unit of an album, you know? Since it’s our first album we spent two years writing it. Some of the songs on it were some of our first songs after the EP and then some of the songs we wrote before we went into the studio, so it’s a good span of time that went into the record. But I think it all came together. From even two years ago after we did the EP, we did a couple splits but we still always knew, alright, we’re gonna do a full length. So we kind of had that in mind. But I think that it’s well-rounded. I think that all the songs are cool. Everybody that has heard it, whether it’s our friends or people in the band or people in other bands, they all have a different song that they think is their favorite which I think is good. If everybody was like, oh this is the good song…

Yeah, I was reading another interview and some guy was talking about one song and I was like, no it’s not that one! That’s kind of cool.
Yeah, it’s cool when someone is like, Alright, I like this song. And then someone else is like, Aw this is my favorite song of the album. Like, That’s my least favorite. That’s a good sign I think. 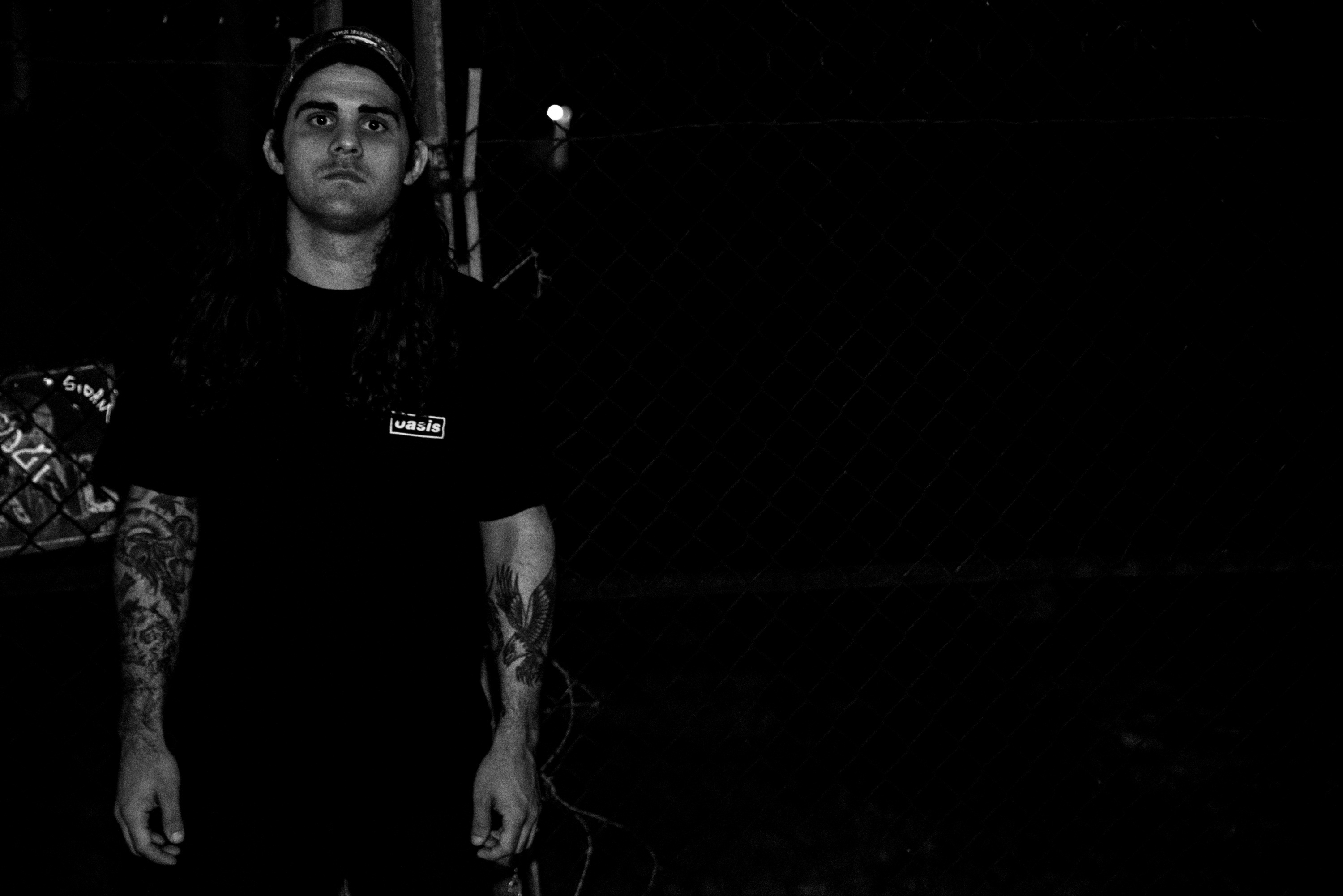 “We take a lot of influence from bands from Europe, from Sweden especially, from Florida death metal bands. We kind of take all of that.”

A lot of bands tend to sound like where they’re from, like you can identify them by their sound. So other than the title of the album, does Arizona inspire you lyrically or anything like that?
I don’t think so. We definitely did, you’re right, in the title to kind of represent Arizona. We take a lot of influence from bands from Europe, from Sweden especially, from Florida death metal bands. We kind of take all of that. I mean Arizona doesn’t really have a whole lot of interesting characteristics that would be “Arizona culture.” It’s Southern, but it’s the Southwest, so there’s kind of a mix. I think there’s a little bit of a Southern feel to it. I guess some cowboy shit mixed in there [laughs].

Is there one song specifically you feel like you spent more time on than any others? Whether writing or recording it?
Well the song “Stronghold,” that’s the oldest song on there. So that’s the song we spent the most time playing before we recorded it because we played that at our first-ever show. I’m trying to think… The way that we write our songs, me and Eric, our guitar player, we get together and write the song or he’ll write a song or I’ll write a song. When we play live I just sing, but I play guitar and help write a lot of the stuff. We get together and whether it’s I write something and I show it to him and put it together or he writes something and we put it together. “Rotting As One” is one of the songs that we had kicking around for a while and it took a while to finish. And the way that we try to make things short and it doesn’t get boring. Kind of trim the fat. I think that it took us a long time to finish it because we couldn’t figure out how to end it. We tried a bunch of different endings and then we were just like, let’s just end it. If we’re struggling to find some interesting way to end it then we don’t want it to be forced so we’re just like, alright, let’s just do something simple and there we go, that’s it.

The splits. You’ve done those this year and you have the album. Are you doing anything else this year other than touring?
[Laughs] No, no we’re not. The splits came out this year and we’re doing this tour and when we get back we’re playing a fest. Technically part of the tour. Planned a couple of local shows. We’re just gonna take it easy. We’ve already got some things that we’re planning to do next year, so… At this point we still all have normal jobs so we’re not at a point where we can quit our jobs and take off forever. We may never be like that, but I know we’re not there yet. So when we get back we’re going to just chill and do what we were doing until next year. And then we got more cool stuff coming out.

I read you didn’t originally do the album for Relapse, but it got passed along and picked up. So, you already had it done right? How did that work?
Sometime last summer Dom [Romeo] who does the label A389 emailed us because I’m good friends with the guys from Full of Hell and he put out their record, and some other friends’ records, and he kept asking them about us. Like, Oh, you know those guys from Gatecreeper, could they play with them? And they’d post about each other and stuff. Dylan [Walker], their [Full of Hell] singer, would be like, Yeah, here’s Chase’s information just talk to him. He kept asking but then he’d never hit us up. Eventually he did and we were actually going out to do an East Coast tour so he came to our show in Baltimore and was like, I want to do your full length. And, like I said, we were planning on doing that next so we were like, yeah cool. A couple of days after that is when the Young and in the Way split came about because he put that out. Later on in that tour we went and hung out with the guys from Young and in the Way, and he had worked with them in the past so he said, you guys should do a split together. Alright, so we did that and it was really cool. We went to do our full length and, you know, it’s a small label that he runs by himself. Pretty DIY thing. So we went into it and we had to do all the recording. We get everything done and then we sent it to him and we knew he was already winding things down, but he was honest about it and was like, this is really good but I don’t really have the time to do it, but I’m going to send it to Relapse. He’s had bands like NOISEM and Seven Sisters of Sleep and ILSA, a bunch of bands that have gone from A389 to Relapse. He sent it to them and I didn’t know what to expect. It’s like, sure. They sent it to them and, on the same tour that I was just talking about, some people from Relapse came to our show. They didn’t say anything, they were, like, undercover. When they heard our record and they had already seen us live they wanted to sign us. So we lucked out. Got a couple more records coming from Relapse [laughs].

Y’all aren’t that well-known yet, but are there any groups that haven’t gotten a lot of attention yet that you think should be getting more?
Outer Heaven—they were a part of that four-way split that we did. They’re really good. Necrot is a good band. Vastum. Fuming Mouth—those are our friends who we did our first tour with. Spinebreaker.

Gatecreeper are currently travelling across the US on the Curse of the Dead tour with Skeletonwitch, Oathbreaker and Iron Reagan. Their album Sonoran Depravation is out on Relapse Records today.

Words and pictures by Teddie Taylor.