In the scary times that we live in as a society, there are still artists that standout for their bravery and integrity. Artists like Alynda Segarra – the woman behind Hurray for the Riff Raff – create art that speaks for all of us. The Navigator is her brand new album and it couldn’t be more suitable to what we see and feel nowadays. Alynda shared with us her thoughts about the current situation in the USA and across the globe, and what really inspired her for this new effort.

How’s 2017 starting for you so far?
The year has been crazy… It’s very crazy here for many reasons but I’m very excited about the record and I’m very excited to tour behind it. Just excited for it to come out too.

Before we talk about your new album, I want to mention “Be My Baby” cover you did as part of an Amazon Music Originals playlist series for Valentines Day. I’ve always loved that song and I simply love the way you play and sing it. What’s so special about that song for you to cover it?
It reminds me of my childhood because my family grew up in that era and I grew up listening to the music of that time period. I’ve always felt very inspired by that, essentially by the singing from that time period. It was so pure in a way and very soulful. Also I just love girls groups and the fashion of that time period. It’s such a beautiful song. Everyone all over the world loves that song.

The Navigator is your new effort in 3 years and it’s just so accurate to our current reality. The whole vibe and themes you approach are so raw and sharp. What can you tell me about the meaning behind The Navigator?
I was very inspired by Ziggy Stardust by David Bowie.I really wanted to write this album with a story behind it. It wasn’t a musical but yet it was a story that went along with the songs. It can give the listener just some fun journey to go on that you can listen to the album and be like “There’s a story behind it.” There’s a character, there are locations. It was very fun for me to dream up this story, but also because I really wanted to have a message that would be inspiring and empowering to people. I wanted to create a heroin! I kind of wanted to make this superhero that was just a regular girl from the city who’s a teenager and who feels like she needs to escape and she needs to run away. She feels like she needs to escape from where she comes from. The story is that she goes to a wise woman and says “I want to wake up tomorrow and not recognize anything around me.” And so the woman puts her to sleep for 40 years and she wakes up and she still is in the same city, but all of her people are gone. All of her people have been pushed away outside of the city and she needs to find them and she needs to bring with her the memories of the past. She needs to remind them what they contributed to society. I think that’s a very important concept to put out right now. This idea of contribution from women, people of color are very often erased and it keeps us from being proud and to make us feel like we’ve never done anything, and that’s important. The role of “The Navigator” – the character – is that she brings with her this idea of can’t know where you’re going, and so she’s coming and she’s bringing all these memories to her people. I think that’s a very important process right now and it made me go on my own journey of trying to think of “Why was I so ashamed of who I was when I was a little girl? Why did I feel like I had to run away from everything I knew?” A lot of it was me healing those wounds and researching about Puerto Rico history, culture and all the contributions that we made. It was really an amazing experience for me.

Your music speaks up for a lot of subjects and issues that everyone can relate to, and you always speak your mind, no matter what. How do you see and feel about the world and our society right now?
I’m definitely very afraid… I’ve been very scared, but I also feel like when you’re scared is when you can be brave and it’s when you have to really stay strong and remember what you stand for. I think it’s very sad that right now to stand for equality, justice and love is radical. I think it should be normal to stand for those things. I’ve just been trying to stay strong in what I believe in and to continue doing my work, even though I’m worried about what is happening to my country and I’m very much worried about the idea that it gives to the rest of the world, you know? I really want to be an American who is outspoken to say “We do not agree with this and we’re doing everything we can to believe in justice and freedom for all and believe in peace and good relations with the rest of the world.” It’s definitely a very trying time and I think that we really need to stick together. I think there needs to be an international effort to stick together. I think my generation all over the world believes in the same ideal and I think that’s really beautiful. With that energy, we can really change the course of history.

In one way or another, all songs that comprise The Navigator feel like a call or push for people to keep fighting for what’s right and moving forward despite all. “Rican Beach” was the first song you wrote for your new album and I just love this line you sing “Now all the politicians / They just squawk their mouths / They say ‘We’ll build a wall to keep them out’”. What did you have in mind while writing this song?
Obviously, it was coming from the campaign that was happening at the time for the now current president. But I really wanted to put out this idea that says “Why now the world is them and is us?” and very soon once you allow that is became you, you know? This idea of it’s far away from you now, but soon if you allow it, you’ll be the person who to walk off and where does it end when you’re using a whole group and a whole country of people, especially as being a Puerto Rican person I feel very personally affected when you’re going against what my administration is going against Mexican people… I think Mexican culture is so beautiful and I think Mexican people in the United States have kept the country going for a very long time. I really wanted to personalize that and to remind people how it can be you next. 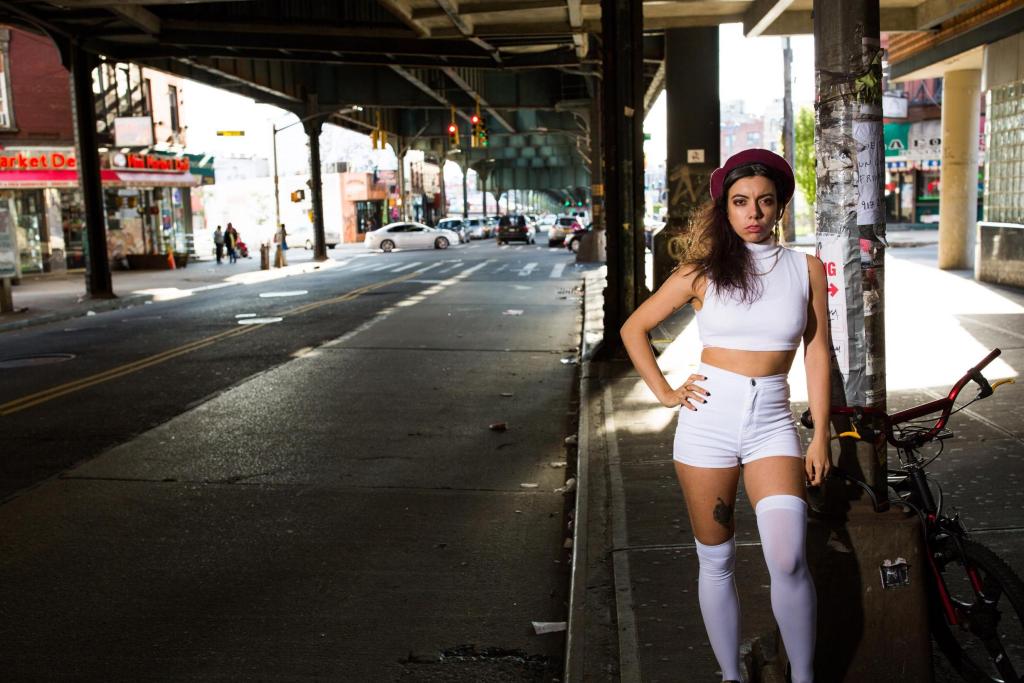 “There’s a lot of pressure for us to become really depressing and hopeless, and I think when we come together we’re joyous and it really gives us strength.”

The title-track is so powerful and it has these amazing Latin rhythms. Tell me more about the story behind this song.
This character Navita Milagros Negrón is just like your average teenager girl. She’s rebellious and she is wandering around, going to parties and being like a bad girl, and that’s what a lot of the first part of the album is about, which is about her going out with her friends, living in the city… You don’t have the feeling that she’s very angsty, like myself at that age. She just wants to escape. Nothing is going to change that girl going into the navigator. It’s kind of a musical journey of her going into this change; the transformation where she asks a wise woman “I want to wake up tomorrow and I don’t want to recognize anyone or anything around me. I want to get out of here.” And so she goes to sleep for so long. “The Navigator” is this song about what’s going through her mind as she is asleep. It’s kind of a song of ancestors of her people are singing to her while she’s under this spell. They’re saying like “You have been chosen to lead this people. You have been chosen to go to the future and ask these questions like ‘Where all my people are gonna go? Where are you gonna send them? What’s the plan here?’” to brain with her all the memories of what they have accomplished. That’s what that song really represents in the story, which is this major shift and the transformation, like the metamorphosis of her. From the average teenager girl to suddenly becoming kind of a superhero.

You have recently released the video for the song “Hungry Ghost” and it was filmed in New Orleans and pays tribute to safe venues and parties offering sanctuary for the LGBTQ community. How did you come up with the concept for the video and how was it like to shoot that video?
It was really fun. We filmed that in New Orleans. I have so many amazing experiences growing up going to parties and DIY shows, underground where it was very intentional this idea of “We’re gonna make that happen where women are safe, queer people are safe, people of color are safe…” This idea of coming together with the intention of dancing and celebrating life and being very united. I had a lot of revelations in those bases. I had times where I felt like “I can dance and no creepy guy is going to grab me” and that’s a liberating feeling, you know? To feel safe like that. But sadly, these places are under attack right now and I wanted to get together with some beautiful people from New Orleans to make the video celebrating our lives together and celebrating us when we are safe and to enjoy life, and that’s very important right now. There’s a lot of pressure for us to become really depressing and hopeless, and I think when we come together we’re joyous and it really gives us strength.

The Navigator was produced by Paul Butler (Michael Kiwanuka, St. Paul and The Broken Bones, Devendra Banhart) and recorded at Electric Lady Studios in NYC and Panoramic House in California. How was the whole recording experience for The Navigator?
It was very challenging in a good way. I feel like it changed me forever. Paul was very good at pushing me because I was doing things before that I felt that were safe. It made me really force myself to believe in myself and to think that I could sing better and to think that I could open up, because in the past I was protecting myself and I was very closed and Paul really pushed me to open myself and to put out a lot of the emotions and a lot of anger that I had been building and to turn it into power and into energy that was positive. He was like my Yoda. [laughs]

Despite everything that’s going on right in our world, what are you looking forward the most for 2017?
Talking to you is an example of I want to become more of a global band. I really want to tour the world, I would love to meet people from places that are very different from me and learn from them. I really hope we could do that and I just want to connect with people from all over the world who believe in the same things we believe in and just try to create something positive.