Grief is a motherfucker. Despite the fact that it’ll touch upon you sooner or later (unless you are unfortunate enough to die before everyone else) no one seems to do justice to this awful feeling in words. We barely know what to tell each other when someone close’s heart ceases to beat, so we try to show compassion in presence, a smile, a warm embrace, a “how are you feeling?”. But there’s only so much the outside world can do for a mourning soul. Reactions from the grieving range from melancholy to confusion and even anger: the kind that tries to seep some volatile life affirmation inside by putting the blame on something or someone other than the laws of life itself. But sometimes, when it’s not natural death but the cruelty of humanity that takes a life, that rage can turn into an unquenchable thirst for justice.

And this is how we find Mildred Hayes. After losing her daughter to a never-ending rape and murder case that the police seems to have put behind their back to absolutely no satisfying conclusion, Mildred rents three decaying billboards and uses them to call out the police for their incompetence, which in turn drives her entire community to extreme reactions. In the process there is very dark humor, sarcasm, determination, rage, fights, sorrow, growth and more. 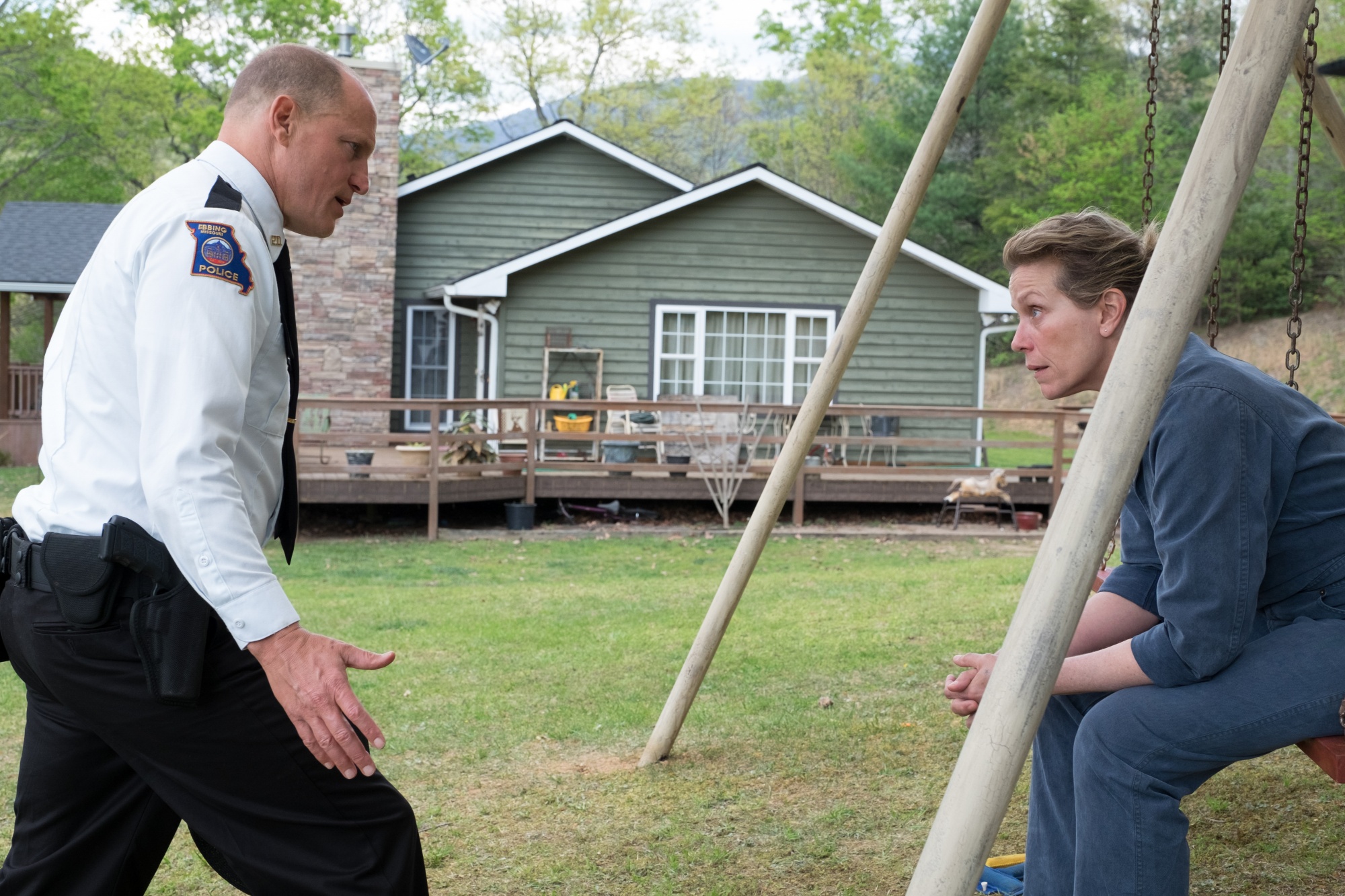 Frances Mcdormand ought to get an academy award for her work here. She carries the film with a portrayal so sympathetic and relatable that, even if you don’t fully condone her actions, at least we can easily understand where she is coming from. It’s as if the lady from J. Howard Miller’s “We Can Do It!” poster was thrown into the 21st century, and Mildred possesses a drive and zero-bullshit attitude that is absolutely inspiring. Woody Harrelson delivers a blissfully lightweight performance, very different from some of those tough moments we had gotten used to seeing from him. His character goes into unexpected territory at times and acts as an agent of change throughout the film’s plot. Sam Rockwell remains as solid (yup, pun completely intended) as ever, with one of the most subtle and transformative performances of his career thus far.

Yet as impressive as these performances are (and they really are), this film’s heart relies on its script, which never ceases to surprise viewers through its twists and turns without ever losing its mood or thematic consistency. There are far too many layers to Three Billboards Outside Ebbing, Missouri to faithfully expose here without compromising the experience of stepping into this like plunging into the unknown, but by doing so you are risking leaving the theatre a different person. A better, more understanding one, most probably. 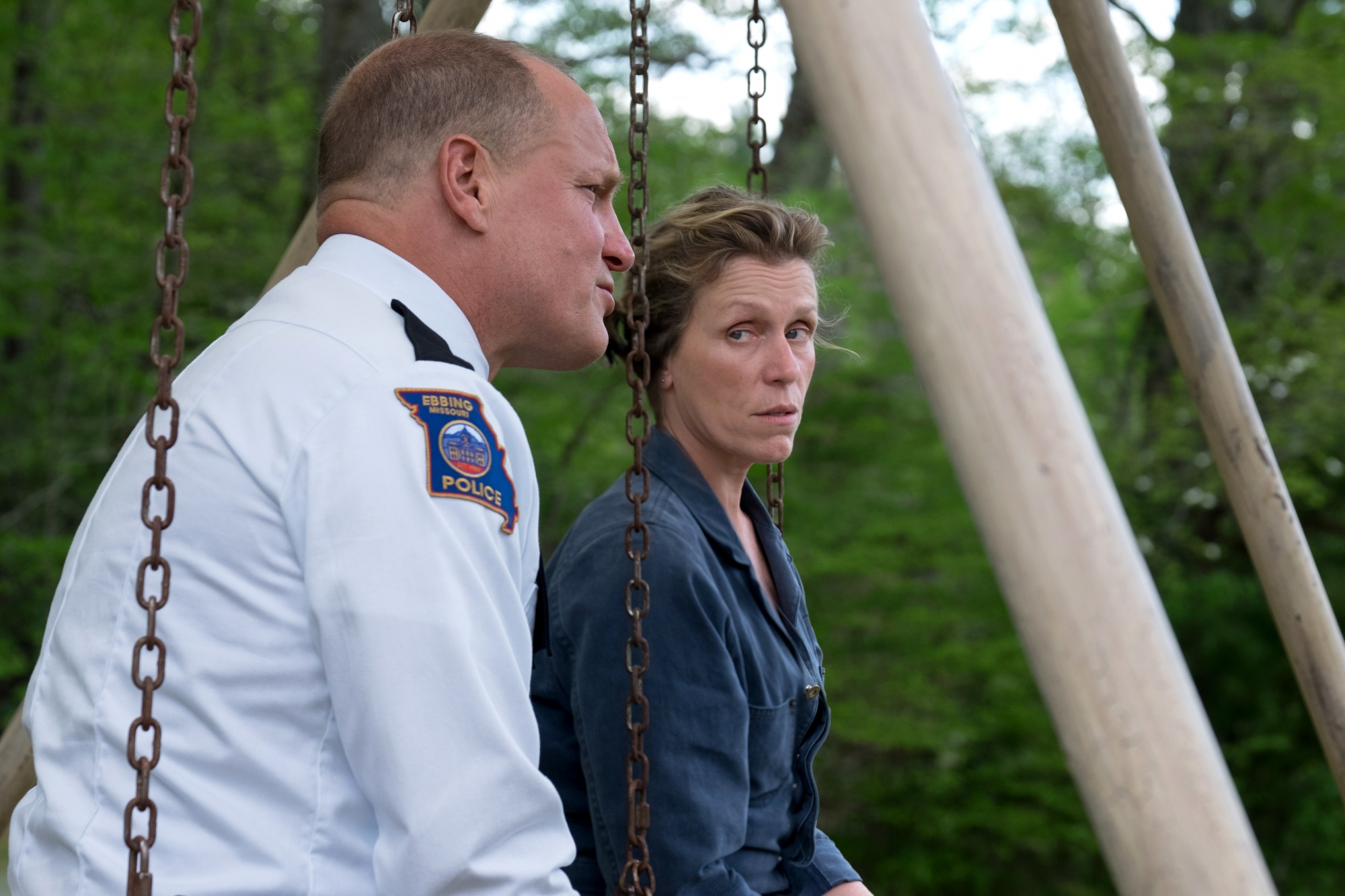 Three Billboards Outside Ebbing, Missouri has what the greatest of cinema is made of: a fantastically written script, great characters, passionate performances, and a very humanistic perspective on themes that bind us all equally, no matter what our differences may be. In a time in history when we are all busy taking sides and trying to be the voice of reason against the evils of society (even if we are on opposite sides from many others), a film that understands we should stand all (ALL!) together as much as possible is truly a blessing.