The Regrettes are another proof that age doesn’t mean absolutely nothing when it comes to be achieve greater things. The band’s frontwoman Lydia Night is a young girl with a kind heart and fierce mind, as well her bandsmates, and that’s what you will get when listening to their music. We talked with Lydia about The Regrettes debut album everything involving her and her band.

You all met at a music program called “School Of Rock”. Tell me more about that and how you met.
Genessa, Sage and Maxx have been going to “School Of Rock” for six years or something before I even got there and then I met all of them and we were friends when we were there for like a year, then we all left the “School Of Rock”. Two or three years later we all weirdly played a show together because the three of them were in a band together and I was in my own two-piece band and so we played all together. We started talking again and hanging out together, and then right after that show me and my drummer broke up our band. After that I needed a band and they were perfect for it. It just made the most sense.

On that program you performed a Sleigh Bells’ song. Which one it was and how much did Sleigh Bells shaped you as a musician?
It was “Infinity Guitars”. [laughs] They were one of my favorite bands for sure in middle school and they’re still one of my favorite bands. Alexis Krauss is just a badass and I’m just so excited to finally see them live because I wanted to see them live for so long and now I get to see them every night on tour is going to be amazing and I can’t wait.

Yeah that’s right, you will be on tour with Sleigh Bells, which is super awesome.
All the shows are gonna be the biggest shows and the biggest audiences that we have ever gone to play and that’s so much fun. Every audience kind of have upsides and downs and playing for audiences like these is so fun because you get to see also so much energy. It’s gonna be amazing and I’m so excited. I’ve never been to Seattle and I’m excited about it.

What other bands did inspire you as well?
I’m a huge 50s and 60s girl. I love everything about it, except the sexism, homophobia… But music wise, I feel like it was such a real time for music that it is so timeless. I would say Buddy Holly, Patsy Cline, Sam Cooke, and more 60s I would say The Ronettes, The Crystals, The Supremes and I could go on… But then also, I’m super inspired by the 90s Riot Grrrl movement like Bikini Kill, Hole, L7… There are so many bands and there’s so much good music out there that is hard to pick. Those are some of the bands that inspired me becoming a musician.

You are really young and you already have such an amazing presence and attitude towards to what you want to do with your music. Can you tell me a little bit about your background and what led you to music?
When I was like 5 years old, my dad took me to a The Donnas concert and seeing those girls on stage being so badass I was so inspired and I was like, “Damn, that’s what I need to be doing.” For my sixth birthday I got my first guitar and started taking lessons the very next day and haven’t stopped taking guitar lessons. My guitar teacher is really big on songwriting and teaching me through songwriting about the guitar. She’s also a singer and so I learned how to sing and write songs and everything through her. I started my first band with some friends when I was 7 years old and I wrote all the music and every song was like a minute long. It was cool because I learned a lot and I was very much of a leader. I pretty much told everyone what to do in that scenario because we were all so young and nobody knew what they were doing. I was part of that for four years and then after that I met the other girl who I have started a two-piece band and lasted for three years.

How do you usually approach your songwriting process and what does inspire you generally for your lyrics?
I use songs as my form of a diary because I’m much rather put it into music than just sitting and writing it because it’s part of my healing process for different things and actually making into a song and then performing it or recording it. Just turning it into something big can help others heal is how I get through things and how I become stronger. I think it helps writing music. My writing process is constantly changing, like sometimes I’ll start by having a lyric or a melody, or I’ll just sit down and figure something out with my guitar like writing chords. 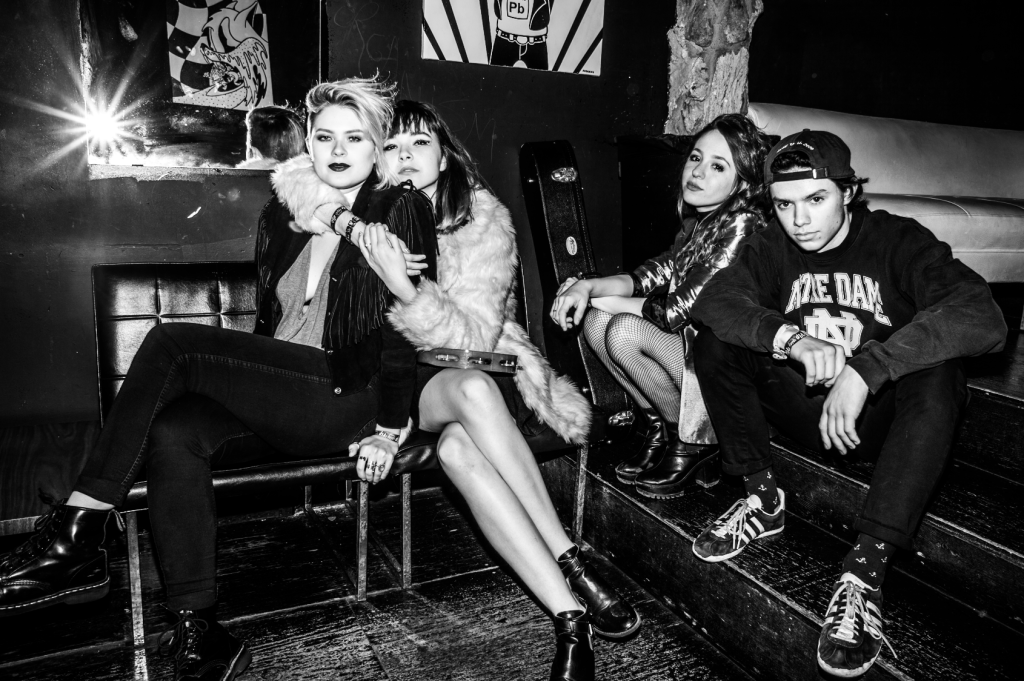 “All my songs have their own meaning to me and to others, but I’m not scared to be straight up to people.”

The first song you released with The Regrettes was “A Living Human Girl”, which is such an awesome song! What’s the story behind it?
Just high school and high school girls. The song was written when I was a freshman in high school and I had no idea how insecure everyone was and I was starting to get so insecure. It’s about people who are insecure that put you down to make themselves feel better for a tiny bit and then it starts to get to you and it makes you more insecure. I also have so many friends with eating disorders and who really hate themselves and I was like “Oh my god, this is so depressing and horrible!” I didn’t know how to get out of that, it was just like a horrible cycle that was happening and I wrote that song because it was just something that I needed to say and I needed to hear. It was out of point when I was so insecure and I wrote that from a stronger person point of view that I wasn’t yet, but it helped become that stronger person and now I can sing that song and actually believe in those things.

I really love the honesty and transparency you convey with your music, and you don’t give a damn if people will judge you about what you sing. Do you ever feel any kind of pressure when it comes to write such open and honest songs or is it just become natural for you?
I think it is just natural… I mean, all my songs have their own meaning to me and to others, but I’m not scared to be straight up to people.

You released a video for the song “Hey Now”. What can you tell me about the concept behind it and its connection to the song?
I’ve always wanted to make a video that was like an old 50s or 60s talk show. That time was just a fun period and everything, but also there was so much hate, so much violence and so many things going on back then that I didn’t want to brush over and act like it was irrelevant and that still go on until today but just in different forms. I feel like it would have been way worse if we made the video and then didn’t touch on any of the stuff that was going on back then and make it seem like that time period was all pretty and fluffy because it wasn’t in a lot of ways. Nowadays there’s still so much hate in the world that isn’t gone and we have to deal with that and try to find solutions for it. I think that’s why we wanted to touch on that stuff.

You’re going to release your debut full-length in 2017. How was the creative and recording process for it?
It was amazing. It was pretty much like summer camp with your best friends. It was a five-week process and one of the weeks was just rehearsing in the studio and also pre-production stuff. The next four weeks was all live-tracking, we did the entire album to tape and it was all done pretty much in a room, we were there the four of us and we just played it live. For the most of the time when you record, you do everything separately. You do the drums, the guitars, the vocals and whatever, but we didn’t do that and I think you can hear it on the album because you can feel our energy. It was just amazing and so much fun.

How was it like to write with the other bandmates?
We actually just started doing that and it’s great. It works so well. You don’t always find people that are great musicians and also really easy to write and work with, but I just love to have them because we just have a really great connection with each other and we can write pretty easily.

You formed the band last year and since then you are having such an impressive and totally worthy praise. So far, what was the highlight moment of The Regrettes?
I think my highlight was the first time that we were on Rookie and it was so cool because I’ve grown up reading Rookie. But just in general, the best thing that happened was the first time that someone came up to me after one of our shows and was pretty much like “Hey, I love ‘A Living Human Girl’. It’s helping me getting through my depression and everything that’s going on right now. Thank you!” I was just like so taken back by it and this is why we’re here, this is why we’re doing this. This is like what this is all for, it’s for other people, you know?

Besides The Regrettes, are you still in school?
I am, I’m home schooled. I was in school up until like the beginning of this year and then I started to do home school just because being in school was really tricky for me, like miss a bunch of school and then come back and have to make it up. But being home schooled, I can get all that before I go on tour and it’s awesome.

What do you love to do besides music?
I actually really love to cook. I’ve been learning a lot about cooking and it’s so fun. What else? [pause] Mainly music, cooking, spending time with my friends and my family.