High Command have announced the release of a new two-track EP, titled Everlasting Torment, arriving Friday 4th December on digital format via Southern Lord, with the 7′ to follow early next year on Triple B Records.

In keeping with their fantasy storytelling style, the band offers, “in an age of mystery where knowledge is shared through steel, Everlasting Torment offers two fables of esoteric savagery. Gaze upon the sanguine dawn where ancient lands were carved by ice & stone. Scream for mercy as you bare witness to an arcane god’s unquenchable thirst for bloodshed. Ride the frost winds north to the fantastical lands of Secartha. See where the madness began…”

Everlasting Torment was engineered/produced by Seth Manchester at Machines With Magnets in September, and mastered by Brad Boatright at Audiosiege in October. Seth Manchester and Bill Shaner also play synth with additional guitar playing from Matt Marcel. 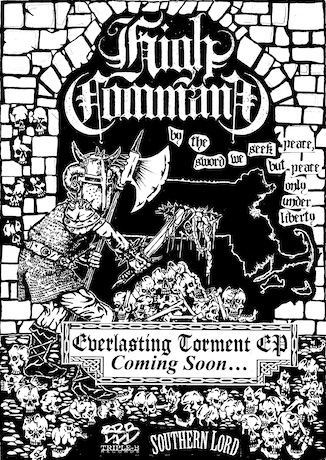