Texas based Post-rock legends Explosions In The Sky have released their 7th studio album, The Wilderness, and we talked with guitarist and songwriter Munaf Rayani on the phone about it.

I remember reading an interview where Chris Hrasky said, about the time leading up to Take Care, Take Care, Take Care, “There were several months spent frustrated, like ‘whatever, we’re done’; not even that depressed, just ‘well guys, it’s been fun. We had a great run.’” I’m curious to know where Explosions In The Sky were mentally working on The Wilderness?
In a similar place that we are every time. Just in great hope of trying to make something better than we’ve already made. That can be a little bit of a difficult task with anything, especially if you’re trying to do better than you did before. I think Chris can be a little bit funny when he talks about stuff like that but, you know, a little bit honest. It can be very frustrating when you’re trying to figure out melodies, figure out movement, and at the same time a perspective that there’s changing. You’re growing older, you hear music differently… I think mentally we were as we’ve always been. Just in a place of great desire of something better.

Between Take Care, Take Care, Take Care and The Wilderness there are three soundtracks for cinema – Prince Avalanche, Lone Survivor, and Manglehorn. I’m guessing it requires less freedom from you since there’s a dependency, right?
Absolutely! Often soundtracks are a little bit easier for us to make because it is somebody else’s vision. We are simply just kind of filling an order of sound. The directors who we’ve worked with have visions of what they would like to hear along with the shots and the scenes in the film that they’ve made. So, when it comes to make our own records, there it becomes far more difficult because we’re the directors and our bar is very, very high. Not to say that the directors we’ve worked for don’t want something fantastic, of course they do, it just is a little easier to do for somebody else than it is for ourselves. With our records, we are the compass and sometimes it’s spinning in every direction and it’s like, “Which way are we walking?” [laughs]

Working on those projects, does it help create your “normal stuff”?
Absolutely, because with all of those soundtracks we stayed sharp just musically and also physically. Our hands stayed warm, our melodies stayed fresh. Things that work really well for picture may not necessarily work for our albums, and we understand that. If we didn’t make those soundtracks then we might be trying to play some of those melodies into our album and then we would have discovered, “Oh, this doesn’t work. Oh, this does work”. So, I think it’s a very good thing, a very great opportunity that we had to do those soundtracks because it allowed us to stay on top of our musical abilities.

We really need to talk about the cover art. Whose idea was to commission the work to Chicago-based artist Jacob van Loon?
It started from our friend Jeremy deVine, who runs the American label Temporary Residence Ltd. Our long time kind of in-house artist, Esteban Rey – who’s done almost all the records except for one, which is then by a great friend David Logan – just didn’t have the time and the focus to do the latest artwork and so we started to look for someone that could help us do this. Jeremy deVine he started asking around and he brought the suggestion to us. There was a great artist friend of his, who makes posters if I’m not mistaken, who told Jeremy that he should talk about Jacob van Loon to us. Jeremey mentioned it to us, we saw his artwork, and everything felt it. Once we started talking to him and explaining the things we were after… yeah, he drew what you see now. He had very loose guidelines but also somewhat specific, you know? It would be something like, “Hey, we are walking in this direction. What you find or what you feel… that’s what we want but walk in this direction.” That was kind of the guideline. Not telling him exactly what to do but some idea of color, feeling, and other stuff like that. We also allowed for him to kind of run with whatever it felt most natural for him. As you should allow any artist. Even if you’re commissioning a piece… if that’s a person who’s art you believe in or enjoy then you have to allow them to move freely. If we would’ve dictated every moment then I don’t think the artwork would have been as good as it turned out. 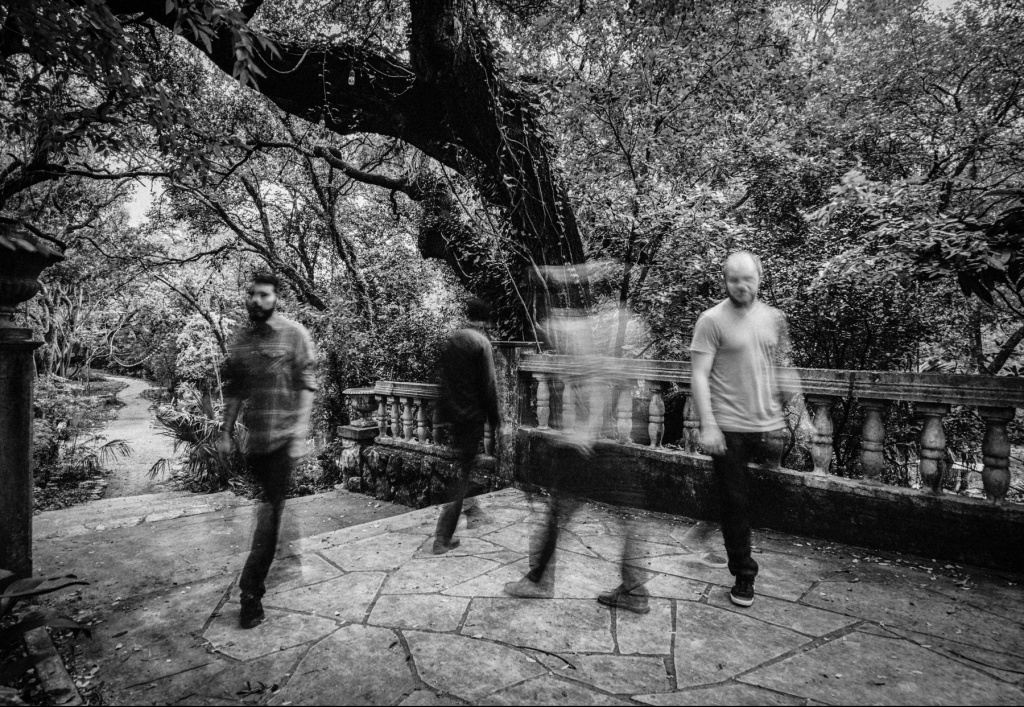 I watched the The Wilderness’ Art Process video and I couldn’t help thinking that it’s one of the best descriptions that can be made of the album. Method, chaos, little pieces together making something that’s bigger than the sum of the parts, and a sense of unpredictability that is illustrated by the use of water coloring. Do you find a parallel between Jacob’s work and process and EITS’s work and process?
It must have some relation because it matches so well. The process that we took on to write the record… I can’t even fully explain because I’m not sure exactly how it happened. Often times for us we try, and try, and try for days, weeks, months, and years and all of a sudden we have a song, or three songs, or we have an album. And we can’t remember how the process actually occurred and I feel that maybe Jacob experienced something similar. He just started and once he got some direction from us and then… almost like a stream of consciousness. Just let the hand move and the mind run, and the same thing for us as we were writing melodies. Just allowing the melodies to run, expand, and go beyond our most traditional instruments. I think there’s a deeper, layered connection to the music than so much so on the surface. It’s not so much that we did it exactly the same, but we did it with a similar spirit.

I remember talking with Caspian’s guitarist Philip Jamieson of the importance of time in composition and the process of “back and forth”. There’s a song on Caspian’s last album that took the band something like nine months to finish… Philip said he was going a little bit insane over it. Do you find Explosions In The Sky in the same position?
Yeah, absolutely! This album was four years in the making. For two years, while we were touring after the last record came out, it was more just like conversation and perhaps just a little bit of melody here and there. Then for two years solid, meaning for two years from morning until night, we thought about this music, we played this music, we practiced this music, we’ve exchanged melodies, we sat in a room together, we sat quietly together, we worried together… all these things in the course of two years solid and some of those songs took that long. The initial seeds to some of these songs are years old, before even the last record and then kind of cultivating those. But then again the song “Infinite Orbit” on this new album was created within two hours. It was really crazy because it was a different song that we’d been working on for a year and then go to the studio and try so many different things. It wasn’t sounding right so we disassemble it, survived two or three pieces of it and then wrote everything else around it. BOOM! In a morning session there it was. Inspiration can come in a flash like that but most often it takes a great while.

Another thing I remember talking with Philip was the importance of visual elements in instrumental music, perhaps more than in other kind of music because there are no words painting that picture for you. What’s the importance of the visual aspects and elements in EITS’s creative process?
Well, in all the previous records we’ve been very specific in our stories to one another, and idea, and the scenes that we saw that helped kind of facilitate how the song was written or what the song is becoming. But this record was more abstract thinking. I mean, there are a couple of tracks, I should say… The very last track (“Landing Cliffs”) was a very specific vision that we had about starting deep in space and then working our way through the atmosphere and through the sky, and down to the trees, all the way to where you finally end up at a campfire. This was a particular specific vision that we had, but for a lot of the other songs it was more abstract thinking. I think visual elements are quite important in instrumental music because you’ve kind of paint the story, paint the picture with just melody and that’s an important thing, but for us this time around it was not so much a specific picture that we painted, but more of an idea that we were trying to convey.