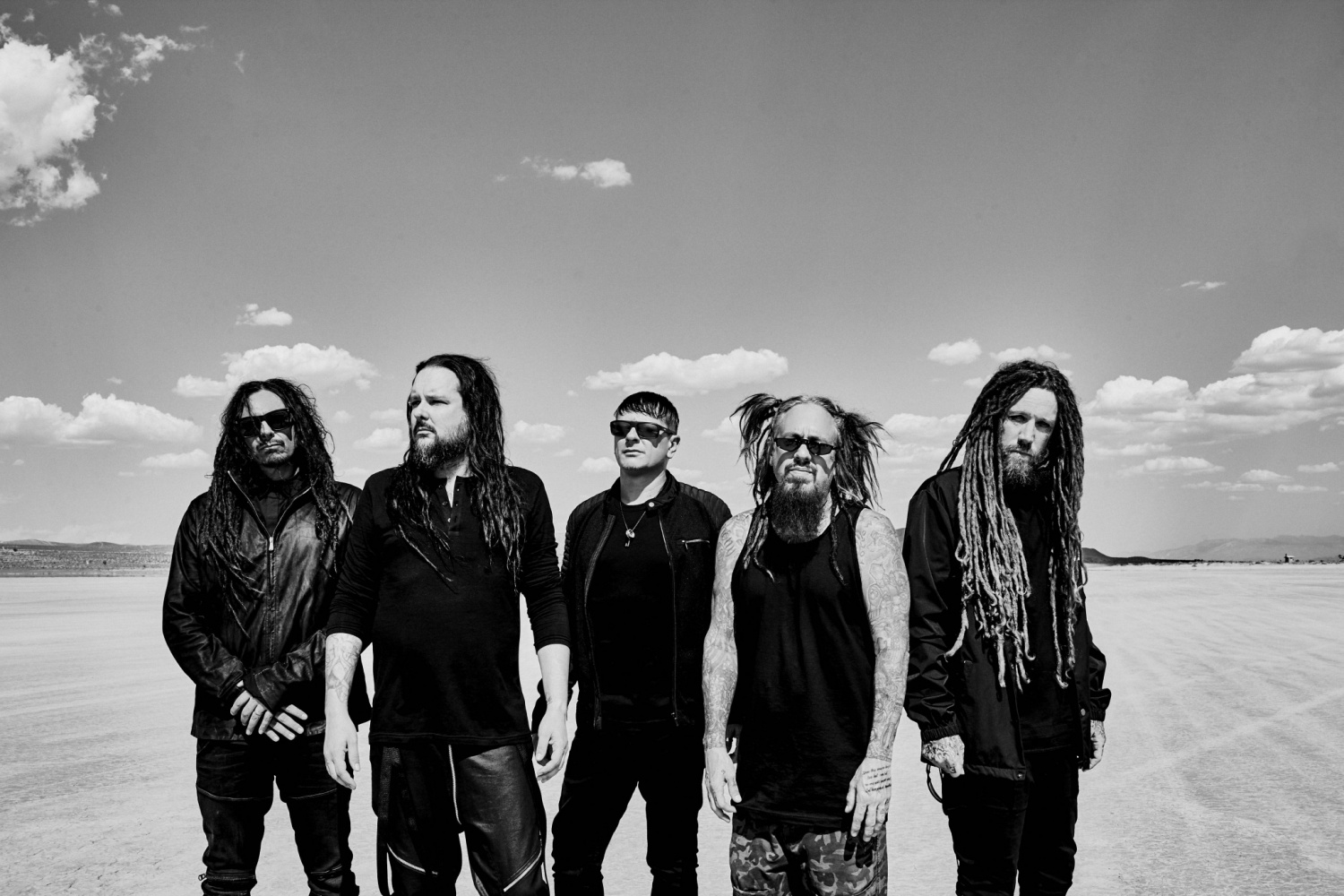 It’s hard to believe we are already celebrating the 25th anniversary of Korn’s debut album, but the record responsible for spearheading the famous- and for some infamous- nu-metal movement has indeed achieved classic status, as surreal as that statement might sound for those of us who grew up listening to its angst-ridden songs.

Having that in mind, where are Korn at, a quarter -century after that big, initial impact? Well, luckily, they are in a particularly good place, musically speaking: on The Nothing we find them simultaneously taking a quick look at the past while anticipating what lies ahead. There is certainly enough here to leave old school fans excited – guttural vocals, scratchy downtuned guitars, that throbbing “Korn” bass we all love – but they make it clear the goal wasn’t to recreate what had already been done and that they wanted to keep evolving; therefore, the album ends up getting the best of both worlds – the decadent, often uncomfortable aggressiveness of the first studio efforts and the more melodic, electronic – inspired side explored on albums such as The Paradigm Shift. It’s a unique journey, one slightly uneven at times, but certainly rewarding.

“The End Begins”, the first chapter of this marvelous adventure, might be nothing more than a short introduction, but its brilliance makes it one of the highlights of the record. The use of bagpipes immediately takes us back to the legendary “Shoots and Ladders”, and, from that moment on, we are hooked; not only is the trip down memory lane highly effective (even though it does not constitute the only time the instrument was used by the group, it just remains the most fondly remembered occasion) but also quite symbolic, since it takes place 25 years after we first heard that unforgettable bagpipes melody on the seminal 94 debut; were it all began, it begins again. Nonetheless, the similarities to past works don’t end here and can also be found in the lyrics; how? Well, keep reading to find that out.

We used the word “uncomfortable” to describe the musical atmosphere of the band’s early days, and it clearly is the perfect adjective : Jonathan Davis would often sing about delicate subjects, about being molested as a child on “Daddy”, a song so scary, so dark and so freaking horrifying that listening to it truly was  (and continues to be) a visceral experience, and the description of those childhood traumas only made the albums sound even more powerful, allowing Jonathan to unleash a raw, yet poignant fury that resulted in some extremely passionate vocal work.

On The Nothing the pain is also present (has it ever gone away?), just look at how the title suggests a feeling of deep emptiness, a feeling that everything (or what matters most, at least) has been lost. The only difference, however, is that the misery doesn’t have its roots in the past- it exists in the present.Last year Jonathan lost his mother, and if that wasn’t enough, he was also forced to deal with the loss of his estranged wife Deven, the victim of a drug overdose after a lengthy battle with mental illness and addiction. Understandably miserable as he watched loved ones get taken away from him (in spite of all their problems, though, he issued a statement honoring her wife’s memory), the solution he found to get back on his feet was the same as always – to use music as therapy, a way to channel negative energy into something productive, which explains why he decided to write the lyrics in his Bakersfield studio while his bandmates worked with producer Nick Raskulinecz in Nashville, Tennessee.

It was then, all alone with his thoughts and painful memories, wrestling with grief and anger, that the troubled but charismatic lead singer went through hell once again, surviving to tell the story- and boy, what a fantastic performance he ends up giving. Just observe the agony in his voice as he delivers the lines “Why did you leave me? Why did you leave me? Now they are free/ And they are coming after me” on the aforementioned “The End Begins” or try not to feel sorry for him when he is heard sobbing, at the very end, while uttering the words “Oh God, fuck”; and what about the chilling intensity with which he sings “Cold” (a song that seems straight out of the Issues album, even reminding us, when the angry and disturbed vocals kick in, of “Twist”, from Life Is Peachy), or the way he kind of creates a spiritual sequel (deliberately or not) to “Daddy” on “The Seduction of Indulgence” with the psychological violence of its lyrical content, whose most chilling passage we kindly leave it here for you to read and digest: “Skinning me, stabbing me/Touching me, licking me/ Rapping me (repeated over and over)”. The fact is, Jonathan might not be the most versatile singer out there, but very few others, especially in metal, manage to display such emotional depth. He is not merely singing, he is letting us be a part of his cathartic journey, and we are more than happy to join him because, well, we believe in him.

Still, Jonathan is not the only one who shines, as the whole band sounds motivated and tight. We noticed how the album is, in some ways, reminiscent of The Paradigm Shift, but the songs are much more memorable, there is a healthier balance between heaviness and melody (think of a cross between their 2013 release and the critically acclaimed Issues ,while still being its own product) and everything just feels and sounds better. If The Paradigm Shift, despite being overall decent, lacked something and was actually a bit “boring” to listen to all the way through, the same does not happen with their new studio effort: one feels the band worked hard to make these songs stand out, and it paid off. There are a few somewhat inferior tracks (such as the aforementioned “The Seduction of Indulgence”, featuring an interesting eerie atmosphere and the haunting lyrics mentioned above, just not as good as the rest of the material), which is why the album can be slightly uneven at times, but even that one is never dull to the point of being considered filler. The most inspired moments ,though, are really amazing, and there are plenty of them: addictive and catchy choruses on “Idiosyncrasy” or “Finally Free” (among others), intelligent, carefully worked contrasts between loud and soft passages( Just listen to “You’ll Never Find Me” or “The Darkness Is Revealing”, for instance) and the overall manner in which the band sounds urgent, an inevitable consequence of not only what they’ve been through, but also of their burning desire to let the world know they are not relics of the past, but rather veterans of the music industry who still have something( actually , a lot) to say. It’s easy to lose that “hunger” as time goes on, and Korn themselves have had their ups and downs over the years, but it seems the return, in 2013, of guitarist and friend Brian “Head” Welch has gradually made them stronger – those positive vibes were already pretty obvious on The Serenity of Suffering (a true return to form), with the resulting momentum not showing any signs of slowing down.

In the end, what we are left with is an absolutely dynamic and incredibly strong record, not as heavy as its predecessor, sure (although still filled with aggression), but definitely darker, more personal, well produced (the production is clean without ever being overly polished) and, most importantly, equally as exciting- when we are done with the album, we immediately want to go back to it – witnessing these guys push the boundaries of their own creativity really is fascinating for any fan.

All in all, this is the sound of one of the most iconic, talented and innovative groups of the ’90s proving they still fucking have it, sounding familiar, yet highly different at the same time, and delivering a brutally honest statement: they are, quoting their 2002 single, here to stay, whether you like it or not.

Words: Jorge Alves // Photo. Jimmy Fontaine – The Nothing is out now on Roadrunner Records.