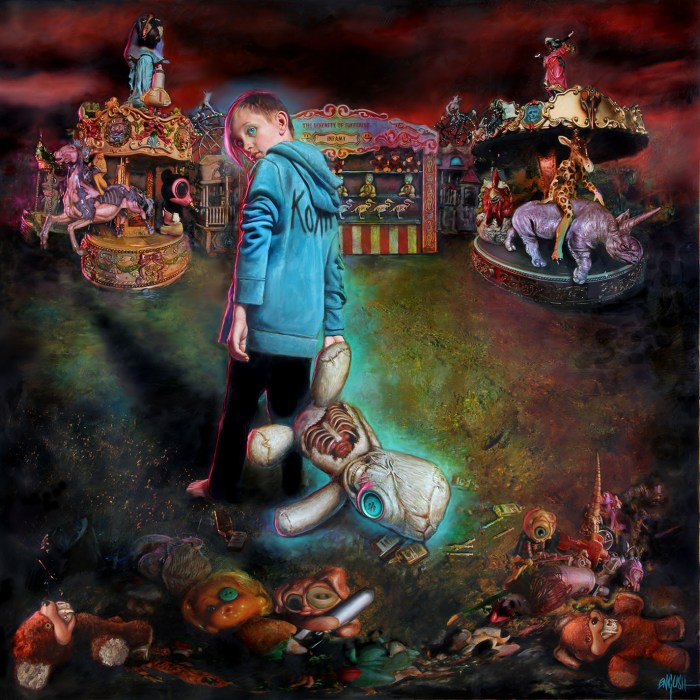 The Serenity of Suffering is Korn’s 12th studio album, it also represents their return to a label well known for them, Roadrunner Records.

Well, they grow up so fast… Cast your mind or lost memories to 1994, Korn had just released their game changing self-titled debut album, since then nothing was the same, they changed everything, literally everything… Now, that we’re in 2016, 22 years have passed, we’re older, they’re older and listening to Korn’s new album, the feeling is exactly the same, mind-blowing game changing over and over again, it seems hard to do, but these dudes are always reinventing their sound, innovating and with same excitement and balls to create whatever the fuck they want.

The Serenity Of Suffering sounds like a blend between 2002’s Untouchables and 2010’s KORN III – Remember Who You Are, but with a new twist, Jonathan sounds angry and fucked up, his vocals are more powerful than ever, Nick Raskulinecz production is top notch, everything sounds massive and heavy. Packed with heavy riffs, the dynamic duo Head and Munky are the ones to blame for that, Fieldy’s bass is finally back and tracks like “Insane”, “Rotting in Vain”, “The Hating” or “A Different World” (featuring the guest appearance by Slipknot frontman Corey Taylor) are simply put old-school feels like Korn anthems.

The Serenity Of Suffering is a comeback to form, Head’s return was the key element in Korn’s new set of dynamics influencing the whole creative process. It still sounds impressive, refreshing and over the top, these dudes still sound unique and more organic than ever.