It didn’t take long for Neck Deep get the praise they earned and at their second album, Life’s Not Out to Get You, the band became one of the new pop punk bands to look forward. In the meantime the group went through some really heavy stuff with one of their members leaving the band, but now they’re more than ready to move forward. We caught up with Ben Barlow that was kind enough to give us a full insight of their latest effort and more.

Since you guys formed this band that things have happened really quickly. Some of you quit your day jobs and you dropped out of university. Was it easy that transition for you to become such influential and important band in the pop punk scene?
I’m really not sure, it kind of happened. We just did what we always do. We just wrote good songs that people really connected to and we’re a passionate band live. We try to keep it as energetic and passionate as possible. I think people saw that. There’s just something real about it, I think people really connect with us. People don’t need to be intimidated by us or afraid of us.

Last year was huge for you guys! You toured heavily around the world and developed your second album, Life’s Not Out To Get You. How did you approach creatively this album?
I felt like just genuinely we were all feeling a lot more creative. I think we’re in a much better creative space. We’ve been demoing and writing songs for a long time before we actually went through recording the album. It wasn’t as rushed as it was with the first album. It was generally great. We went to an outside studio, for the first time we recorded in Wrexham with my brother. Even though we did a lot of the writing with my brother, we decided to record the album and have it produced by Jeremy McKinnon of A Day to Remember, Andrew Wade and Tom Denney in Florida. We flew to the States and it was just after we’ve been on tour for about two months and then we went to Florida for another two months to record the album. It was insane and really cool. We recorded the album at Jeremy’s house and we were basically with Jeremy every single day. [laughs] We wrote in a little house that we lived in and so we just lived in Florida for two months, but it was really great. It was different from what we’re used to, so it’s good to be outside our comfort zone and try different formulas, and I think that really helped, because all three producers came up with some awesome ideas.

In which way do you think the band’s sound has progressed from Wishful Thinking to Life’s Not Out to Get You?
I think it’s just a more polished record. We didn’t try to do anything different, we didn’t want to change our sound and we didn’t want to experiment too much with this one, because that can induce to something that we didn’t want and what people want is just more of the same, you know? I think we just stepped up. I said to everyone before the record came out that it sounds like Neck Deep but just better than before. [laughs] I think it’s just the most polished and generally better all around. I think every element and every individual instrument are better. I felt on this record that my lyrics are way better. It had a message to it that really connected with people and I think people maybe needed that. Not necessarily negativity, but there’s a lot of music out there that doesn’t really lend to getting better, even though people find meanings in music through different ways. Sometimes a really sad song can make you feel better, but I just want to make happy music to make people feel better, you know?

What does the title Life’s Not Out To Get You mean to you guys?
It comes from the lyric in the song “Gold Steps”: “What you give is what you get / … Life’s not out to get you.” It just means that you’re responsible for what you do, like you’re in some sort of way of control what’s happening to your life right now, do you know what I mean? Life’s not out to get you, life is never going to respond to what you put out there. Whatever it is what you’re pouring out there… What you give is what you get, so if you give the good stuff, you’re gonna get good stuff. If you give bad shit, you’re gonna get bad shit. It’s not like life’s out to get you for all the terrible stuff that happen to you. It’s what you kind of attract to yourself. 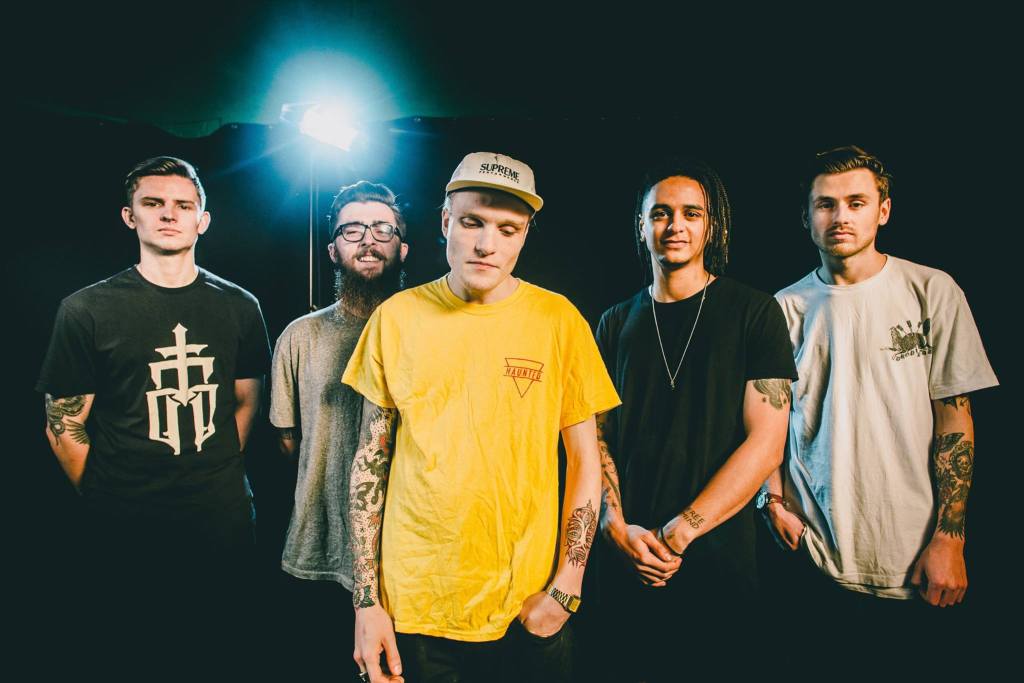 “Can’t Kick Up The Roots” is such energetic song about what it was like to grow up in a small town like Wrexham. How much that town influenced you as a musician?
I’m not really sure. I don’t know if it has influenced me as a musician or anything like that. I think it’s more like that kind of notion of being stuck in a small town and kind of yearning to get out… Yearning for bigger things, wanting to go to different places and bigger cities. I feel like it’s not like how I grew in my own town, it’s just I feel like I got to a certain point from a pretty young age – probably from about 13/14 years old – where I needed to get out of here and experience the world. It definitely gave me a basis, you know? All my thoughts are there and all my greatest childhood friends are there. I still see them back at home. Home to me just reminds me of some normal things, just like normal life. I can go there now and I can escape. I can just be me and I can just be the me that I was before I was in the band. I can be with people who don’t care about if I’m in a band. For me is really now a place because I’ve managed to escape my own town. I’m not there anymore, but when I do go back it’s nice because it’s like an escape for me. I can kind of just hide away in the middle of nowhere and no one would ever have any reason to go there really. It’s just nice to hide away for a little bit. It definitely gave me an overall inspiration, but I think a lot of that it doesn’t necessarily the place so much but more the people, my friends and stuff.

The track “December” breaks a bit the upbeat, fast pace of the album, but in a good way. How was the writing process for this one?
“December” was pretty different. The idea for the song came from Jeremy. He came to the studio one night and he said “I woke up in the middle of the night last night and I took a picture of it and it was like this door opened and this little bit of light just came through the house.” He said “I want to write a song that feels like this. I want to write a song that captures this.” We collaborated on the chorus. Jeremy wrote most of the chorus and I shipped in and I wrote all the verses. We kind of shared that one pretty equally on the lyrics. We knew we wanted an acoustic song on the album and A Day To Remember are obviously known for that acoustic tracks. We just really wanted to focus on a nice, pretty acoustic song and give people the feels as people call it. [laughs] It’s definitely an emotional one and it was kind of written from past experiences. It’s a collaborative song, it has elements of both me and Jeremy. It’s one of my favorites from the album for sure and I know a lot of people connect with it.

The album’s artwork is colorful and funny, which has a lot of little details on it and you also created a comic book based on the artwork. Can you enlighten us about the meaning behind that artwork?
We worked with a guy called Ricardo Cavolo. I wanted something kind of more hands drawings and more artistic, something with lots of little elements in it that we could use as an image for our band. I found Ricardo on Instagram. Everyone I follow on Instagram is an artist in general. I found Ricardo and I was instantly like “This guy needs to do our artwork because he’s incredible.” [laughs] He came back with the album artwork and it was almost like scary how spot on he got it. He managed to put things related to the lyrics without even hearing the album, so I think it was the perfect match. He really wanted to do and helped us to really achieve that. I think his vision was very much the same as ours and we just lend this thing on him and he just did good. The comic book was something that we decided to do as a little extra. Ricardo came up with the basic idea for the story and then I wrote the words, so it was kind of a collaborative effort and it was more as something cool for fans and collectors to have. It kind of explains the whole story behind the artwork, which is the story of a guy and the whole story is about him trying to reach his paradise on the top of the mountain, but first he has to go through a lot of trials and tribulations. It’s basically the story of his life. You have to work and you have to go through some tough times before you can get to the things that you want the most. You have to go through those struggles and really push through. You kind of have to have a shit time to realize that things can get better and you can make it better. I think everyone has to go through this journey of life and the comic is just a cool metaphor for all that.

2015 has been a roller coaster of emotions for you guys. How do you see Neck Deep now and what are you aiming for the future?
We’re really just aiming to tour as much as we possible can, carry on to be the best band we can and keep things interesting. Aside from just playing shows and put out new music, we’re going be looking to do a bunch of cool stuff to keep people engaged and keep people interested. We’ll be releasing maybe some limited things, lots of new merch and there will be lots of cool openings along the way that people can get involved with. You don’t have to just go to a show to feel connected to us. For anyone that is a big fan of our band, there will be plenty of cool things coming along the way. But a lot of touring and a couple of new music videos in the future.

What’s your favorite record of 2015 and why?
I really like Knuckle Puck’s album, Copacetic. I think that’s my favorite of the year. There’s probably so many… If I really sat down and thought about it, I could probably have more, but I think Copacetic is a really strong record and that’s definitely the best stuff that they’ve put out yet. Everyone should check out Knuckle Puck’s new album.