Montreal four-piece TOPS are back with a brand new effort called I Feel Alive. Their new songs are uplifting, honest, and much needed to ease our hearts. TOPS’ vocalist Jane Penney spoke to us about the new album and how’s been like for them dealing with surreal times like these that we’re all living right now.

In the midst of these surreal times, I found your new album to be uplifting and joyful, even though the songs are a balance between the good and bad of everyday life. It made me forget for a while everything and made me feel softer. Do you feel the same way when you play your music or even when you listen back to this album?
Playing music has always been a way for me to ground myself, and find peace of mind. Writing with TOPS are often some of my happiest moments, I think playing music with other people is one of the easiest ways to enjoy life.

I Feel Alive is your fourth full-length, following 2017’s amazing effort, Sugar At The Gate. When did you start working on this album and what was your mindset while going into the writing process?
Some of the songs were already taking shape as we prepared to release Sugar at the Gate, but we recorded the entire record over the course of a few months in 2018, which is actually really fast for us. Since we self-produce and record everything we have had a tendency to take years making records, but we felt like we’ve grown enough as musicians that we could jump in and get it done. Our attitude towards writing was to do whatever feels good for each song, to commit to our decisions, and be free from self-doubt. We basically had as much fun as possible when it came to the production and instrumentals, and then spent a month specifically on the vocals and lyrics trying to make them as good as possible.

This was the first time that Marta Cikojevic recorded with you guys since she joined the band as a live member in 2017. How did the recording process go and what did differ mainly from the previous one?
Having Marta join us on keyboards allowed us to record about half of the songs live in a studio, which is something we’ve never done before. When I’m writing a song, I tend to play keyboard in a way that aids the writing process but isn’t particularly interesting on a recording. By freeing myself up from playing the blocky these-are-the-chords style keys that I often start with we were able to get to a finished point with the arrangements much quicker, and I was able to conduct the process a bit better without having my mind split by multi-tasking all these different elements. It also allowed me to bring in my flute playing more which is something I really enjoy doing.

“I Feel Alive” is the perfect introduction of the album, tell us a little bit about the story behind this one.
This song came together really quickly, we wrote the entire thing in less than an hour. To me it really captures the energy that we had as a band when we were making the album, and also the feelings I needed to express. The lyrics are pretty self-explanatory, that it’s about a relationship that starts when you’re already committed to someone, although in my defense we weren’t actually exclusive haha (more information than I probably need to share!) It was a situation, which like many romantic situations in my life, proved to me that when you find a connection with someone it’s often at a bad time, under inconvenient circumstances, maybe it’s deemed socially unacceptable, but the love you have to fight for is the love that’s worth it.

Jane, your voice is so much expressive on these new songs, with a riveting energy and passion. What were your main inspirations while writing the lyrics for these new songs?
I always try to bring a bit of my own emotional experiences into the song writing, because I think on a basic level music is about a transference of emotive energy from one human to another, but it’s a complex and elusive process, you can’t rely on your words to transmit that meaning directly to whoever is listening. Sounds and chords do just as much of the work in this, and often we would start with an instrumental basis which would conjure feelings and thoughts that would then become the basis for the songs. So, I take that personal sensation and try as best as I can to give it depth and meaning beyond myself, so that it can create meaning for someone else. It’s the marriage of emotional substance and song craft that interests me.

There’s a lot of introspection on this new album, do you feel that you closed a chapter and that I Feel Alive is a totally new beginning?
We definitely work through some things on the record, I think that’s a fair assessment. It feels like the apex of certain musical preoccupations that we’ve had since the beginning of the band.

The artwork for your album is raw and beautiful, shows you in different posture, in colour and suggests a different mood. How does this coincide with the album’s content?
The record is extremely honest, and the emotional realm is quite broad. We chose a photograph that feels contemplative, the look on my face makes it clear that mind is somewhere else, and I think that reflects the scope of the different reflections on the album well. We chose the title I Feel Alive because it encapsulates the vitality that we felt while making the album, but it was important to me to complicate that somehow, and the cover achieved that.

Please correct me if I’m wrong, but the artwork was inspired by the work of photographer Thomas Ruff?
Yes! You guessed it. It was a reference that the photographer Moritz Freudenberg showed me as we were conceptualizing the shoot. As an artist I love collaboration, I think it’s one highly underrated right now culturally and that the individualism that we prize is actually pretty toxic to creativity. Originally, I wanted to have a portrait done with soft lighting, something that would look beautiful on a vinyl, but Moritz’s was more interested in expanding the meaning of the title and the album with the visuals. He brought his skills in visual communication to the project and it ended up in a much more interesting place. 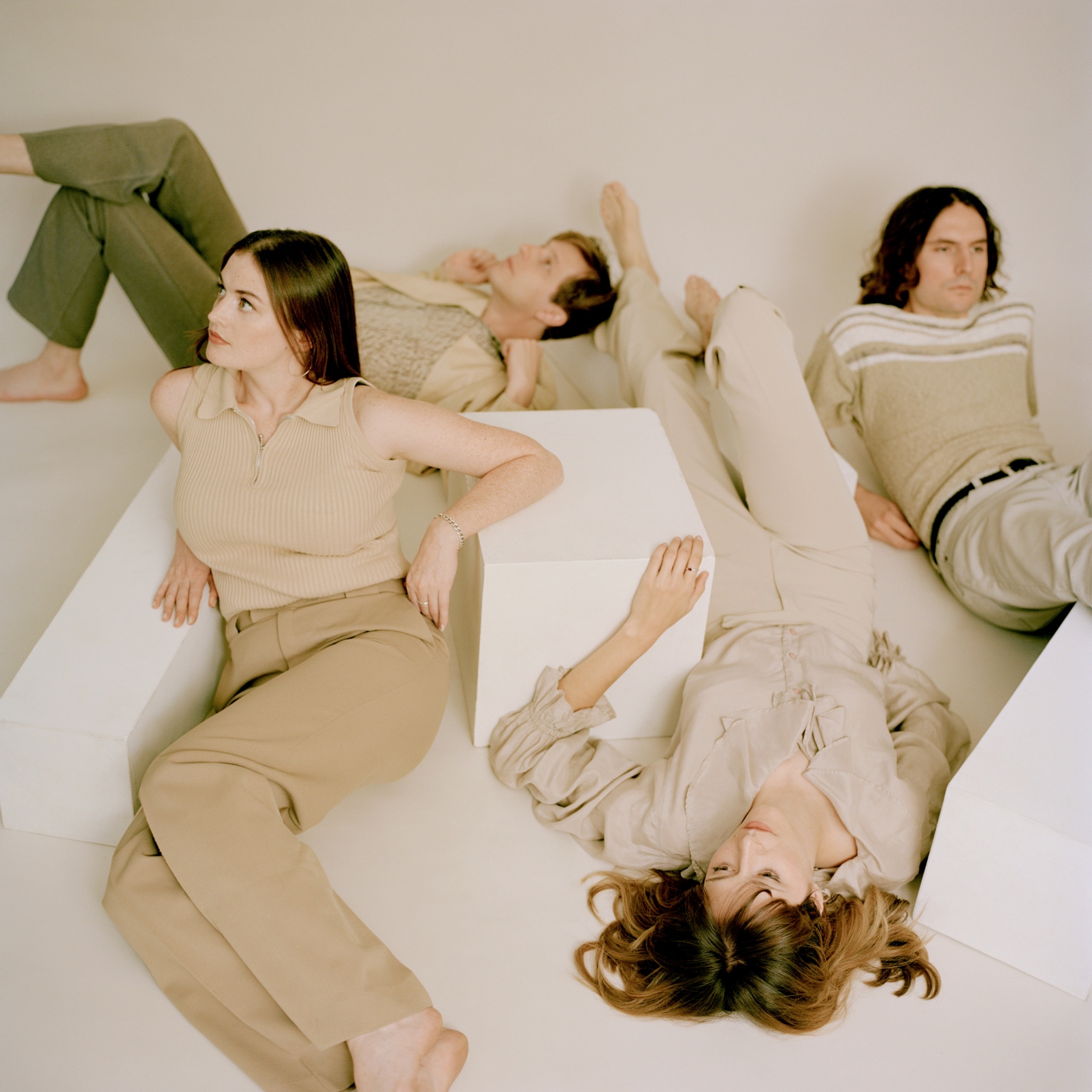 “Our attitude towards writing was to do whatever feels good for each song, to commit to our decisions, and be free from self-doubt.”

Last year you guys launched your own record label, Musique TOPS, and released two songs, “Echo of Dawn” and “Seven Minutes”. What led you to start your own label and how’s it going so far?
For us it was the best option in terms of sharing our music with our audience. The way that we’re doing it we can still access proper manufacturing and promotion networks, but we get a larger share of the profits. I think labels can be a really important part of an emerging bands career, I know for us Arbutus Records was instrumental in establishing our profile early on, but at this point we were looking for an outlet that would allow us to have the most direct relationship to our fans as possible. It’s definitely a bit harder than signing to a label, basically you’re fronting your savings instead of getting an advance, and it’s not like we had a lot saved anyways, but it’s also been a really rewarding experience.

How are you dealing with the isolation knowing everything that’s going on right now?
I got quite ill, and didn’t have anywhere to stay, so it was initially pretty challenging and I didn’t really do anything except the bare minimum required to get our record out. My friends really stepped up to help, and it was so incredible to get the support that I did. Now I have somewhere stable to stay and I’ve cobbled together some recording equipment, so I’m trying to balance finding time to make music, healing and doing press and things for the record. It’s tough to try to remember how I felt when I was making the album, it feels worlds away now.

What are your best advices for everyone that’s home and doing their best to stay safe and keep other safe as well?
The advice I’ve been giving myself, though I’m not always taking it, is to just do what comes naturally and not read too much news about the virus. I mean, stay informed of course, but it’s getting harder and harder to look online and not be completely inundated with doomsday headlines and pandemic related content. I’ve found myself drawn to my phone more than ever, but this is such a good opportunity to unplug and go inward. I guess it’s just a balance, but in the meantime, I’ll do whatever feels right.