After going through a rough time during the creative process of their new record, The Wonder Years challenged themselves to deliver a record that would better define them as musicians and bandmates. No Closer To Heaven is all that and more. We couldn’t miss the opportunity to chat with bassist Josh Martin, who was awesome by letting us know even more about the band and about their amazing record.

Your new album No Closer To Heaven has landed at #9 on the Billboard Top Albums, making it the largest debut of your career. How do you feel about that?
Oh really? That’s great, I didn’t know! There’s been a lot going on, but we’re really happy and humble about what happened so far. We’ve a lot of people reaching out to us and they’re very kind with what they’re saying which is great and we just try to do our best to put people on a position that it’s favorable to them to buy. We’ve done a whole run of instore performances where we come to play “as long as you bought the record, you come to see us.” It’s pretty great.

You said that this new album is the best one you’ve ever made. What makes it to be that way for you?
I think every record we make, we try to challenge ourselves to try new things and write better songs, and that’s not to say we think the old records aren’t good, but we just think that we’ve been the best of expressing our viewpoints and our musicianship on this one better than we’ve ever had before. I think we did a lot of interesting work musically on this one and I think our singer Dan made an effort to kind of approach new topics in the lyrics than he used to as much or as deliberately and I think he did a great job with that.

Dan suffered from writer’s block while writing the lyrics for this new album. How did that affect the whole writing process for this album?
Yeah, a little bit because we write all together… Dan writes all the lyrics and helps with the music. It has happened before, where someone is frustrated because they are not being able to come up with anything and they have their own writer’s block. That’s why we’re kind of a team and we try to work together. We would usually be working on songs that we really like, you don’t have any lyrical ideas and he would be like “You don’t stop! I don’t know… just keep going and I’ll try to catch up.” So we wrote our songs with a kind of open-ended. We didn’t find slighty out of tune, we didn’t share the lyric process with anyone, gave us some time to work, so a lot of some freedom was no melody there, but then you have to adjust eventually or he would write a great melody that he would normally in the begin of the music.

What did you do differently this time around while writing these new songs?
He (Dan) tried to change his approach a little bit and when we sat down to find out what was going on his mind, how he could speak to somebody – not just in America book but the whole world – and he really took some chances I think, whining stuff that might be considered too political for us or something, but the point with it to be political for me it’s trying to get people to educate themselves just as a lot of us have about ways of equality, gender equality… Punk music has been dealing with that forever, but now it’s much bigger. Younger people can really have their voice heard in a big way if we educate ourselves and motivate people to try for a change. It’s kind of a lofty goal, but even if one person tries to do something positive in the community, that’s incredible. And also, if you just want to listen to the record to think the risks are good, that’s also great, do you know what I mean? But you try to know a little bit more socially that empower people, we know we have a young audience… they’re in high school, college and they can make a difference.

What does the title No Closer to Heaven represent to you guys?
It’s kind of like a dedication to the more you learn about a topic the more you start to realize there’s so much to learn and there’s so much work to be done and the point is to keep trying, keep gathering information and keep educating yourself no matter how close you get or how far you’re still are, but you wanna go further. 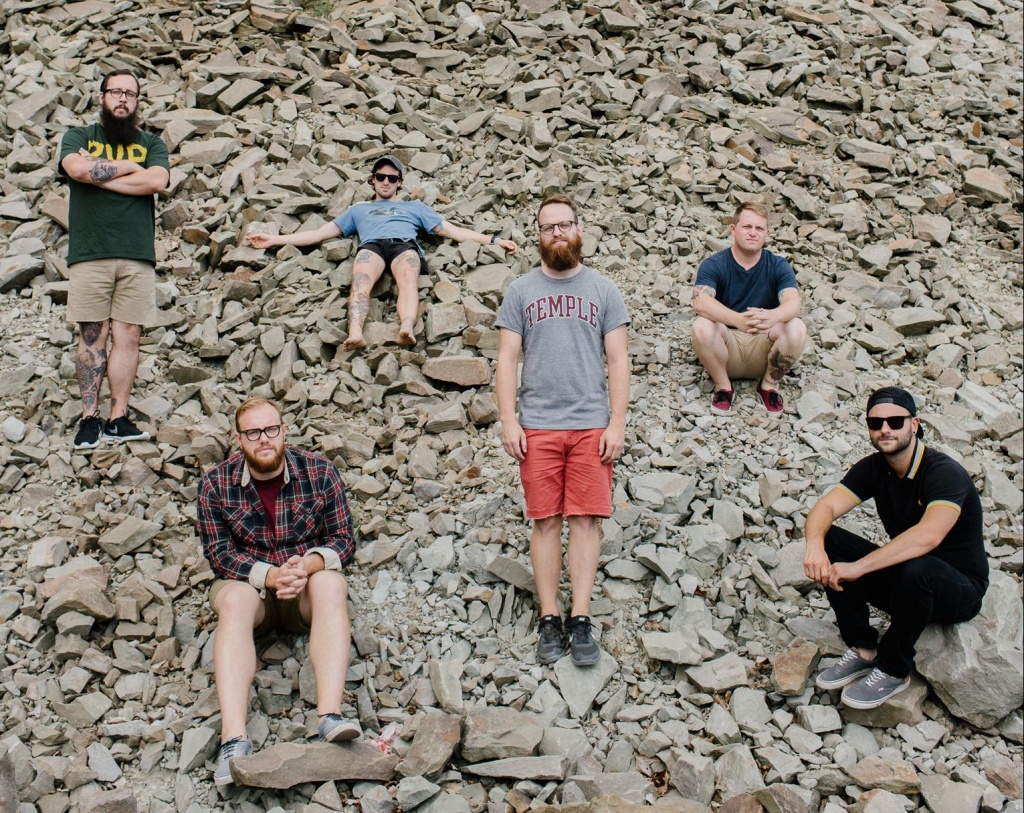 “… the point with it to be political for me it’s trying to get people to educate themselves just as a lot of us have about ways of equality, gender equality… Punk music has been dealing with that forever, but now it’s much bigger…”

The quote “We’re no saviors if we can’t save our brothers” is constantly sang in the songs of No Closer To Heaven. Why’s that?
It’s kind of like a discharge and it doesn’t have to literally be a brother, but it could be a discharge for your community, you know? Supporting people around you and trying to be a positive change in your community as much as you can, help those directly and influence them… It’s a community thing. Dan would have a better answer about that, but it’s generally about community and about supporting one another.

“Cardinals” is such an intense song and the video as well, where Dan is carrying a man unconscious down a street. How was it to shoot that video for you guys?
I thought it was a really cool video for us because the song is really fast and heavy, especially when we play it live, but I feel the director Kevin Slack knew how kind of capture that energy in a different way. For me, shooting the video was super easy because I wasn’t doing anything, I kind of stood around, but it was pretty fraying physically for Dan. It’s weird because it’s in slow motion, but he is running as fast as he can while carrying an adult. It was pretty taxing on him, but I thought it was really cool the way they planned everything out, the way they timed it and I think Kevin did a great job with it.

There are two songs that are about Patsy Cline and Ernest Hemingway – “A Song for Patsy Cline” and “A Song For Ernest Hemingway”. Why did Dan choose those two people?
There’s a thing about Patsy Cline and references that on the song that she’s literally having these dreams and telling people that she thinks she’s going to die and – before she eventually dies – it kind of haunted her. Ernest Hemingway had a kind of self-destructive nature and Dan was kind of connected with those two stories with his writer’s block and tried to figure out how to write and what to write about and struggling with that. I think he connected with some of the stories of those two people and it was kind of an ode to them to use their names on the record.

Jason Aalon Butler from letlive. was a guest vocals on the song “Stained Glass Ceilings.” How did he get in the picture to be part of that song?
That song really focuses on the grow-up privileged in America, and Dan and Jason have formed a friendship… We played a lot of shows together, we did a world tour together and we did a lot of European stuff together. We’re huge fans of letlive. and also Jason’s work. He’s very outspoken and strives to make a social change as well, so we thought that there was no one better to voice their opinion on that track with his awesome voice. He was pretty incredible to work with in the studio, he did an incredible job performing on the song, like the vibe of his performance was incredible and we’re really happy with it.

You had additional group vocals provided by Allison Weiss, Charlie Saxton, Brett Jones, Joanna Katcher, Natalie Schaffer and Dave Summers.
Yeah, we had Allison Weiss, our friend Dave, Brett from Fireworks, there were a few people on there… We had a couple of women joining us because they make it sound better, you know what I mean? We created a whole voice and it sounded awesome. Allison is a great singer and having our friends coming and doing it was cool. It was a funny experience. We just shared our record a little bit with other people.

And how was it like to record No Closer To Heaven for you guys?
It was great. We worked with Steve Evetts. We have a great working relationship with him now and we really know each other and he’s really comfortable. He helps and he captures some great moments. He knows what we like and we know what he is not going to like. I love working with Steve and we get to go Southern California and relax. It’s always nice out there and so it’s a comfortable environment and then you go on and focus on making something great together.

The artwork for No Closer To Heaven is just amazing and it was illustrated by Michael Cortada. What does that image represent?
The front cover is kind of an ode to one of the lyrics in “Cigarettes & Saints” and even lend to some of the most holy idol still has a vice, still has a struggle, you know what I mean? It’s kind of the humanity of a holy idol, and it doesn’t have to be holy related, but even just someone you look up to with great admiration who’s still human. I think that’s a lot where the cover came from and I think Michael did a great job kind of reaching outside of his comfort zone and try something new, he really did an incredible job.

You also have an awesome artwork for the poster of the tour with Motion City Soundtrack, STATE CHAMPS & You Blew It.
Yeah, it was Michael. We were trying to figure out what to do for the tour promotion and we were talking with Michael like “You’re going to strove like a badass animal in the same style with a cool vibe” and he did that. I think he did a great job, it’s a really cool bear head.

Besides this tour, next year you’re going to do handful shows in the UK with Enter Shikari. Are you planning on doing a more extensive European tour in 2016?
There is no plan right now, but it doesn’t mean we’re not going to do it. We’ve done a couple of European tours and we’ll probably do another one, but I can’t tell you when or where. We’re looking forward to the UK shows with Enter Shikari and we’ll see what next year holds, but we would like to get back over there and perform the songs from this new record for everyone in Europe. One of the best parts about touring is getting to see new places, experience new cultures and meet the people from those cities and countries.

NO CLOSER TO HEAVEN IS OUT NOW VIA HOPELESS RECORDS

You can also read here the interview: