Minus the Bear will close the book on their nearly two decades as a band with a farewell tour this fall. In tandem with one last tour of North America, Minus the Bear will release the Fair Enough EP, out on October 19th via Suicide Squeeze Records.

One of the first tracks written for their last album Voids was “Fair Enough”. “It’s interesting because we tried re-doing it twice in the studio,” says keyboardist/vocalist Alex Rose. “I was really into the first new direction as it was very pop, but collectively it didn’t seem to fit. Then we tried a more ambient one… it just ended up being one of those songs that didn’t beat the others.” But as the band was digging through their archives earlier this year, they stumbled upon an early version of the song. “It jumped out as sounding done,” Rose recalls. “I touched up the mix, fixed a few edits and sent it to everyone while we were on the recent Planet of Ice anniversary tour. The other guys all listened together and by all accounts had ‘a moment.’ I think the song had taken on new meaning after we decided to end the band.” Given Snider’s prescient lyrical lament of lost passions and finding “the exact moment we turned it off.” The other three songs of Fair Enough are both a continuation and a culmination of Minus the Bear’s diverse sounds.

The EP album art comes courtesy of bassist Cory Murchy. “The picture on our first EP—This Is What I Know About Being Gigantic—was a blurry photo of the band walking through the forest,” Murchy explains. “The cover to Fair Enough is a nod to that almost 20 years on. The figures are much more defined, coming into their own colors, a little less unified but still working within each other’s orbit. The wonder of the woods has been replaced with a milled piece of working lumber as the canvas. I think it reflects the music in a lot of the same ways—distilled by time and purpose.” 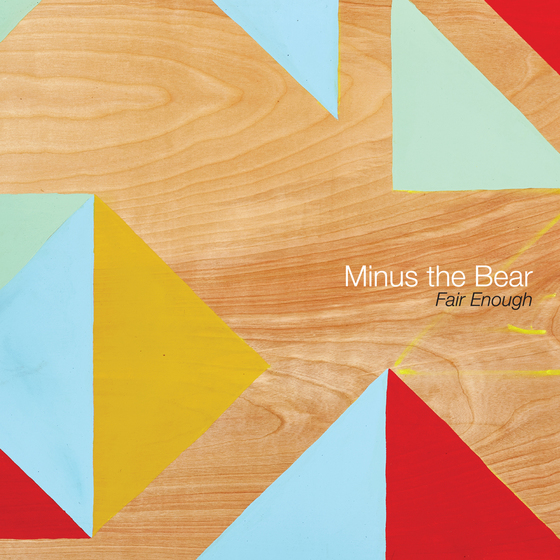 The band have also shared a new single titled “Fair Enough”. Listen to it below:

Read below a statement from Minus the Bear:

After almost two decades of writing and touring the world together, we have decided to close this chapter of our lives as Minus the Bear.

What started as a silly inside joke inside the dingy confines of Seattle’s original Cha Cha Lounge back in 2001 quickly snowballed into years of adventures, creativity, and friendship. We could have never predicted the wild journey about to begin. We’ve accomplished so much over the past 17 years, and we are grateful for the experience.

Undoubtedly we owe all of these adventures to you, our fans. Without all of you, the memories of traveling the world, exploring different cultures, and witnessing the delight of your beautiful faces singing along wouldn’t have been possible. Your support weathered us through storms that easily could have scuttled the band. Throughout the years, it’s you who kept us going. We cannot thank you enough.

This Autumn we head out on our final tour in support of our upcoming 4-song EP “Fair Enough” courtesy of Suicide Squeeze Records.

These final shows are a celebration for the community of fans who gave us so much through years of dedication. We’ll be digging deep in the MTB catalogue and we are honored for the opportunity to play our hearts out for you one last time.