Emma Hern is one of Nashville’s uprising gems that will get you stocked. She combines her powerful voice with catchy and heartfelt retro and soul rock tunes. Emma has recently released her debut self-titled EP and we had a lovely chat with her to know more about it.

Tell me a little bit about yourself and how you first became interested in music.
I would just sing for fun since I was very little, but I went to a very cool high school. We used to have this open mic thing outside every day during our lunch break and I just went up for fun when I was like 13. Some of my teachers came up right afterwards and just informed me that I was going to be in a band with them and that rehearsal started next week, and so I kind of just got thrown into that and it was just so much fun. I just sang in bars starting when I was 14, just as a thing I did in high school and it turned into obviously something that I wanted to do for the rest of my life.

This is your first time putting out your own music. Did you have any kind of previous experience before writing your own music?
I did. I’ve been in a couple bands and we did release stuff, but this was the first time that it was really my own project and it’s just been so much fun. I feel like I’ve been working on it for so long to try to really figure out my sound and I’m really happy with that.

When you were trying to discover your own sound, what were your musical influences to help to shape your music?
I grew up listening to Bonnie Raitt, I love her. Grace Potter was really huge for me. I saw her perform where I’m from in Virginia and that was really the turning point for me. That was when I decided I wanted to do music full time as I saw her play. Her stage performance was just so electrifying. It was so fantastic that it was after that night I was like, “Well this is it. This is what I want to do and I want to dance around on stage just like that.” I also love Tedeschi Trucks. There’s so many wonderful kind of soul rock women, but those are my three biggest influences.

How’s it like usually your approach to the songwriting?
I feel like it happens a little different every time. A lot of the songs that I sat down and wrote for this EP that I released are the ones that just really came out really quickly. I actually wrote the single “Love Is Killing Me” in the shower. The melody just came to me and I really want to be an acapella old school vibe. When I just started humming in the shower, I jumped out and sat down at my keyboard and I just kept pushing that one. Most of the songs on the EP really just came very quickly, but that’s not how everything is. A lot of times I really try to sit down and write every day, even if it’s just working on something or working towards starting a song. I do most of my writing alone. Everything that I wrote on this EP I did it by myself, but I have been getting back into co-writing, which is super fun because it’s always nice to have another pair of ears and then somebody else with some fresh ideas.

For this EP, you wrote everything by yourself. You didn’t have the backup of your band on the writing process, right?
Yeah, the writing was just me for this one, but of course we arranged the songs together, which is one of my favorite things to do, because all of the guys and the girls that I’m playing with on this EP are so incredibly talented and most of them are really fabulous songwriters and artists in their own right. I feel so incredibly lucky when I get to have them come in because everybody has such a distinct sound. They kind of added their own little thing to each one of these songs. When it comes to the arrangements, it’s definitely a collaborative effort and that’s really a fun part, because I know these songs, they’re close to me and I have a sound in my head, but then you get to hear somebody else’s take on it. That’s what is so much fun about being in a big band, you know? You get all of these different ideas and opinions and everyone’s ideas are welcome.

Have you guys written something new together?
We haven’t written anything new as a group. We played a show last night and I played two new songs, so I’m already thinking about going in and record. The next thing I would really love to do is a full length album. That’s something I wanted obviously to do my whole life. I really hope that we can to get in there this year and release it next year.

Most of the EP was tracked live, where you and your band did full takes of each song. Can you tell us more about the recording sessions for it?
This was really special. We actually recorded the single “Love Is Killing Me” about a year ago and then the other songs on the EP, we really recorded the whole thing I think in like four or five hours. That’s something I really wanted to do. I love that kind of old school, live on the floor sounds. That’s what I really grew up listening to and that’s something that I really kind of wanting to emulate with this recording. Especially with the vocals, I love to record those with the band. They feel like you have this energy that you can capture when you’re doing full takes with everyone and that it’s just so hard to recreate the next day when you’re tracking piece by piece. You go in the next day and you’re in there in an isolated vocal booth all by yourself. It was just so wonderful. We had a lot of rehearsals and everyone showed up and I just want everyone to have a really fun day. I baked a lot of snacks and had some beers. It was really special because I have the background vocals live and the horn section was playing on the floor with us at the same time, so it was a huge group of such talented musicians and then to have everyone there at the same time was so special for me. That was something I’ve wanted to do for a really long time. I think everyone was just having a blast that we knocked it out so quickly.

You put out a stunning and bold video for “Love is Killing Me,” which was directed by Jacqueline Justice. How did you come up with the video’s storyline and how was it like to shoot it?
Oh my gosh, it was so much fun. I just kind of had that whole idea in my head for a while and I just called in every girl that I knew in town and everyone showed up for that. It was like if we got to just take a bunch of money, go to the dollar store and buy everything that we ever wanted, do every silly little thing that we’ve always thought about doing when we were younger. I got to do it all in one night, but on top of that I really love working with other women in all aspects of the industry. This was really special because everybody that was in it was girls, except for our one sweet boy that was let us throw cake in his face and everything. [laughs] The videographer was female. The stylist was female. Everything was female. Choreography, hair and makeup was female. It was so many girls and it was so empowering to do that and so much fun. I just wanted everybody to be as silly and over the top as they could possibly be and not take yourself too seriously. I just kind of wanted a combination of the Grease‘s pink ladies meets Thelma and Louise badass women and I was really happy with how it turned out. We just had such a freaking great time that I was just so happy that we all got to be a part of that day together. We shot all that in one night. I will tell you that I never knew how long it was going to take to clean up. It was so much fun. 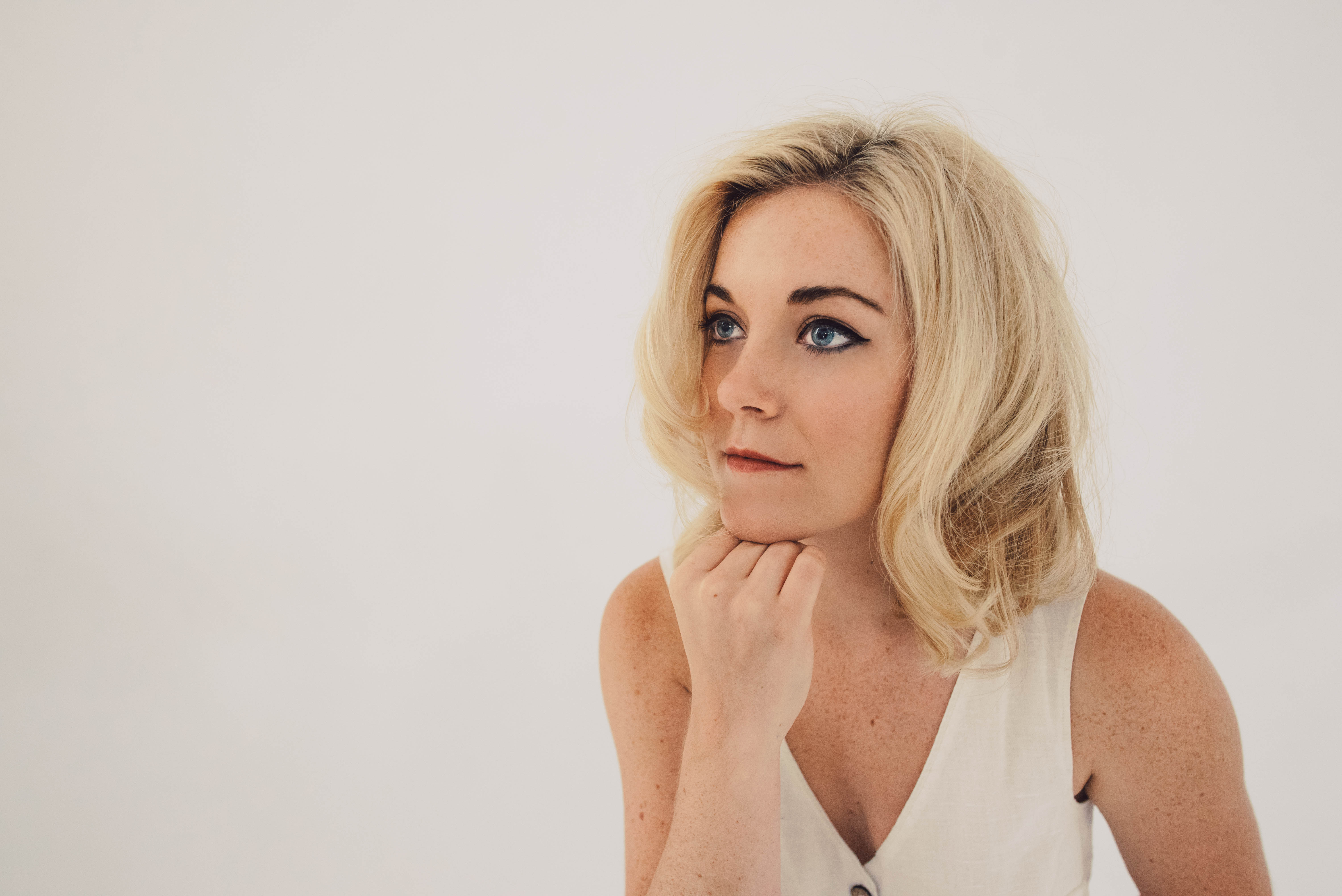 “I do most of my writing alone. Everything that I wrote on this EP I did it by myself, but I have been getting back into co-writing…”

The video feels so empowering, but at the same time is about having fun and a good time, not caring about anything else. You really conveyed that in that video and that’s really great. Are you planning on shooting another video for another song of the EP?
Yeah. I would love to do a video for “Fool”, which is kind of the ballad of the EP. I would really love to do something more stripped down. It’s one of those songs that just came out in like 20 minutes. I just sat down and wrote it on my piano. Most of the recording has such a big band and everything is so much fun, but I love to sit down and do just a very stripped down thing for that song. There’s a big fun music video and then a stripped down one. That’s what we’ve been talking about and we’re hoping that we’re going to get to do that very soon.

What do you love to do besides music? Do you have any other outlets?
Yeah! I think it’s really important to do something that is creative and that is not also your livelihood. I love music, but I think as artists we need to find something where you can be creative, but there’s no end goal or monetary or anything involved. I love to do pottery and I love to bake. I love to use my hands. It’s very meditative for me and those are just little things that I do for myself, because I think it’s so important for artists to find something that is that artistic outlet that they’re just doing solely to relax.

That’s really important. It kind of gives you some space to come back and be more inspired for writing new songs, I think.
Exactly. I do really think that mediums influence other mediums. I feel like as long as you’re in that creative muscle, it can really open up a different emotion or kind of energy and move you into writing something else.

You’re currently living in Nashville, so how is it like the music scene nowadays over there?
Yeah, I’ve been in Nashville for about two and a half years. The music scene is cool. It’s really surprising because when you think about Nashville, you automatically think country music, but there is so much more than that. There are some really wonderful country musicians, but there is punk rock, there’s such a wonderful soul community here and instrumental jazz. It’s really flourishing right now and there’s such a big group of people that are moving in every day. It’s a really wonderful community to be a part of and very happy to be here.