Earth Girls are one of those bands that you shouldn’t totally let get unnoticed. Based in Chicago, the trio creates such raw and infectious power pop tunes that are perfect for these sunny, dreamy days. Guitarist/vocalist Liz Panella talked with us about the band and their first album, Wanderlust.

Tell us a little bit about Earth Girls and how you got together to form the band.
Joey and I first played in a band together in 2011, right after I moved back to Chicago from Boston. Right before the move my old band Libyans played a show in Chicago and when I told some friends that I was moving back, we agreed to form a band on the spot. That band was called Embarrassed Teens and was comprised of me and Joey plus two other friends. Embarrassed Teens didn’t last long – I think we only played two shows – but it was really fun so a few months later Joey and I decided to start up again in the same style Embarrassed Teens had been playing. The initial lineup of Earth Girls was me on vocals and guitar, Joey on bass, and Jeff Rice on drums. This lineup played together for a little over two years and recorded the demo and the first seven inch on Grave Mistake and Drunken Sailor. When Jeff left the band, Joey switched to drums and we quickly recorded the second seven inch (released by Dirt Cult) and the LP. Wanderlust was actually written entirely in 2014, but recording and production delays pushed its release back several times. Earth Girls has had quite a few different people play bass and second guitar, so the core of the band is really me and Joey. Although I write all the music, he always helps me arrange and polish the songs. As a songwriter, it’s really nice to have someone you can trust to bounce ideas off of and reign in bad ideas. Joey really keeps me in check!

Dumb question! Why name the band Earth Girls?
There’s no good answer to this question; we just liked the sound of it! Funny enough, I never actually saw the movie Earth Girls Are Easy until long after we started the band!

Your music is just so damn catchy and raw and you combine perfectly sharp garage-rock with power pop melodies. What were your main references while shaping your sound?
Although we did have a couple of bands in mind as points of reference when we started, I’ve never tried to write songs according to the blueprint of another band or songwriter. I come from a musical family and from a very young age I’ve been a ravenous consumer of pop music. My mom raised me on British Invasion and I probably knew the words to every Beatles song by the time I was 8 years old. I also spent most of my childhood in Rockford, IL, home of Cheap Trick, so I was exposed to that sort of power pop very young as well. As a teenager in the late 90s I was really involved in the local music scene in northern Illinois and southern Wisconsin – Promise Ring, Smoking Popes, bands like that. Also around that time I discovered Chris Knox and Flying Nun Records, which has been a huge influence on my songwriting. And of course I love British punk and post-punk from the 70’s and 80’s – the Adverts and Dolly Mixture being my absolute favorites.

You’re about to release your first album, Wanderlust. All songs just go really well together with these vibrant tunes. How was it like the whole process of putting it together?
For most of 2013 and 2014, the band practiced a lot. Sometimes four or five times a week. I tried really hard to capture all the creative energy we were expending into a cohesive package. I spent many, many hours writing and rewriting the songs on the record. The music took about a year to write, but I always like to do the lyrics for a release at the same time. It took me about a month to write all the lyrics right before we recorded. 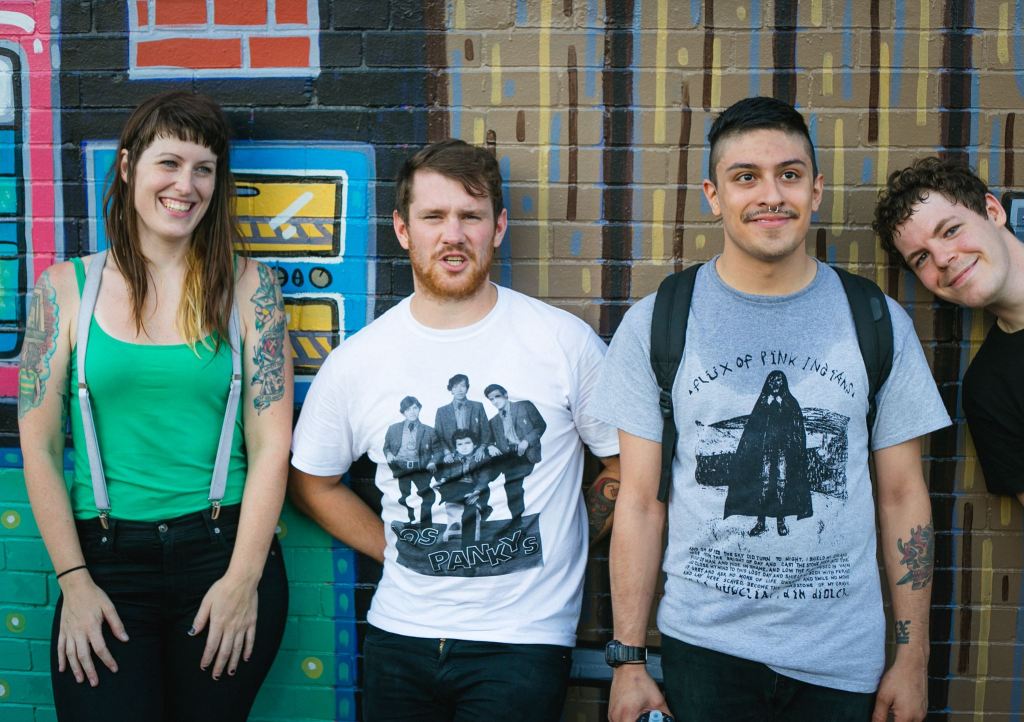 “Sometimes songs have a very obvious meaning that I’m not even aware of until they’re finished, which I think is very cool. I also really love the idea that a writer doesn’t have complete control over what they write.”

Liz, what inspires you the most while writing your lyrics, especially for Wanderlust?
I have a very stream of consciousness lyric writing process. I almost never sit down with a specific topic in mind when I write a song. Generally, a phrase or two will pop into my head based on the melody of the song and I’ll just keep writing as much as I can on that theme and then edit it all together. Sometimes songs have a very obvious meaning that I’m not even aware of until they’re finished, which I think is very cool. I also really love the idea that a writer doesn’t have complete control over what they write. I think that leaves a lot of space for the listener to create their own emotional and intellectual interpretation of a song.

I just love the album’s cover art! When was it taken and by whom?
Our friend Peter brought his camera to a show we played at Bric a Brac Records in Chicago and we spent the whole evening taking goofy photos inside and outside the store. The cover was taken outside the store. The mural in the background has since been painted over, I believe.

What does Wanderlust represent to you guys?
For me, it’s basically a personal journal of trying to figure out how to make the best out of life. I spent my 20s doing everything I was supposed to do – college, grad school, internships, getting a “real job” ad nauseum but in the end I felt totally screwed over by my own expectations of what adult life is supposed to be. So I guess the album represents feeling out of place and experimenting with how to stop that feeling. It’s not necessarily a literal Wanderlust. I didn’t leave my hometown during the whole period described by the record.

For us, this record is just perfect for these summer days. What do you love the most about this season? Or do you prefer another?
I live in a place with extreme weather – very cold winter and very hot and humid summer – and I love the different mental states that I associate with different seasons. Winter is the time to be introspective and process all the shit in your head, and summer is the time to socialize and make new friends and have new and fresh experiences. I love summer because it forces me to get out of the old routine and create a new “normal” if only temporarily.

What’s next for you guys after releasing your album?
I’m going to do a solo tour of the east coast and midwest US in late August because Joey is working in Japan right now and it doesn’t feel right playing with another drummer. When he gets back we’re going to do as much touring as we possible can, hopefully Japan, US, and Europe.

What do you love the most about playing live and being on the road?
Definitely meeting new people and getting away from daily routine. I have a huge problem with doing the same thing every day, so getting out of town on the road is always very refreshing.

What records or bands are you really into lately?
My current favorite band is Vacation out of Cincinnati. Their records are perfect fuzzy pop on speed and their live shows are even better. They’ve been touring a lot lately so everyone should definitely go check them out if you haven’t already.