Upon first listen to Baltimore hardcore band Sharptooth’s debut album Clever Girl, you can’t help to internalize all the political and social motifs that permeate through the lyrics sung by Lauren Kashan – the band’s lead vocalist. The hardcore scene has always had its roots in politics, but Sharptooth takes it to another much needed IN YOUR FACE level. There is no running away from the messages they want you to hear, to understand, to educate yourself on and have constructive conversations about. They hold nothing back when it comes to discussing today’s political climate, sexism, misogyny, the treatment of Black and Brown lives and everything else in-between, which is so refreshing to listen to from allies in a music scene that may often seem unwelcoming to those who don’t fit the paradigm.

From the snippet of the 2015 Baltimore Protests at the beginning of “Give’Em Hell Kid” to when Lauren shouts, “trapped in a memory that I can’t escape; too scared to admit I was raped” on “Can I Get a Hell No” gives you chills. These are just a few of the moments that sonically define the importance of Sharptooth’s debut album Clever Girl. Lauren took a moment to sit down with us to discuss signing to Pure Noise Records, Baltimore’s impact and the future of hardcore music.

Congratulations on signing to Pure Noise Records, a successful debut album and being on such a stacked bill. What’s it been like touring with legends like Anti-Flag?
Well, this is just day two! Everyone has been so nice and so welcoming and everybody has just made it very clear that we are on this tour because they wanted us to be there, which is just the best feeling in the world. So if they feel like we are doing something right, I’m like okay I feel good about what we are doing. And Stray From the Path are literally one of my favorite bands of all time, so the fact that they back us is just like FUCK YES!

Do you still get a bit nervous being on the stage and going up before such iconic band such as Anti-Flag?
Sure! I get nervous all the time. I am just a bundle of feelings always. I am never cool, calm and collected. Even like small shows and basement shows, I am getting up in front of people and I have a responsibility to be talking about certain things and giving them the best show.

Being from Baltimore, how has that city, with Ferguson nearby and 2015 Baltimore protests, inspired your songs and your political stance?
We wrote a song called “Give’Em Hell Kid” about specifically police brutality because winter of 2014 was when all that stuff was going down in Ferguson and the Michael Brown case. I just remember how angry that made me feel, that there is anybody walking around worried to just fucking go out and exist in the world because of the color of their skin. I personally believe that unless you are taking an active stance against it then apathy is just like the worst fucking thing you can do. Like saying it doesn’t affect me or it is not my problem, it’s like yeah but as human beings, we have a responsibility to each other and to look out for one another. So, I don’t know I was just watching how much the people were struggling and hurting from this, and then when everything happened with Freddie Gray and the Baltimore uprising. When you’re angry and hurt and in those feelings, you’re not sitting down thinking what is the most rational and logical way to express these feelings. People don’t get to police how people feel, especially in the face of such egregious oppression. 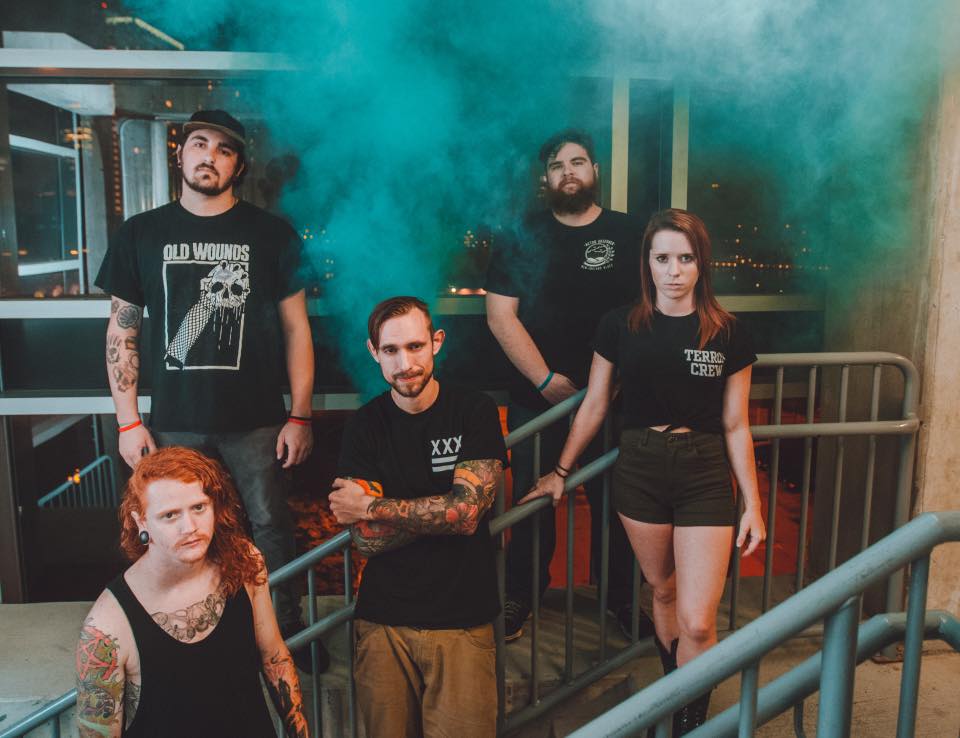 “When you’re angry and hurt and in those feelings, you’re not sitting down thinking what is the most rational and logical way to express these feelings. People don’t get to police how people feel, especially in the face of such egregious oppression.”

The one thing I love the most about your music is that is always politically charged and speaks towards truly marginalized groups of people and movements like Black Lives Matter. What inspired you and the band to take the music in this direction, knowing that the hardcore scene is mostly cis hetero white males?
People like to think that we live in a post-racial society and the last year has made it very clear that we do not. It’s up to people who aren’t necessarily those people [people of color] to confront our peers about it. It’s not just the job of Black people to have to explain to everyone else why shit isn’t okay. As a white person, I think it’s my responsibility to go talk to other white people because I do have the privilege of being more accessible to them.

Has the “scene” always been so welcoming to Sharptooth?
It’s has not always been easy. I feel like I carved out a place for myself in the Baltimore hardcore scene and metalcore about like 10 years ago, when I started going to heavy shows. It’s funny because I felt I needed to work twice as hard to feel accepted as other guys did. Every show I went to I moshed from the first band to the last band and nobody is gonna forget who the fuck I am. I do that because this is the music I am passionate about and expressing myself through being a crazy person at shows which made me feel better about existing in a world that is hard and painful to be in sometimes. When I first wanted to get into hardcore when I was like in high school, people would tell me “no clit in the pit” – that was a thing. *We discuss our age and how that phrase was very common when she was in high school* It was a very male-centric scene. It was pretty poisonous. I knew a lot of women who were involved in the hardcore scene at that time and they basically dropped out of hardcore because of that. They felt the culture was so toxic. I am very fortunate that I’ve been trying to do with Sharptooth for the last 3 years. It’s a much more socially aware landscape than it was. I think the great thing now is that so many more women and femmes feel embolden. We do fucking belong here and we are gona make sure you know it. I think the exciting thing is most of us aren’t scared anymore.

In most recent events, we have seen the meteoric rise of people speaking up for movements like Me Too and Times Up. Your song “Clever Girl” discusses fighting back, especially towards industry sexism and sexual assault, which is now more relevant than ever. As well as “Can I get a Hell No,” my personal favorite. Can you share how you are making your shows safe spaces for the women who come to see you?
We have a song called “No Sanctuary” and before that song, I usually talk about how this needs to be our sanctuary because out there we cannot rely on anybody else. This is all we have – music. We go here because we don’t fit in anywhere because nothing else makes sense.

Let’s talk about your song “Fuck Donald Trump.” Did you write this pre or post-election?
It was our joking working title. The real title that we actually put on the first release of the record was “Red Lies.” When we sent it the songs to Pure Noise, it accidentally had the old working title on it. We were like “oh by the way, the ‘Fuck Donald Trump’ thing you don’t have to worry about that. That isn’t the actual title.” [Pure Noise] was like, “No, we love it.” It was more supposed to be a broad-brush stroke about all the candidates.

We are still in the start of the year. Can you share what the band has in store for 2018?
A whole lot! Unfortunately we can’t share, but we are going to be very busy especially the summer.