The Soft Moon, aka Luis Vasquez, has battled and documented in music his emotions, insecurities and anxieties. Criminal is by far his most confessional and self-reflective work to date. Luis has laid everything into his songs and is quite inspiring how he’s not afraid to put them out to the world. We talked to Luis about his approach to music and how Berlin is a place that inspires him.

You recently played some live shows, which included Sacred Bones 10th Anniversary show in Los Angeles. How did that go? Have you played the new songs off the new album?
Yeah. We played the first single “Burn” off Criminal a couple of times, but I felt that it was maybe a bit too soon because we rushed into trying to learn it. We didn’t have that much time. This tour was kind of not too last minute but more or less minute than usual, just a couple months before. Normally a tour is booked like six months in advance and things like that.

You used to live in Oakland, but you’ve been living in Berlin for the past couple of years. What’s so special about it and which way it influences your music?
I came to Berlin mainly because I wanted to live in Europe and the fan base here is much larger than in the States. There’s more of a connection in Europe and I felt that Berlin was also kind of central for me, so whenever I have to go play festivals or go on a tour in Europe, it’s quite easy as a starting point. In terms of the connection, it’s funny because I moved here six years ago for the first time and I had a hard time dealing with the city. At that time I was dealing with depression and whatever I was going through at the time, and I felt like the city added more to that, so it was a little bit overwhelming. A few years later, I came back and now I’ve been here for three and a half years and it’s inspiring. I think it’s more of the energy that the city has that is quite inspiring. There are a lot of people that are very creative and have a lot of freedom to be creative, and so that kind of energy inspires me. It’s also not the prettiest city and it’s not so pretty post-war, you know? They had to rebuild the city right away and the weather is not the best. I guess that influences me in a way that it takes me inside myself even further.

Criminal is your fourth album and it’s really surprising how you let your most raw emotions flow throughout the whole album. Deeper was a much darker record than its predecessors, but Criminal takes darker to another level. What did inspire you this time around?
I would say this is probably my angriest album, which I think another level of darkness is anger. I’m still talking about the same and still expressing the same things that I always do, like my anxiety, my thoughts and emotions, but now there’s also a layer of anger. It gets frustrating, you know? All of this time I’m trying to get to a happy place in my life. It becomes too much after a while and then naturally it was just kind of frustrated, so there was a little bit more frustration and there was also more desperation. I’m like reaching in order to heal myself and now I’m talking about my father in one of the songs and things like that. It’s getting more personal – not more personal because it’s all personal, but more specific. Now I’m pointing out specific things and I think that’s just the main difference in this album.

Criminal is definitely a confessional work. This is probably your most self-reflective work to date. Can you elaborate more about your approach to this new album?
It was pretty similar to since even the first album. I kind of stuck with the same approach. It’s nothing glamorous. I’m still writing where I live. I write at home and also I rented like a little basement studio in the beginning when I first started writing. That was different. I actually rented a basement like a warehouse and it’s interesting because after about four months, I ended up just taking all my stuff out and bringing it back home. I guess it was just more comfortable writing in a home environment. And then I was flying to Italy over like the span of nine months. I was flying to Italy like once or twice a month to go to the studio and take my songs and further produce them, so that was pretty much the entire process.

On Deeper you were trying to find inner peace, but in Criminal you were seeking redemption. Did you find both peace and redemption after writing this new album?
I won’t know until I tour the album. I need the other half of the project to feel, so it always takes me a while when I write something and I go on tour. I need time to reflect and to see if I’ve changed or not.

Like you said before, anxiety is something that has been following you. It is something that a lot of people deal with, including myself. Is music something that helps you and allows you to handle it?
Actually it makes it worse to be honest. [laughs] Because it makes me think more. When I’m in the process of writing a song, I’m facing things and then the music is forcing me to look at a deeper and longer period of time. When I’m not writing, I’m thinking about the song and I’m like, “Why am I writing about this? Why is the song sounds so dark?” The way I’ve been battling anxiety is actually when I started going to the gym and try to care for myself. That’s the big thing I can get for myself.

I’m an anxious person as well and going to the gym and exercise helps me to release a little bit of the weight on my shoulders, you know what I mean?
Yeah! It helps a lot as well. Actually I went home to Los Angeles. I was there for three weeks, but I had a skateboard there and it helped a lot just because I was having fun and being physical. [laughs] It really helps. It’s interesting.

Music just makes it worse for you, right?
It makes me contemplate more. I mean, of course it’s rewarding because it’s my art and I love what I do and creating a song is the most insane feeling. It’s rewarding and cathartic, but it makes me dwell a little bit more because I’m learning about myself through my music. It makes me think more, but I guess in order to get better, you have to face things. It’s not easy to come under the concreteness kind of thing.

Overall, it’s a learning process. When I was preparing this interview, I was listening to your new album at the gym and it kind of gave me the fuel I needed to say motivated.
I have a few fans that have written me and they tell me that they go to the gym and they listen to my music there. There’s even been a few like personal trainers saying to me, “I use your music to train my clients.” It’s funny because I haven’t done it myself. I haven’t listened to my own music at the gym. [laughs] That’s pretty cool. 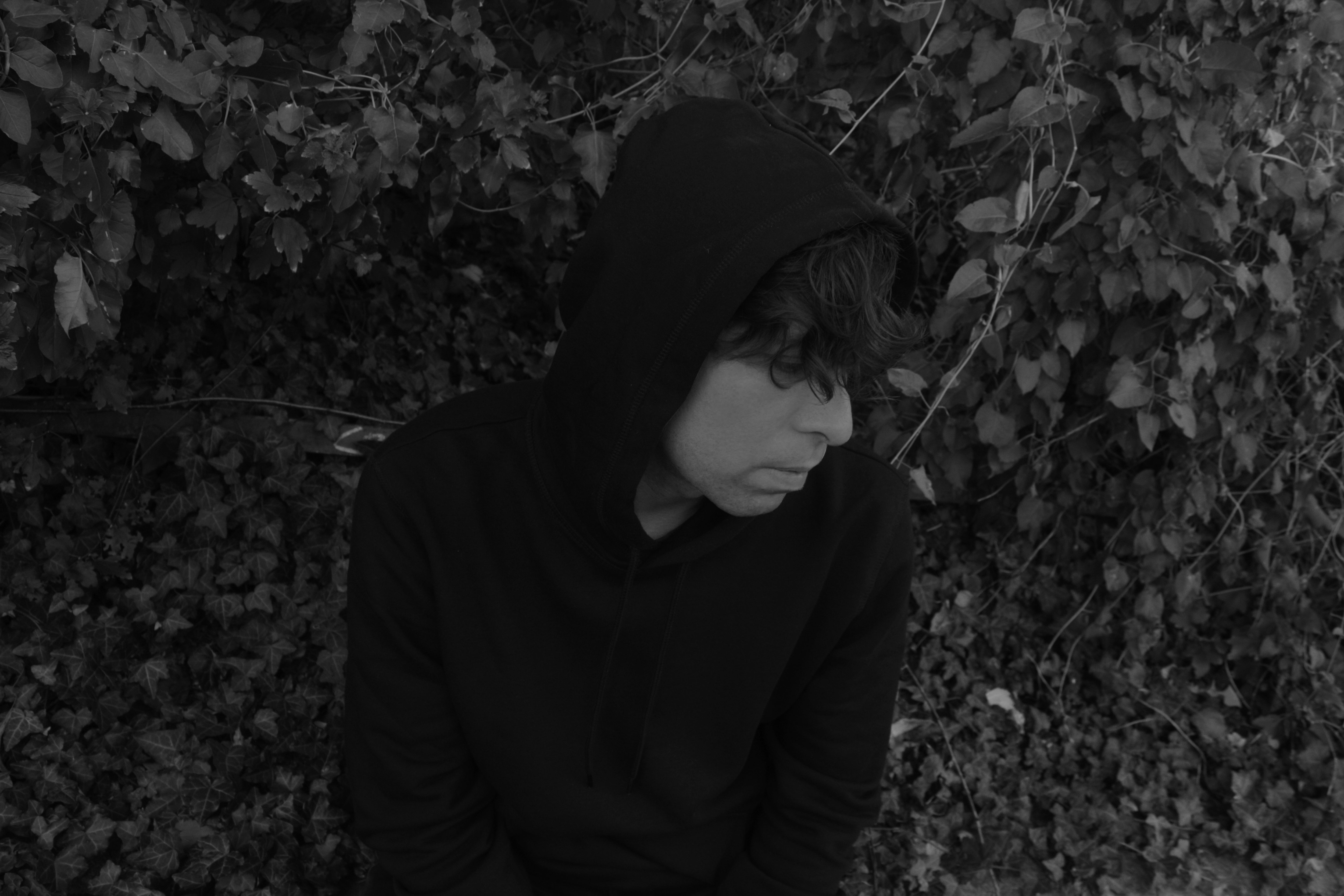 “I’m still talking about the same and still expressing the same things that I always do, like my anxiety, my thoughts and emotions, but now there’s also a layer of anger.”

Is there any track on the new album that made a mark on you while you were writing it?
One of my favorite tracks on the album is “Give Something”. That one made a mark on me because it was so honest. I’m being very honest with that. Another kind of revelation or an epiphany would be “Like A Father”. I wasn’t expecting to write about my dad who I’ve never met and that sort of happened naturally in the studio. That was a pretty interesting feeling and for me to be like, “Ok, I guess I’m ready to be a little bit more personal with my expressions for people and talk about something specific.”

You worked once again with Maurizio Baggio, who produced Deeper, at La Distilleria in Bassano Del Grappa, Italy. What can you tell me more about the recording sessions this time around?
I work really well with Maurizio and I think the main reason is because when I tour he’s also my sound engineer for the live shows. When I had first met him, it was to go on tour with me. He’s been with me so long and we’re also close to each other, because we’re in the van driving, you know? We’re traveling all over Europe, all over the world together actually, so we know a lot about each other and we feel very comfortable with each other. He has a strong understanding of my vision because he knows me so well, so therefore he was the right person for me to finally work with someone else on the last album in. Another thing about him is that if he ever has an idea, it’s usually pretty cool. I can kind of sit back if he has an idea because it’s usually something that I like, that’s another cool factor with him.

You have signed to Sacred Bones to release the new album. How did that come to be?
After, I was ready to move to a different label. I felt that I was using the connection with Captured Tracks and the direction that they were going ever since Mac DeMarco, they kind of shifted a little bit because of his success. I started to feel more and more like an outsider on the label and I felt like the fan base of the record label were going to the label looking for more music like Mac DeMarco. I just didn’t really feel right and so I was looking for labels and then Sacred Bones was excited about the new record and I’ve always been a big fan. Actually, I’ve always felt more of connection to Sacred Bones and I’ve always had my eye on that label. It just finally happened.

There’s something quite cinematic on your music, it feels like a soundtrack. Have you ever thought on writing a soundtrack for a film?
Yeah, actually that’s one of my main goals. After touring Criminal, I’m going to start to kind of go into that direction and pursue that. I would love to be involved in scoring film. I just feel like I would be good at that stuff. Like you said, my music is very cinematic and I do that on purpose, so I think that’s my secret weapon with my music. That’s my style, the atmosphere and cinematography within sound.

Is there a specific film genre that you are more into?
Anything like sci-fi post-apocalyptic. I would love to do like thriller slasher films, it would be really cool.

Before you started to make music, you were a graphic designer. Do you still work on stuff related to that?
Yeah. All the art that you see is all me. All The Soft Moon releases, all the t-shirt graphics, I still create everything and that’s pretty much all I do with graphics now. I don’t do anything else. I just do graphics for my own project.