The city of brotherly love has welcomed a new band to their endless alumni. Debuting their album, Burden Piece via Topshelf Records, Clique have been cutting the standard of a typical melodic rock band. We had the chance to speak with Travis Arterburn (Bass) and Tom Anthony (Drums) about the band’s formation and the creative road that became Burden Piece.

Your latest album, Burden Piece has a very unique, rough edge to it. How was the recording process and how do you feel the record stands out?
Travis: I’m not really sure what you mean about the rough edge, but that could be because I’m pretty close to the album. I engineered it myself over the course of 8 days at the Headroom last November. My production style isn’t super polished or anything so that could be what you’re referring to. I also don’t like to use very much reverb. Whatever. Anyway, the studio experience was pretty typical. We drank beer, hung out, and stayed up late. Some Adderall here and there. We’d already demoed like 8 of the songs, so we pretty much knew them back and forth by the time we went in. You can check the music video for “Top Field” if you want to see us fucking around in the studio. I mixed the record in my apartment. I took too long and started driving myself a little crazy. A couple of weeks into the mix I got fired from my job for sleeping three hours into my shift after a particularly late night at a party at the Headroom (of all places). They had some moonshine in a spray bottle. After getting the boot, I ended up sitting around my apartment all day with the TV on mute making minute changes to the mixes. I spent like a month and a half working on it. I kept showing my girlfriend new mixes and she couldn’t tell the difference. Eventually I just said “Fuck it!” and sent it off to mastering. As far as the record standing out, I typically try to be as straightforward as possible with recording. I think that gels with our musical style well. It’s a pretty no-frills album that let the songs speak for themselves.

Which track on Burden Piece means the most to you, and why?
Travis: For me it is “Boundaries”. It’s the best song I’ve ever written and I really like how the production turned out. I can’t speak for the other guys though. There’s some pretty heavy shit on this album that can mean different things to different people.
Tom: “Saline” sticks out for me. I had a rough skeleton for the song and I was really nervous to show to everyone ‘cause it was the first song I brought to the band. But almost instantly Trav and Brandon added these amazing riffs that took the song to another level. Then PJ took the original guitar part I had and blew it completely out of the water. The recording turned out great and to me it highlights what everyone in our band brings to the table.

What’s the typical songwriting process for Clique?
Travis: The songwriting process for this record was different than any band I’ve ever been in. All four of us would bring in skeletons of songs and then we’d expand upon them at practice or send demos back and forth. Tom wrote the main instrumental for “Usage” and I wrote the vocals. Brandon wrote the main instrumental for “Separate” and Tom wrote the vocals. I wrote the main instrumental for “Athlet” and PJ wrote the vocals. That kind of stuff. We all also have songs that were primarily written by one person too. I guess it can be a bit of a clusterfuck. It’s a lot of work but very creatively satisfying. There is no real ‘band leader’ so it’s surprising to me that four different songwriters all figured out a cohesive sound without discussing what we were going for. Apparently, we’re on the same wavelength. I guess when you smash ideas together that way it has to come out with some sort of distinct style.

Many bands have an everlasting love for their hometown. Coming from Philadelphia, how do you feel about the city, the music scene, and what has it done for you guys?
Travis: Philly is great and Philly sucks. There are so many bands and so many places to play. There is a huge community within the scene that we exist in. People have been very supportive of our band which we really appreciate. It’s easily commutable by bike and relatively affordable. Those things are cool. It’s also full of asshole drivers and trash. A lot of people get pretty bummed out and downtrodden here. Us included. Those things suck. I don’t know. I imagine it’s pretty normal to feel conflicted about a place you’ve lived in for a while.

You’ve referred to your lyrics in the past as “raw”. Would you mind elaborating on that?
Travis: I doubt that we’ve ever referred to our own lyrics as raw. I’d bet that someone else has, though. There are four contributing lyricists in this band now so it’s hard to say. I think we try to write honestly and that might translate to raw. I guess we’re just not particularly happy people.
Tom: I don’t know if they are raw. I won’t speak for everyone else, but I tend to hide behind metaphors and double-meanings because I’m not self-assured enough to just come out and say what I think or how I feel. The other guys are better at that. 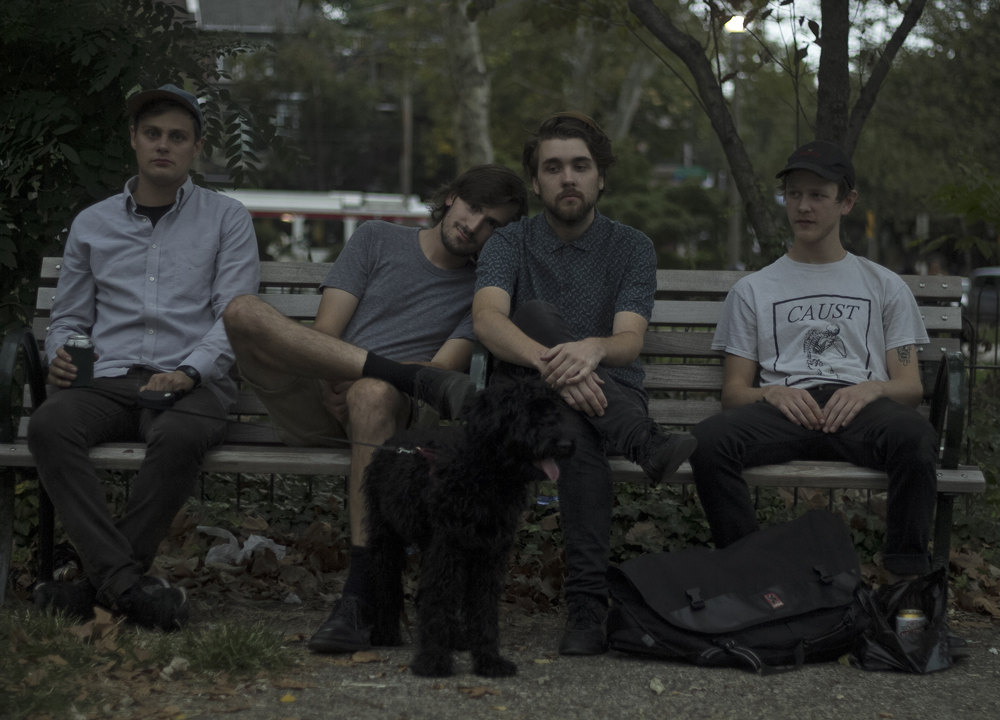 “As far as the record standing out – I typically try to be as straightforward as possible with recording. I think that gels with our musical style well. It’s a pretty no-frills album that lets the songs speak for themselves.”

Musically, Burden Piece definitely has its own feel. Who influenced your sound the most for this record?
Travis: We draw upon a lot of influences both individually and collectively. Some groups that I know to be particularly influential to the sound of this band are Bedhead, Pedro the Lion, Duster, Pinback, and Modest Mouse. We’ve also been listening to a lot of early-2000s white studded belt metalcore on the road lately.

What’s the reason behind the album’s title Burden Piece?
Travis: It comes from a line in the first track. We were initially calling the song “Burden Piece”, but we decided to use the title for the record instead. In my mind it works on a few levels. I think a lot of these songs are pretty thematically depressing and heavy so you could refer to the record as a whole as a ‘Burden Piece’. It could also be referring to us as individuals being a burden on those around us. We never discussed the meaning explicitly with each other, but it felt right.
Tom: The line in “Worth” goes, “I won’t be your burden piece.” There’s no deep meaning to it. Originally it was just “I won’t be your burden,” but I needed an extra syllable to finish the line. When I sent the demo to the guys I called it “Burden Piece” and I think Trav very quickly was like “That’s a great title.” And when we needed a name for the album, I think we all thought it was appropriate.

In the past you’ve mentioned that before Clique, the majority of the members were playing in other groups. What brought you all together and what was the driving force to create Clique?
Travis: PJ, Tom and I have all been playing in bands in Philly for 5 or 6 years or something. We came up in the same scene around the same time so our bands were playing together and we were all friends. I’ve worked on recordings for a bunch of them too. When PJ’s bands started to dissolve, he and Brandon, who were roommates, started writing songs together and performing them in acoustic. I heard a few of the demos and thought they were really good. So I asked PJ if he might be interested in putting a band together. He said yes and I ended up coming over and writing bass parts over a few jams. We didn’t have a drummer and I asked Tom if he would do it. I think he was trying to get out of playing drums in bands and he reluctantly agreed – he’s a really talented multi-instrumentalist and had already been drumming in a couple projects. Things came together pretty quickly after that.
Tom: I was definitely trying to get out of playing drums, but I couldn’t pass up the opportunity to play with Trav and PJ. Ted Nguyent and Girl Scouts were two of my favorite bands in the city, so it was a no brainer to say “Yes!” when Trav asked me. I’ve never enjoyed playing the drums more than I do now so I’ve got no complaints.

Do you guys have any tours/shows scheduled for the near-distant future?
Travis: We just played our record release show and a show with Into It. Over It. for Northside Festival in Brooklyn. Those are our last two scheduled shows for a while. We have a bunch of new material to work on. Plus, we are broke idiots and wanna try and get ourselves on track so that we can start being a real band and maybe tour later this year.

If you could tour with any group, who would you choose, and why?
Travis: That’s a tough question. There are a ton of bands we’re into that we’d love to tour with. I guess if I have to say something I’d say Pinback. Maybe The New Year? Are they gonna tour ever? David Bazan would be pretty cool. Our friends in Hop Along and Alex G are touring with Built to Spill. That’s pretty wild.

Thinking back to all the shows you’ve played before, what incident/memory sticks out the most to you?
Travis: We got to play the final Glocca Morra show at the first Unitarian Church. I really love them and was stoked to play that show. I’ve been going to gigs at the church since I first moved to Philly in 2009. Playing on the stage for the first time was pretty surreal.