There was a time when Chelsea Wolfe could have, perhaps erroneously, been called a folk singer, but with each new release she has moved into a more introspective and sonically devastating realm, reaching a crashing upsurge on Hiss Spun. It moves further into noise and alt-rock territories than ever before yet once again it retains a natural kinship with her oeuvre, coal-black and uncanny in its ability to cut straight to the heart of anyone who cares to listen. We caught up with Chelsea to examine the mind and soul of this powerful work.

Congratulations on Hiss Spun. It’s an eerily powerful album, and it feels like an incredibly weighty one too – a lot of doom and industrial elements in there. You’ve always been fondly received by the doom community so does this feel like an album for them, in a sense?
Of course I want those who already follow my music to enjoy the album, but I try to write without anyone else’s voice in my head.

One thing the album really highlights is the dual (duelling?) senses of strength and vulnerability that have always seemed present within your work. How has the balance between these two forces shifted from your beginnings up to now?
That contrast has been within me from the beginning. I was haunted by macro vs. micro from a very young age.

It’s a very evocative album title – there’s something quite obtuse yet animalistic about it. Where did the phrase come from and how does it represent the sound that you were trying to capture here?
Hiss is the white noise, the life force you’re addicted to. Spun is the sickening feeling you get from the withdrawals.

Another thing with Hiss Spun is that it feels like more of an ensemble work than previous albums. What was the writing process like here and was there any shift away from how you typically work?
It was a culmination of important musicians in my life. Many of the songs came about from us just jamming together.

You recorded the album in Salem, which is certainly a far cry from Los Angeles. How did you find the experience of working there and do you feel the change in weather and scenery played any part in the album’s tone?
We recorded in Salem in the dead of winter, even got snowed in at one point. There is a sense of the cold outside with the warm interior. Jess recorded drums in a concrete dungeon room in the basement of the studio. Two floors up, I’d work on vocals, set to the hiss and bang of the radiators. 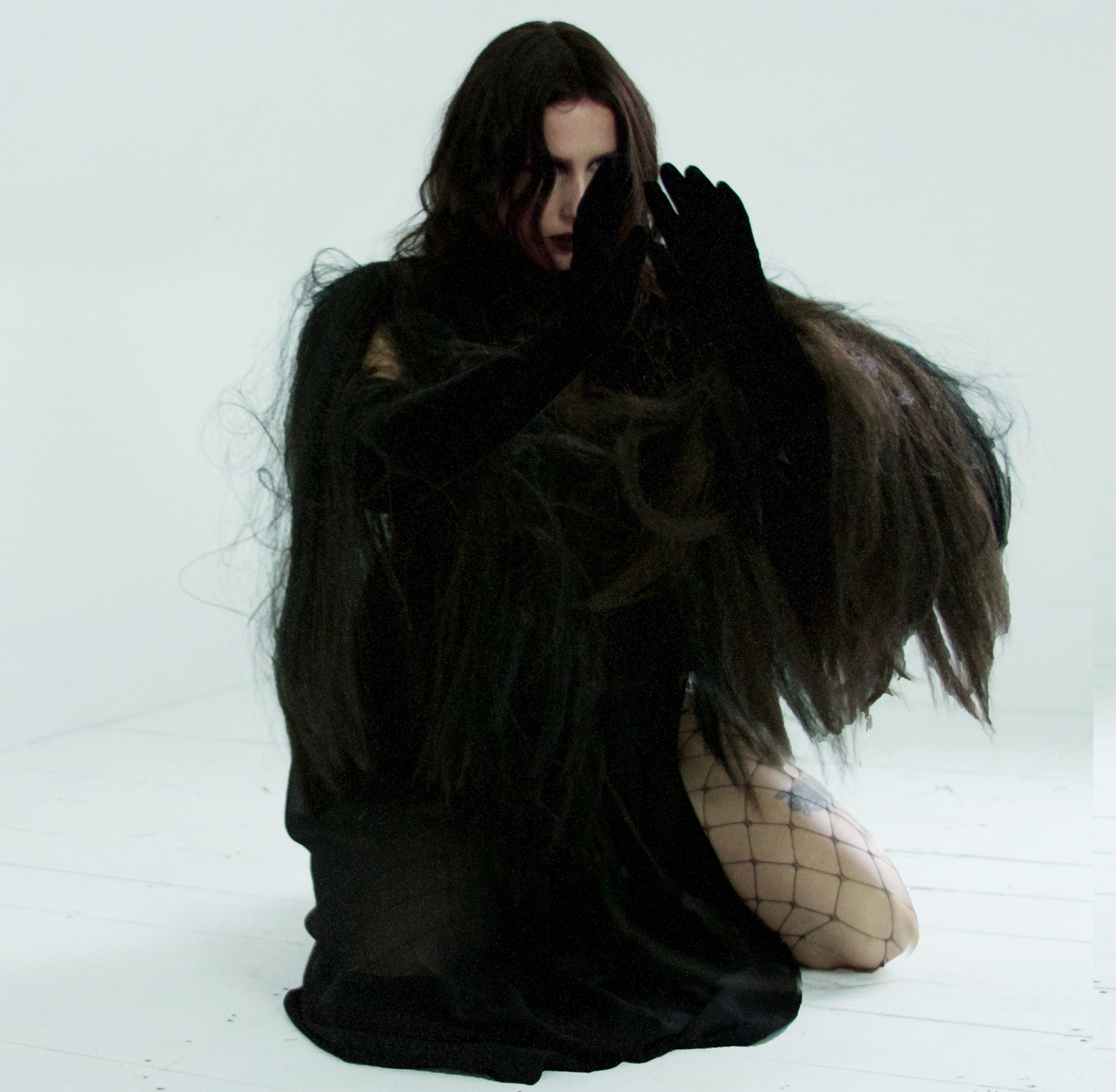 “Hiss is the white noise, the life force you’re addicted to. Spun is the sickening feeling you get from the withdrawals.”

The last time I spoke to you, I asked about some of the designers and couturiers that you’d worked with, so I’ll fire that back again. Who have you been working with lately, and how would you describe your own tastes in fashion, art and photography?
I oscillate between something raw, vulnerable, and primitive to something modern, strong, and futuristic. I’m always trying to reconcile those two sides of myself. Sometimes I’ll lean towards one to the extreme, but most of the time I fuse them together. Lately I’ve been buying less clothing, instead just saving for timeless pieces by AF Vandevorst, Ann Demeulemeester, Sisters of the Black Moon, and Ovate. I’m reuniting with my friend and photographer Mary Gebhardt soon, she’ll join us for a few days on tour. She took some of my earliest photos as an artist, and turned me on to Nan Goldin, who has since been a big influence for me.

You’ve stated that you were quite uncomfortable with your first recordings and that you felt pushed into releasing those songs. Has your opinion of that material changed over the years and do you feel there is anything there that is worth reviving?
No, let the dead rest.

I really loved the Rudimentary Peni covers EP that you did for Latitudes a few years back. Are there any other artists out there that are close enough to your heart that you feel you could give similar treatment?
I’ve done some recordings of Townes Van Zandt songs. I have a deep affinity for him. I might release those someday.

There’s a strong sense within your music of the voice, not just as a lyrical and narrative tool, but also as an instrument in and of itself. Is this the reason for your use of vocal distortion or is there another purpose at work?
Lyrics are very important to me, but so is expressing a more feral, spontaneous side of myself where I allow my voice to create sound layers on its own accord.

I find the social and religious undertones of your music as intriguing as the musical and literary ones. Are there any such vibes occurring within Hiss Spun that we should know about?
Walt Whitman, my own insomnia and memories.

Something of an open question but what is your primary motivator as an artist and musician? What spurs you to create what you do with the frequency that you do?
Something innate. An addiction to the quest for something holy. And of course to connect with others.