Hailing from Norway, but living in Berlin, Kari Jahnsen – aka Farao – is an ambitious and bold artist, her music conveys her most personal experiences with an incredible mixture of sounds and tones. With Soviet Disco as one of her main influences, her new album Pure-O is a keen and introspective effort. We caught up with Kari about her origins and how was it like the writing for the new album.

Let’s talk a little bit about you. You were born in Ulnes, Norway. How was the music scene in your hometown like?
I grew up in a really small place where basically there was no music scene. There were like 500 people living there and that was close to a tiny little town with a few thousand people and there was a nonexisting music scene. [laughs] I was basically just like in my room playing guitar and the drums a little bit. Just listening to a lot of music by myself until I moved away when I was 19. I’m still a solo musician because up until the age of 19 I was doing stuff by myself and I kind of got used to doing it that way.

Which bands or records were a reference to you when you started making your own music?
I would say the first album I ever bought on the CD was The Miseducation of Lauryn Hill. It must be one of the albums I’ve listened to the most in my life. Also in terms of singing, I’m mainly a vocalist and Lauren Hill is maybe one of my favorite vocalists. Her voice is just insane, so beautiful, inspiring and technically amazing as well. I had been practicing a lot of singing to that album. But there are other albums like TLC’s FanMail was a big one; Janet Jackson’s The Velvet Rope, I listened to that a lot. I still listen to all of these albums. They’re great.

Where did you move to when you were 19?
I moved to Liverpool, then I went back to Oslo for a while and then I went to London. I was back and forth between the UK and Norway, and then I ended up in London for five years and then I moved to Berlin where I live now.

What did you take from living in Berlin for your music?
I think the most important thing that Berlin has given me is mental space and time. It’s a really cheap city and there’s a lot of space. It’s really huge and this physical aspect really affected my songwriting as well, just having so much space around me to be able to think, to be able to focus on what I wanted to the new album to sound like. Compared to London where I used to live before, there’s so much more pressure from the industry and also economically it’s much harder and you have to live in a tiny apartment and record music on your bed, but there’s something to learn from that as well. Living in Berlin and being able to have my own studio has been really important for me.

Your first album, Till It’s All Forgotten [2015], was written in London, right?
Yes. I feel like I’ve changed so much between these two albums. I’m not a big fan of releasing similar music. When artists do that and they released album after album and it kind of sounds the same, I get incredibly bored. It was really important to me to reinvent myself and I think I will always be like that between releases. I wanted to find a new persona in a way or a new aspect of myself that I hadn’t explored yet, so I feel like Pure-O is really different. It’s much more dancy and a bit more upbeat, much more R&B and disco at times. Singing wise, I have adapted much more of the stuff I used to listen to when I was young.

Pure-O is just a brilliant and mesmerizing album. You combine vintage synths, harps, minimalism, disco and R&B. Everything just fits perfectly well, it’s a really catchy and danceable record. What inspired you while writing these new songs?
A couple of years before when I started writing the album, I was going through a physical and mental burnout. I just had been going in a very fast pace and I couldn’t do it anymore. I was going through a pretty rough period where I had to relax and it felt very hard for me to adjust my pace that much. I was just at home for months just focusing on myself. I was meditating, I was doing yoga and I was listening to a lot of new age music. I was kind of forced into this introspective place and in music as well, especially new age is transcendent like Laraaji for example, who is a new age musician. I listened to a lot of that, a lot of Terry Riley as well and that affected me a lot. I was meditating and it really forced me into a new aspect of my consciousness basically. 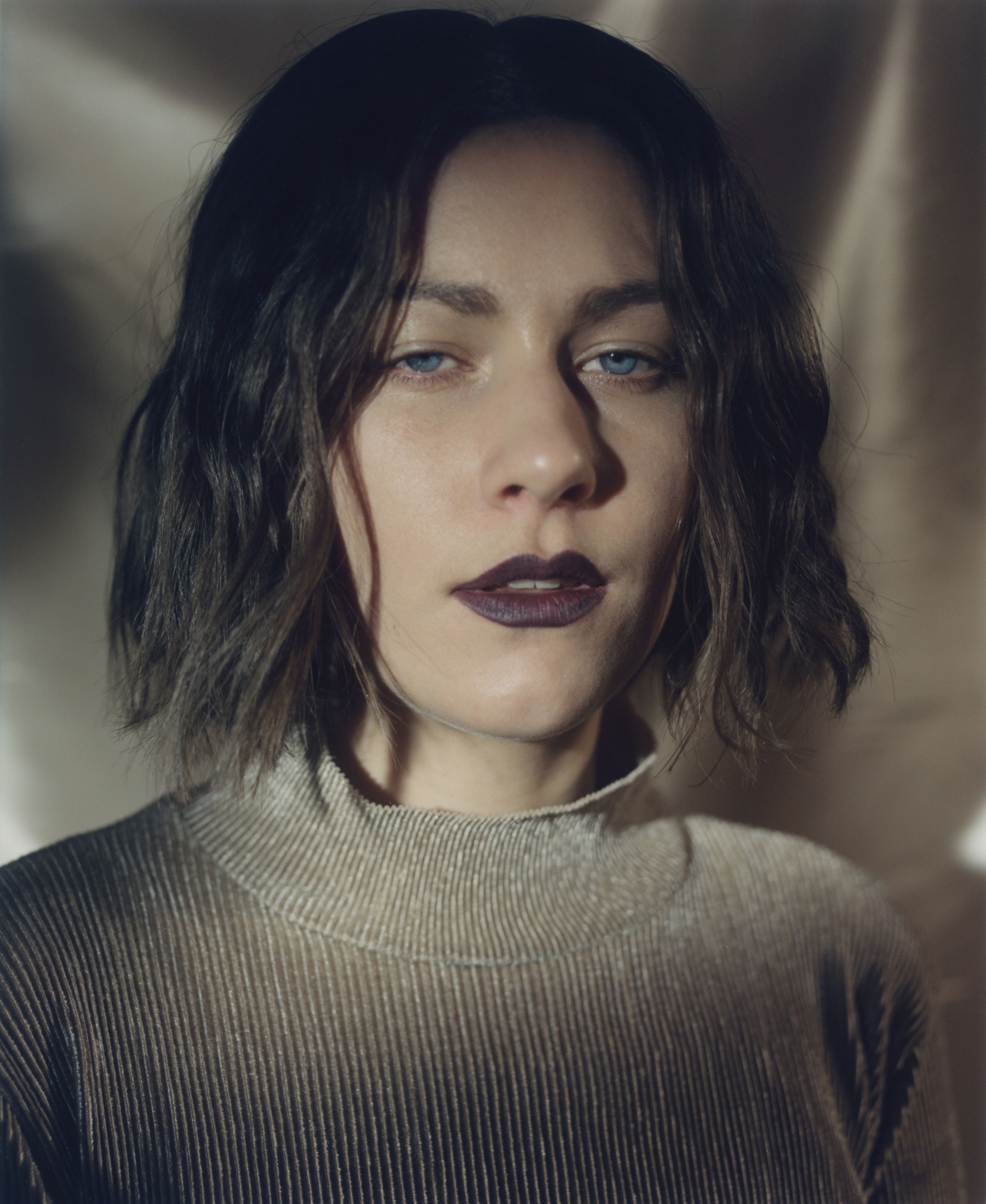 “It was really important to me to reinvent myself and I think I will always be like that between releases. I wanted to find a new persona in a way or a new aspect of myself that I hadn’t explored yet, so I feel like Pure-O is really different.”

You described the content of your new album as “the curious dichotomy between beauty and destructiveness in sex and relationships”. Can you elaborate more on that?
For me being involved with other people, either romantic or non romantic relationships, I’ve had this tendency to have a very polarized view of what works and what doesn’t. I mean if it’s going well and everything is beautiful, then that’s great, but as long as a little minor obstacle comes in my way, I’ve had a tendency to end up in a very dark place. I haven’t really been able to combine being in a relationship that’s also beautiful and has certain negative sides as well. That’s been incredibly hard for me to be able to live with good and bad at the same time and accepted it can actually exist side by side. It doesn’t have to be one or the other. I’ve been writing a lot about that basically as a way of trying to teach myself how to accept this. Just having both good and bad at the same time in my life has been incredibly difficult for me at times. I’m just a very polarized person and a lot of this album is me writing it to myself.

What led you to naming the album as Pure-O?
Actually, it’s a type of OCD. It’s an Obsessive-Compulsive Disorder. It’s like someone has to turn off the lights 17 times before they leave the room, otherwise something bad will happen. Pure-O is a type of OCD that you won’t be able to notice in people. It’s just basically intrusive thoughts coming in at undesirable times and I came across this online. I read an article about it. I was reading about it and I realized that this is something I’ve had my whole life. I had no idea it was even a thing because I was just so used of being this way. I had no idea and I wasn’t like looking for a diagnosis at all. I just found it randomly. I found this article and I recognized so many of the description of it. I just thought it was really nice title for the album.

The song “Lula Loves You” and its video is based on one of your favourite movies, Wild At Heart by David Lynch. Tell us about the concept of the song and video.
I love the scene when the Good Witch played by Sheryl Lee from Twin Peaks. She appears and says to Sailor (Nicolas Cage) that he shouldn’t give up even though things are going horribly wrong. There’s this hopefulness in a really sad situation about what we talked about earlier that I could really relate to when I watched the movie and I was in a similar situation myself. The phrase that she says “Don’t turn away from love” really stuck with me and I started playing around with it for the song. I needed to sing it to myself to be convinced to keep on trying in a situation that I was in at the time. I was just really inspired by that and it really helped me through a difficult period. It brought hope, which I wanted to bring to other people through the song.

That’s amazing. I really loved the video and it was all made by yourself, right?
Yeah, I just made it with my friend Tyler in my studio on a weekend. I have another video coming out soon, but that’s made by a different director. I really had a lot of fun making it. I think I will do more at some point.

It’s really great that you own a studio and to be able to record your music whenever you want to, so how was recording this album there like?
It was great. It was super relaxing. That’s the other thing about Berlin. When you can afford to have your own place, you don’t have to go to expensive studio and spend all of your savings on 10 days. You have only those 10 days to record all of your ideas and you don’t have time. When I recorded this album, I spent a year and a half to two years from beginning to end. I had so much time to just leave it for a little while. If I felt stuck or confused with what I wanted, I could just stop working on it for a week and then come back with a clear mind. I feel like that’s really important for me to not feel this time pressure. Also of course, it was all my own equipment that I know how to use very well and it was in my own studio and I wasn’t interrupted by anyone or anything. It was super peaceful and really relaxing. I think being able to relax when you record is really important. I’ve been in recording situations before where I’ve felt really stressed and insecure because of time pressure or maybe because of the people I’ve been working with. It didn’t bring good results, so doing it myself on my own pace has really brought something really good to the music.