Slaughter Beach, Dog started as a solo project for Jake Ewald – best known for his work on Modern Baseball – to get through a writer’s block. Now that Modern Baseball took a break, Jake is more focused expanding his writing and sound in his project. With a new album Birdie to be released very soon, we talked with Jake about what he’s been up and what this album represents for him.

Slaughter Beach, Dog started as your side project aside from Modern Baseball in 2015. What did motivate you to start this project?
I originally started it as something to overcome a writer’s block that I was having. I started doing it with the intention to write songs about fictional scenarios and it was something that I’ve never done before and that’s how I wrote our first album, Welcome [2016]. After that I’ve kind of got me out of my writing punk and I was able to just go back to writing normal but also keeping some of the fictional scenarios and doing a mishmash of everything. It kind of started as a songwriting exercise on the side. I started right before Modern Baseball released Holy Ghost, like the summer before.

Out of curiosity, why naming your project as Slaughter Beach, Dog?
[laughs] I live in Philadelphia and my parents live in Delaware. There’s this town in Delaware on the way to my parents’ house called Slaughter Beach and I thought that was a really cool band name, but when I started actually writing the songs and decided I was going to put out a record, I googled the name to see if anybody else had it and I found out there is a band in Denmark called Slaughter Beach and so I just added Dog on the end. I was hoping that one day that they would just break up so I could drop the Dog, but I’m kind of attached to the Dog now. [laughs]

Are you a dog lover?
Hum, dogs are okay. [laughs] But I say dog a lot, like in a friendly way, so I think that’s more where it came from.

Earlier this year, your band Modern Baseball announced that you were taking a break after releasing your amazing record, Holy Ghost. What led you guys to that decision?
We were just kind of burned out. We were doing a lot of touring ever since we started playing. We started doing it after college and we were just constantly on tour and trying to finish school in between, and once we got out of school, we were on the road even more and we never took any time to figure out what we actually wanted from the band or from being musicians. We just went full blast all the time and it eventually caught up to us and it took a lot of us. We decided that the healthiest thing to do would be just taking some time off to figure out what each one want individually and work on our friendship, work on our relationship at home, because the band kind of sucked up all of our whole lives, so it was really a need that we had. It’s such an incredible experience travelling the world and making music, but at the same time there was a lot of stuff that were lacking at home that we weren’t thinking about. It was a really personal decision for all of us.

What has everyone in Modern Baseball been up to since the break?
I’m doing Slaughter Beach, Dog. Sean [Huber, drummer] is focusing more on his project Steady Hands. Brandon [Lukens, vocalist/guitarist] is doing an acoustic tour in the States, just going by himself and his friend Jeff. Ian [Farmer, bassist] is doing a lot of work in the studio and I’m also doing a lot of studio work. Ian and I run this studio in Philadelphia called The Metal Shop and we record a lot of bands there. We also recorded Slaughter Beach, Dog record there and so that’s where we spend most of our time.

Did you see this hiatus as a opportunity for you to focus more on Slaughter Beach, Dog?
I guess I didn’t see it that way originally, but it kind of happened by accident because I was at home for a long period of time and we didn’t have any tours to go on. Any time I had nothing to do, I just ended up writing music and recording it. I had a bunch of songs on the side and I just decided to go into the studio with Ian and record them, now we’re sending them out to the world. It kind of worked out nicely. 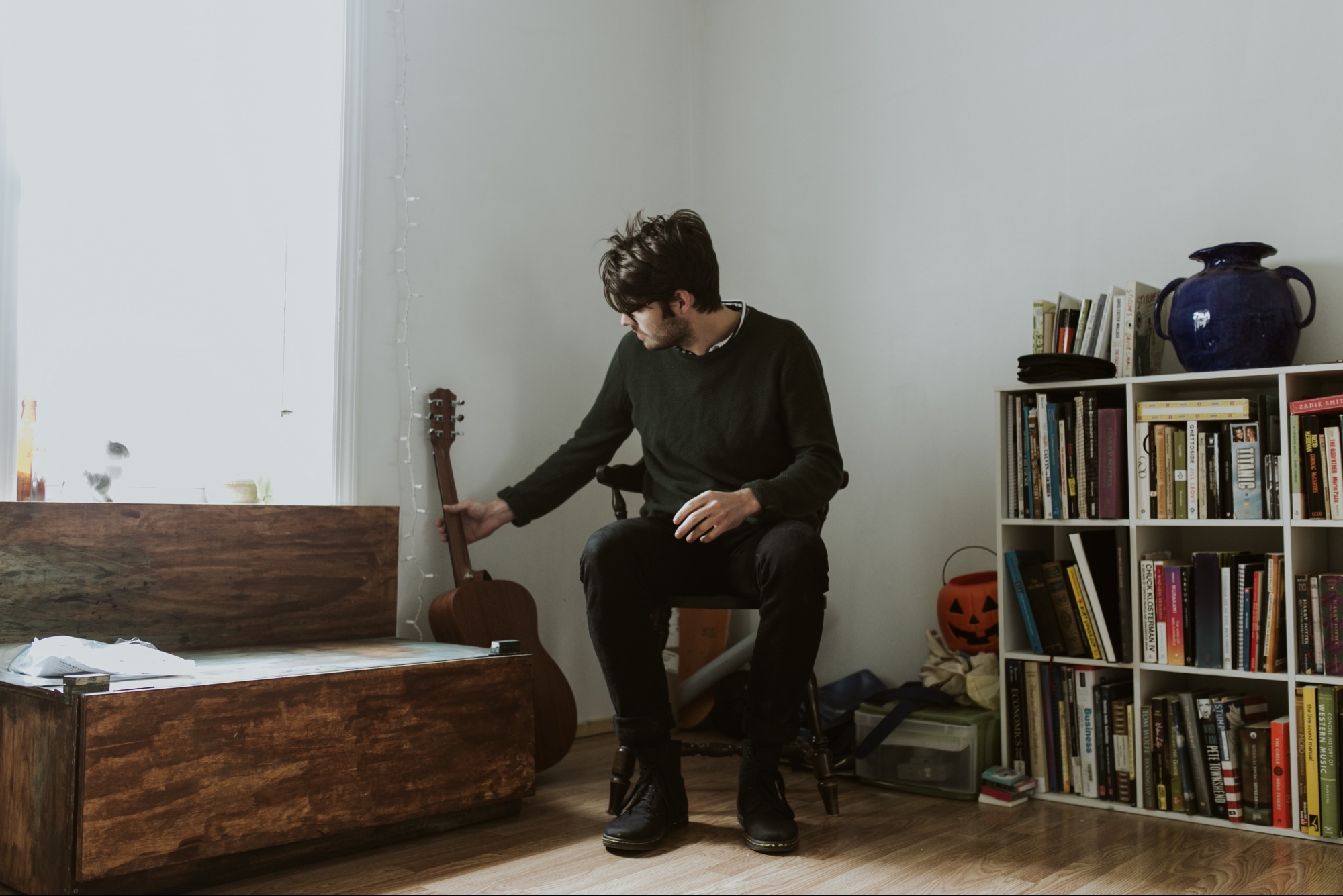 “I just felt really very relaxed and at peace, so the songs had this really good energy going where I feel all of them have a more relaxed intimacy and that kind of came from me finally slowing down and getting a little more center.”

For this upcoming album, you weren’t having a writer’s block, right?
Yeah! It was probably the less blocked I’ve ever been. [laughs] I had written a lot of the songs while Modern Baseball had been on tour or in between tours and I was just kind of a really great write period, so I had a bunch of songs. I put out some of them on an EP called Motorcycle.jpg that we put out this summer and I put the rest on the album Birdie that we’re gonna put out in the fall.

You have already released under Slaughter Beach, Dog name an album titled Welcome (2016) and most recently the Motorcycle.jpg EP, and now you’re about to release a new album, Birdie, which you expand your songwriting and is much more intimate. What can you tell me about the writing approach for this one?
I think finishing up the songs and recording them was when Modern Baseball were starting to slow down and take a break. I just felt really very relaxed and at peace, so they had this really good energy going where I feel all the songs have a more relaxed intimacy and that kind of came from me finally slowing down and getting a little more center. Even in the studio when I was recording it, I just came in and I had the songs written. Ian recorded and produced them and I played all the instruments, so for two weeks it was just me and Ian together in a room working on these songs and it was just so relaxed. We’ve been recording for years now and so we’re really comfortable working with each other. It was the perfect environment for the songs.

With Birdie, there’s more acoustic moment with a folk and country vibe to it. What inspired you to go more on that music direction?
I think a big part of that were two things. One of the things was that I started listening to more bands that sounded like that. I think probably as Modern Baseball started to playing bigger and louder shows I kind of got more into quitter and softer music, and the other thing was that probably a year ago I never had a really nice acoustic guitar before and I always write on an acoustic guitar, so I decided I was gonna treat myself and buy this nice smaller travel guitar. It was like a smaller instrument and so it wasn’t that loud and that time I was living at my friend’s basement but I didn’t want to be that loud anyway, but it kind of got me to the habit of singing a little quieter and with my guitar player came more attention to the little details of my playing as opposed to trying to play loud and fast. It was kind of a combination of those things into this kind of style.

You have announced a headlining tour this fall with support from Shannen Moser and you will also be playing solo in the UK for the first time this September. What can people expect from a Slaughter Beach, Dog live show?
It’s a lot of fun. It’s just a four-piece band. I play guitar, slide guitar and a little bit of keyboard. Ian plays bass, our friend Joe plays drums and our friend Nick plays electric guitar and acoustic guitar. One of my favorite things so far about playing these newer songs is that we do a lot of variation within the sets. We play really quieter acoustic songs where Nick’s playing acoustic guitar and I’m just playing slide guitar, but we also do really loud rock songs where we’re all playing electric guitars. It’s really neat because we get to go through a whole different ray of emotions during one set and we practice a lot to make sure that we connect all the dynamics. It’s really fun to do a really wide range of songs in one set. That’s probably what I’m most into right now.