Laura Stevenson is talented and spontaneous, and her new album Cocksure is a proof of that: a collection of fun and rip-roaring rock and roll songs. We talked with Laura about being a solo artist and how the new album is a new step forward.

From your time on Bomb The Music Industry, what did you take away from being in the band to making your own solo project?
I learned how to tour – booking shows with friends’ bands in other cities and then booking them shows in NY when they came through, – how to work with other musicians, how to teach people your songs and let them explore their personal interpretations of them, how to stay positive, I learned everything. It was an awesome experience.

As a songwriter and a musician, what are the highs and lows of being a solo artist?
Well, the highs are that the songs come straight out of me so I can play them as just me and also with the band, which mixes it up for me and for fans when they come and see a show. The lows would be when people are talking about what your band is “worth” whether it be promoters booking a show or a media outlet that is getting some sort of exclusive content or whatever – it sucks when it’s just your name and you see the conversation about what your actual numerical value is – it’s a very gross feeling – my least favorite thing about doing what I do.

Your new record Cocksure is a more straightforward rock and roll album than your previous one, Wheel. What led you to approach it that way?
Well, I had a bunch of songs written – and, like Wheel and Sit Resist, the group of songs had a serious sonic range – there were very quiet acoustic songs with just me and a guitar, more orchestral stuff, and then these rippers. I didn’t want to put out the same record as the previous one, I wanted to make something more cohesive. So I put the quiet ones aside and focused on the rock songs, which was really just fun. Working with the band, we just had a really good time together on this one. They’re so good so it was easy.

Why did you choose the word Cocksure to be the name of your new album?
It’s a really good name for a record.

For this album, you had great influences from The Lemonheads, Liz Phair, and The Replacements, to early Weezer and the Smoking Popes. What else did inspire you besides those bands?
Besides music – I’m just learning how to enjoy what I’m making. I’m trying to trust my instincts more and not edit myself to death. That’s just experience – the more you do something, the better your instincts are going to be – so I just had to trust that and go with it. It’s all about self-acceptance which is a new thing I’m working on.

Let’s talk about the place you rented and converted into a cool and laid-back studio. Tell us about that place and what was it like to work on the album there.
We got a house up in the Hudson Valley. We were all sick of Brooklyn – certainly sick of paying as much as we did – and everything was so claustrophobic, I couldn’t write in the apartment I was living in. So me and Mike and Peter and Alex got this beautiful house in this really nice little town and we could work whenever we wanted to. Kevin McMahon, who produced Wheel, suggested Sammi Niss as a drummer and she is so amazing, it’s crazy. We had many, many super long practices arranging the songs in the attic, the heat was pretty much non-existent so it was rough, but it’s so fun to play those songs together.

Cocksure was mostly recorded live with Mike Campbell, Alex Billig, Peter Naddeo and Samantha Niss, to achieve a more spontaneous and raw result, which it’s what we feel when listening to the entire album. What can you tell us about the recording process?
Well, me and Mike and Peter and Sammi just played in the big open live space. The studio is called Room 17 and the engineer there, Joe Rogers, is such an awesome person. He was so enthusiastic about the songs – it just was so positive for everyone and every take we were all just happy to play. 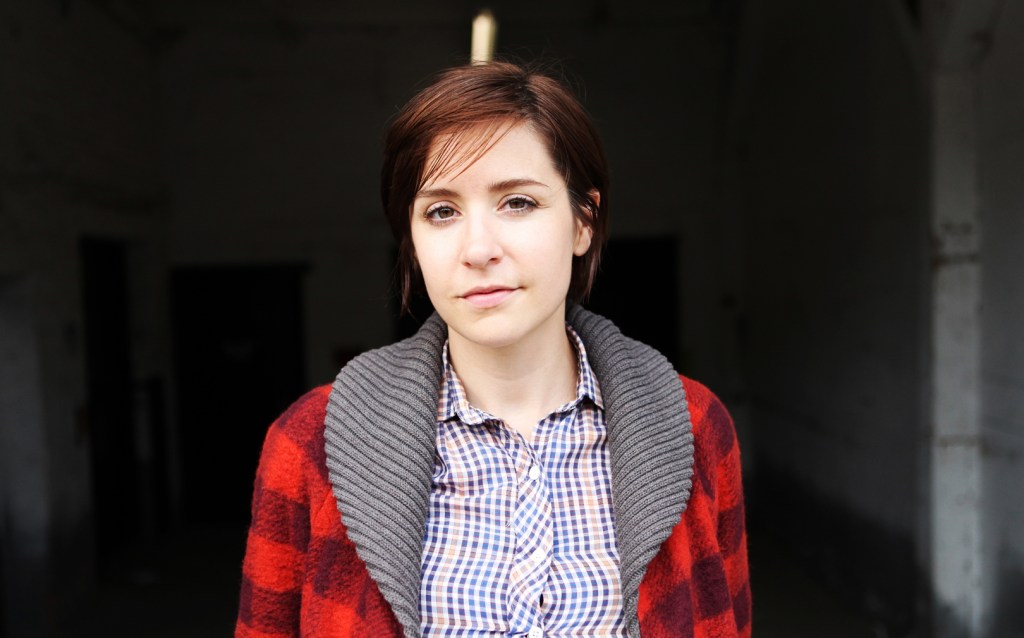 “I’m trying to trust my instincts more and not edit myself to death… It’s all about self acceptance which is a new thing I’m working on.”

The album was produced by your long-time friend and collaborator Jeff Rosenstock of Bomb The Music Industry. What do you think he brought to the record?
Jeff brought a lot of energy to the record. He has one of the best musical minds of anyone I’ve ever met so I totally trusted his instincts – sometimes it’s scary to let someone else make changes to something you’ve made – and in the studio, these changes are made pretty quickly and then, they’re permanent. So that’s a little freaky. But I know him so well and he knows me so well and we just have an understanding and it was so easy and great. It was so awesome to work with him.

What did inspire you for the track “Tom Sawyer / You Know Where You Can Find Me”?
That one is about my friend. It’s pretty heavy as far as songs go – but I left it a little open-ended, a little less specific so other people can listen to it and it can bring them some healing if they’re going through something similar, I don’t know – I like to make songs a little loose so they can be molded into whatever people need them to be.

Cocksure’s cover art has a TV with your name plus the album’s name on screen and a lot of confetti like you’re celebrating something. What about that?
The photo is by Chris Hainey. He’s so amazing. He’s the drummer of Maps and Atlases and he’s one of the best photographers I’ve ever met. His Instagram is nuts. Anyway, I gave him the record and was like, “have at it” make whatever you want that you think fits the themes and the way it sounds and everything, and he had this vision and I think it’s so perfect. It’s nostalgic and celebratory and dark and colorful simultaneously and gritty and pretty and it’s really awesome. He is seriously one of the greats.

Overall, what does this new album represent to you?
It represents me moving forward – I was 30 when I wrote it which was a bigger deal than I thought it was for me. I’m not saying I’m a good adult, but I can’t really waste time being so self-conscious and standing in my own way anymore.

With four albums and touring around the world, do you feel more sure and loose with your music?
Absolutely. I’ve always been a little loose – but I’m definitely more for sure.

COCKSURE IS OUT NOW VIA DON GIOVANNI RECORDS