Once upon a time, there were a band of bearded druids who summoned mighty tectonic rumbles from cavernous realms, existing in an underground that few knew about and who were spoken of in fevered tones in select circles – that was a hell of a long time ago. Nowadays, Sunn O))) are a cultural touchstone, the figureheads of a scene that bridges high art and sonic extremity and whose live rituals have become, depending on who you ask, worthy of adulation or derision. With this coming into the light, it makes sense that 2019 will have them deliver two albums that, from the sound of first entry Life Metal, their brightest and most joyous offering to the faithful. To give us a unique perspective on this new take on all things droney, we caught up with long-time collaborator Tos Nieuwenhuizen and asked for his thoughts on this latest evolution.

It’s always an interesting experience discussing you guys and whatever beast of a record you’ve just conjured. Since Life Metal is out now, that might be a good place to start. I heard that the title came from something of an inside joke with the band, so how does it tie in with the sound and writing of the record itself? Is it really the opposite of death metal?
No, not the opposite; just another shape of metal. Just kidding – we’re not trying to come up with a new music category. As you said, that inside joke was referring to health activities by Attila Csihar, and to sell-out metal acts. But then it turns out to be a perfect name for the music conjured up on this record. A celebration of life.

The whole thing was recorded and edited straight to tape, right? What did you think of the process and did it bring something to the table that you’d never been able to capture using other techniques? To be honest, I was a little surprised that it wasn’t something you’d tried your hand at before.
This was the first time that Sunn O))) set out to record and mix within two weeks. Working with tape doesn’t give you the flexibility of ProTool recordings, which was necessary for all those collaboration records that came since Monoliths & Dimensions. Files are easier to mail than 2-inch tape-reels. The tracks on Life Metal are pretty much all one-takes, with minimal overdubbing – one layer of guitar harmonics, Hildur’s treated cello. The less-is-more principle applied to a more=more band. And, since the band uses equipment from the 60 and 70s, why not use recording techniques from that era? After all, the best sounding records are from 1970 or thereabouts, but that might be a personal opinion.

The inclusion of Hildur Guðnadóttir makes such a difference on the record, especially with ‘Between Sleipnir’s Breaths’ opening the record. How did you settle on the arrangement and lyrics for that track? Did it help with the collaboration that you already had some history of working with her?
The song was recorded before Hildur arrived (she wasn’t there for the whole session), and we were well aware of her capabilities so when she was presented with the poem it was just a matter of fitting it. She’s a pro.

Given your long history of collaboration, I was wondering if you found there to be any real difference when working with vocalists and with instrumental collaborators. Do you choose to have much input with lyrics yourselves, or do you leave that completely in the collaborator’s hands?
In this case the lyrics were taken from an Indian poem. With other vocal contributions it was the vocalists that came up with lyrics. 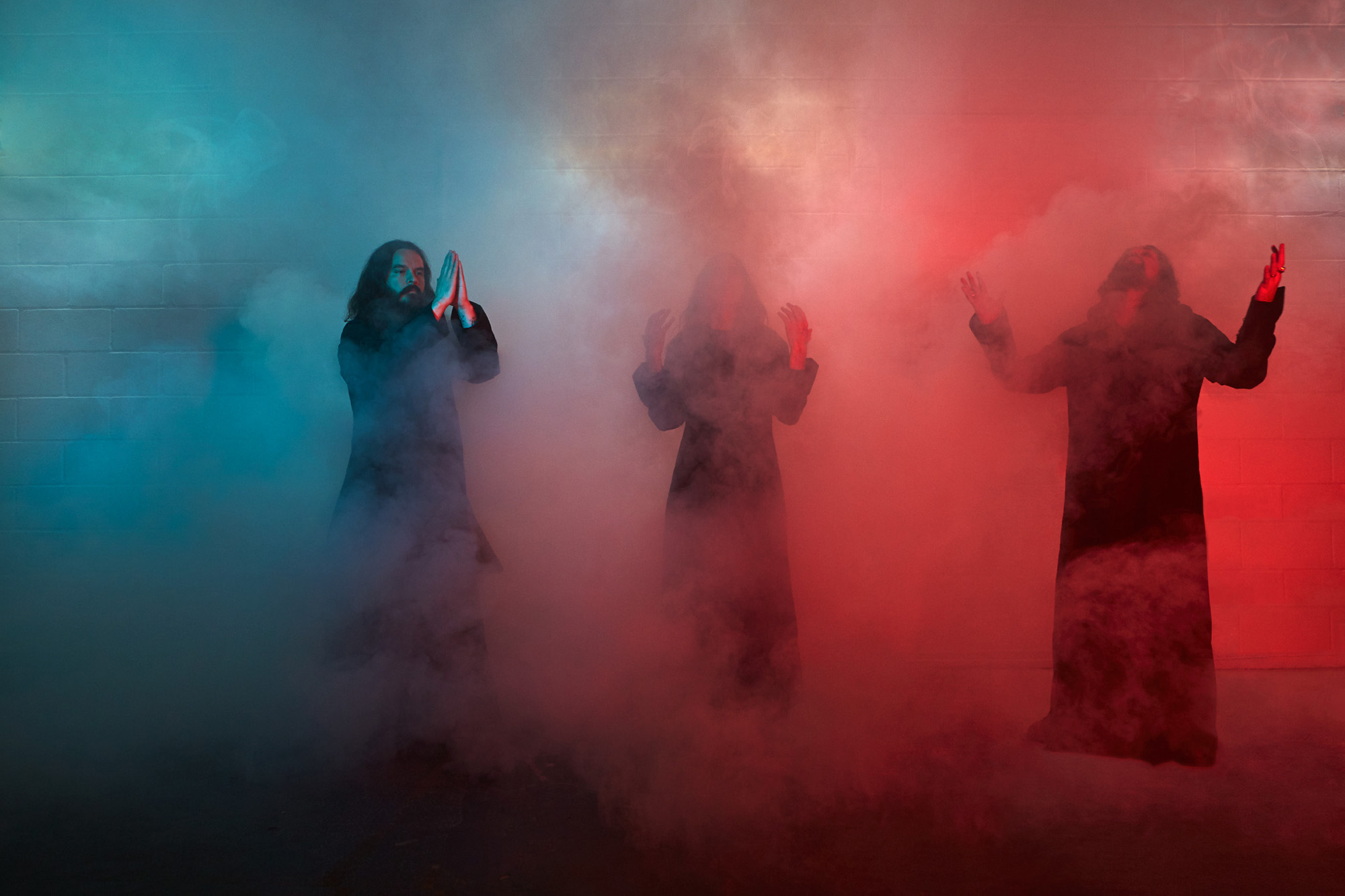 “I have witnessed Sunn O))) for 20 years and see the band develop from the slow power riffing duo to the entity it is now. I’m into waves and pulses and resonances, and the effect they can have on mind and body.”

What can you say about that cover art? It seems very abstract, especially in comparison to some of your works in the past, where there had been a definite thematic connection between the piece and the album itself.
Looking at Samantha Keely Smith’s body of work, it’s all about elemental stuff, fire, water, earth, air, and I think it ties in with the record really well, the music being pretty abstract as well and open for interpretation.

You’re also going to be releasing Pyroclasts later in the year. Given that the two were announced at the same time, is there any connection between the two records? Can they be viewed as connected, or even opposing, works, or should they be kept entirely separate?
The Pyroclasts are the product of the band’s morning exercises. Once we had the complete band together in the studio we would start the day with an improvisation in a certain key, before continuing work on the main body. They’re definitely more trance-y.

The recent passing of Scott Walker hit everyone hard, and I have little doubt that it affected yourselves as well. I was just wondering how Scott’s music had influenced the direction of Sunn O))), and what you had taken away from your experiences of working with him.
Yes, he will be missed. We were fortunate to be able to work with him on Soused, the recording of which was a great learning experience. All parts of that album were written out beforehand, all the different instruments, tempos, everything scored. Quite the opposite of Life Metal where the objective was to capture a Sunn O))) performance, more akin to ‘50s and ‘60s jazz recordings, but when it came to fitting in Hildur and Tim’s contributions I’d say there was a definite Scott influence in the arranging decisions.

People seem to make quite a distinction between Sunn O))) on record and on stage, and I think a lot of that comes down to physics – there’s a very visceral, tactile experience from watching you perform live that be either meditative or physically distressing. Do the two occupy different soundspaces, or serve different purposes, for you as musicians?
That’s quite right, Sunn O))) live is an experience that you will not get from playing the record : The sheer volume, the lights and the fog, sometimes the venue all contribute to that sensory overload that can induce a trance-like state. Meditative yes. All Sunn O))) records after 2007 (to my knowledge) are written in or around the studio, 2007 being the year Stephen moved to Europe. So with band members living in LA, Paris, Amsterdam, Seattle, there’s not a lot of jamming/practicing happening – I can remember four band rehearsals since 2003. The pieces develop quite a bit from the recordings once we get to perform them live.

You seem to research the venues you play quite well, which I imagine is as important for atmosphere as it is for acoustics. Do you have a formula or any guidelines as to what constitutes a perfect, or even an ‘apt’ Sunn O))) concert space?
We do get to play a lot of ‘interesting’ places that fit our description of a righteous venue – large rooms with a lot of reverberation work well for us, say churches. We recently played a cave in Tennessee where the stage was about 400 meters from the entrance, that place had an amazing low frequency extension. Seated theatres are cool for the audience and usually have good acoustics, there are clubs that are solid, clubs that rattle and threaten to fall apart, all those different places have an impact on the show. Some will emphasise the soothing quality of the music, others will make for a punishing experience.

A lot has been said about the spiritual and mystical aspects of drone music, with Owen Coggins’ book giving a really interesting take on the overlap between drone and ritual. Is it something that you have researched at all, or tried to factor in to your writing and performance?
I haven’t read up much on drone music/rituals/ spirituality and am not familiar with Owen’s book, will search it out though! But I have witnessed Sunn O))) for 20 years and see the band develop from the slow power riffing duo to the entity it is now. I’m into waves and pulses and resonances, and the effect they can have on mind and body.