Montreal has developed a status for being a haven for artists and for the DIY ethic community, from Godspeed You! Black Emperor to Arcade Fire, to respected and influential labels like Constellation or even Arbutus Records. With that in mind it’s easy to relate that booming experimental scene with the birth of exciting and new acts and artists over the years, like Lungbutter, Basia Bulat, tUnE-yArDs, Jerusalem In My Heart and many more. But our main focus here, is Lungbutter, the Montreal trio that are too noisy for grunge, but also too experimental melodic for a more extreme sound. Lungbutter’s debut full-length is out now, it’s perhaps one of the most accomplished efforts of this year, a relentless and chaotic sonic experience, that is both refreshingly fearless and thrilling at the same time. With that in mind with talked with Lungbutter about their debut album, the Montreal music scene, recording with Radwan Ghazi Moumneh and much more…

First of all, how would you describe yourselves to someone who is not familiar with your sound?
Loud, Noisy, Fun, Oblique, Catastrophic.

What changed since the self-release of your debut recording “Win Some / Lose Most” in late 2013 and the release of Honey? (Musically speaking and beyond that…)
Joni: I think we’ve developed as songwriters, which feels good. “Win Some / Lose Most” was recorded pretty shortly after we started playing together, so we’ve had a lot of time since then to challenge ourselves and gel more cohesively as collaborators.
Ky: Our songwriting has become more purposeful and organized, and maybe departed somewhat from the more standard punk and metal referents that we were working with in 2013. I think we’ve also developed a clearer intuition for what works and doesn’t work for our music.

What experiences do you draw on to write a core set of the material on the forthcoming album Honey?
Ky: Lyrically – Immediate personal experiences, books and papers, whatever feels urgent and living when written down. I try to very deliberately and transparently write down feelings and sensations in order to create a sense of moving across the surface of my own thoughts. It’s more of a process thing than a ‘sitting down to think about material’ thing.

What themes do you touch on thematically on Honey?
Ky: Lyrically – heartbreaks, categories, shapes, feelings, theories, framings, materialities, imaginaries. The current environmental collapse. Ephemera and ephemerality. People and the things they do.

Where and when did you record the new album? And how was it like recording with Radwan Ghazi Moumneh? I must say that I’m big a fan of his project Jerusalem In My Heart.
Joni: We recorded it in September 2018 at Hotel2Tango in Montreal. Working with Radwan was a real treat because he’s a friend of ours, and he’s done live sound for us before so he’s pretty familiar with our overall aesthetic. Keeping things a bit loose and spontaneous was important to us, and that really comes through in our live show so he was able to bring that feeling to the table. And you’re totally right, Jerusalem In My Heart is incredible!

I love the way the whole album flows, the immediacy of song after song is remarkably striking, it seems almost like a live show. Was this intentional or did it just happen?
Ky: We recorded things mostly live off of the floor, and definitely wanted to at least point towards what our live sound is like. But in terms of the flow of the album, I think that just happened.
Kaity: I think because the project has been so rooted in live shows (rather than recording) we are used to thinking about our music in terms of what works in a live set. I know that the feedback and other amp sounds between tracks was definitely done in an attempt to recreate how our live performances feel. However, this recording process was also the first time that we had experimented with recording material that had never been performed live. 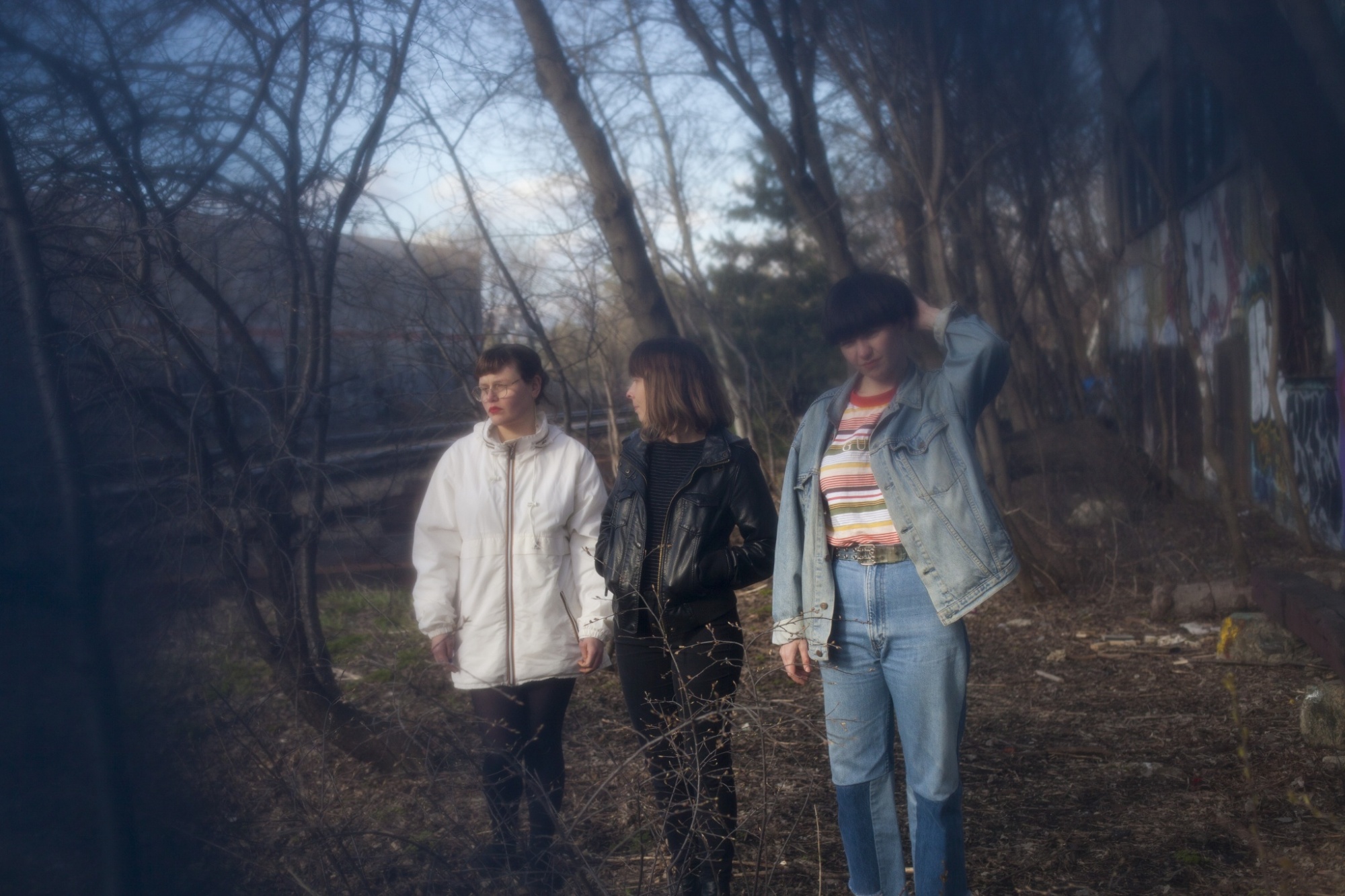 “I try to very deliberately and transparently write down feelings and sensations in order to create a sense of moving across the surface of my own thoughts. It’s more of a process thing than a ‘sitting down to think about material’ thing.”

What’s the story behind the cover image by Tommi Parrish?
Ky: Tommi was my roommate for a dreamy six months, which is how we found out about their art. I’m hugely impressed by what they do and the determined / thoughtful way they do it, as well as the emotional immediacy and ambiguity of the images they create. So we asked them if they would want to paint some cover art for us. The image is totally their doing, though Ian from the label did the graphic design.

This might be a bit exaggerated to actually say out loud, but I felt almost spiritual about Honey, it’s confrontational but damn cathartic… Does this makes any sense to you?
Ky: Haha. That’s funny, I sang for a long time in churches, and have always loved chant and traditional religious music more than almost anything else. I’m not strictly religious but there’s something very special and transformative about choral music in particular. I think that probably filters through into our music a bit. It’s powerful to make exactly the music you want to make with friends, and it makes space for confrontation and catharsis, as you say.
Kaity: This is a really nice thing to say! I think we all want our music to have tones or qualities that don’t neatly fit into the categories of “heavy” / ”aggressive” / “noisy”, so knowing that you heard elements of it that felt relieving or welcoming in some capacity is very affirming!

Daughters or Sonic Youth?
Joni: Sonic Youth, for sure. That said, I saw Daughters play here in Montreal a little while ago and was definitely impressed with their live show. There’s room in my heart for both.
Ky: I went on tour with Big Brave (as their front of house engineer) for a few dates that they played with Daughters, I have to say from my brief encounter I really like that band, both as people and as musicians. I don’t think I can really choose, though, Daughters and Sonic Youth are doing something totally different from one another and both things are awesome. I didn’t start really listening to Sonic Youth until maybea year ago (dorky to admit, I know), but I really love Body/Head, so there’s that.
Kaity: Imagine if we tried to pretend that we weren’t somehow influenced by Sonic Youth!! So respects must be paid.

Can you talk about three records that are blowing your mind lately?
Ky: The new Big Brave album, A Gaze Among Them! It’s so fricking amazing, fiercely minimal and carefully paced and tense. Also the album Filament, by Petra, an artist from Providence, RI. Just wild and weird vocal work. Mary Halvorson Quintet, Saturn Sings– definitely been out for quite a while but still blowing my mind right now. The guitar lines are really satisfying.
Kaity: Lately I’ve been listening to Alan Bishop, Sam Shalabi, and Maurice Louca’s trio The Dwarfs of East Agouza’s most recent record Bes, which is full of really wonderfully peculiar guitar and synthesizer sounds, and amazing percussion. It’s one of those records that allows you to either study and appreciate the strangeness of each instrument’s tone and the kind of dissonant patterns they are following, or you can sitback and let it wash over you as a really hypnotic whole. I have also been regularly re-listening to Carlyle Williams’ Gotta Go For It, which is the probably the most truly psychedelic thing I’ve ever heard! And finally my go-to walking around just trying to tap into the joy of life is, Prince’s Sign O’ The Times – one of the great treasures of human history!
Joni: The new Big Brave album is really, really good. I’ve also been revisiting Nü Sensae’s self-titled record, which came out around a decade ago and was really influential at the time. Once in a while I take a deep dive through the record collection and find myself falling head over heels for a beloved album all over again, which is definitely the case here. The new Holly Herndon album Proto is blowing my mind in unexpected ways – to be totally honest I’m not even sure whether I like it or not, but it’s so bizarre and innovative that I keep finding myself drawn to it. The way she uses technology is definitely inspiring.
Ky: I also second the Dwarfs of East Agouza rec – I’m kind of obsessed with them too!

How’s the current Montreal scene? Any new bands or artists we should look for?
Ky: The current Montreal scene is actually a bunch of smaller scenes, I think. But in terms of recommendations, some of the new-er bands we’ve been super stoked on lately are Beep Test, Eliza Kaviton, Rivalled Envy, Tamayugé, Kee Avil, Mutually Feeling, Neighbour’s Guitar…

If you’re willing, here’s a chance to talk about anything you like for a couple of hundred words or less…. So, is there something you’re passionate or do you wanna talk about right now? Anything! Really!
Lungbutter: Dogs! We all love dogs!
Joni: On a more serious note, it feels important to talk about the rulings on reproductive rights in Alabama and other parts of the US. The situation sets a terrifying precedent and has some very dangerous ramifications, so it’s been weighing heavily on my mind since the bill was signed in.
Ky: Yeah, it’s really fucked. We have to act now if we want to prevent similar things happening in Canada. Criminalizing abortion is basically a move to regulate who gets to fuck and how – as well as a move that puts any person with a uterus in danger of criminalization.

Here are some resources for those who want to learn more or show support:
– Planned Parenthood
– Center For Reproductive Rights
– American Civil Liberties Union (ACLU)