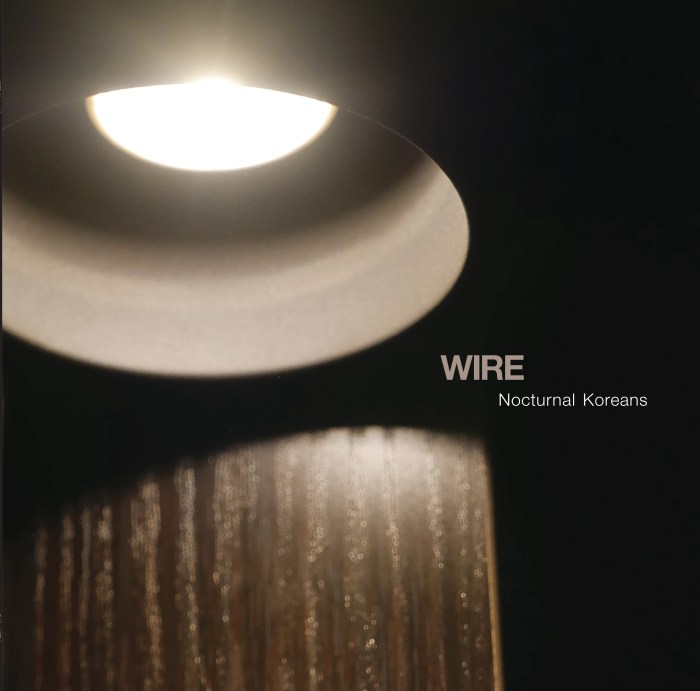 The last ten years have seen Wire revitalise themselves to a degree unlike any of their punk/post-punk/whatever contemporaries. Not for them any touring of seminal early works, wayward live excursions offering no direction forward, but never ending road hogging or record releases which trade on past glories but half-heartedly lead nowhere.

Early 21st century Wire vintage is a streamlined, turbo-boosted power-pop proposition which steamrollers forward with razor sharp intelligence and precision. Following on from last year’s self-titled rebooted consolidation, Nocturnal Koreans finds Wire playing to their strengths across a 25-minute mini-album, which crams in more detail and texture to its eight songs than many groups manage in a career defining magnus opuses. The opening title track, “Internal Exile” and “Dead Weight” barrel along atop bass-driven propulsion while guitars buzz and shimmer around the song like swarms of chrome-plated insects. Then, you get a track like “Forward Position” which looms through a fug of nocturnal disillusion, hissing regret and broken promises to some still-present betrayer of trusts.

After nearly forty years together, off and on, it becomes questionable why any group of grown men still persist in playing together. Wire continue to prove that not only can the rock group, itself a wildly outdated proposition, remain relevant and vital, but also that there are tiny new frontiers to be carved out of the three-minute pop song.

For Fans Of: Gang Of Four, Mission Of Burma, The Fall